"Yo soy Fidel" was heard during the mass protests in Cuba a few weeks ago, and it was a chant in favor of the Cuban government. Simply consuming western mainstream media, one could come away with the impression that the protests were against that government, which is a bold faced lie, of course... 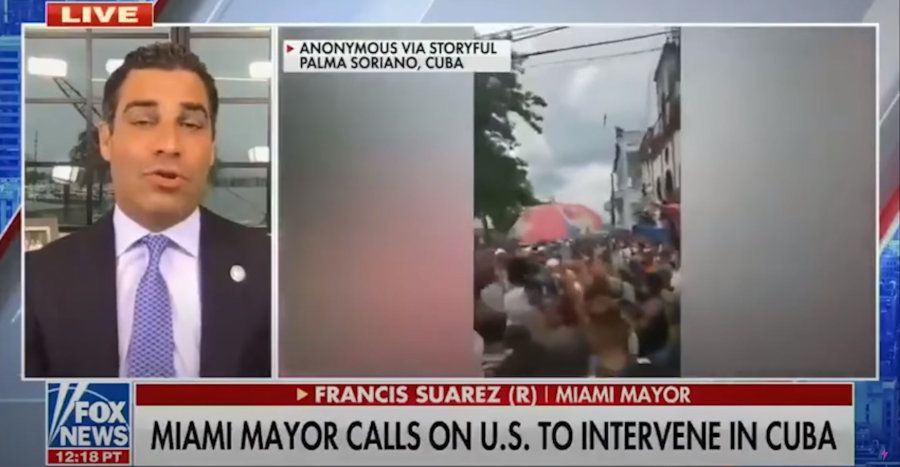 It's really tiresome to go through and untangle the pervasive web of propagandistic lies coming from the world's largest military and economic power. The recent protests in Cuba are just the latest attempt to spark a counter-revolution in the country that refuses to bow down to the mighty U.S. Despite America's best efforts, the Cuban people and their revolution have survived more than 60 years. Yes, the country has suffered U.S. sanctions for more than 60 years, being cut of from food, medicine and other vital goods, and still has better literacy, lower child mortality and higher life expectancy than mighty Uncle Sam.

What's true about the mainstream reporting is that there were indeed protests in Cuba. Besides suffering from the sanctions, the country has lost most of its income because of the severe dip in tourism over the past one-and-a-half-year due to the pandemic. This has put the Cuban economy in a tight spot leading to further shortages. Yes, the Cuban people are disgruntled, and yes, they did protest. But those protests were small, and the president immediately addressed the Cuban people, admitting to the difficult situation. He also pointed out that some of the anti government protests were initiated by pro-American initiatives, mainly through social media, and he called for the people to rise up against these false protests. And... the people answered by taking to the streets to protest against the handful of anti government protesters. The images we saw of mass protests in Cuba were the ones in favor of their highly popular government. Sometimes pictures were used with mass protests from other nations, or old footage of Cubans celebrating one of their national holidays.


The Truth About The Cuba Protests

Let me just share with you a snippet from a 1960 memorandum from the American Deputy Assistant Secretary of State, with the subject title "The Decline and Fall of Castro":

...every possible means should be undertaken promptly to weaken the economic life of Cuba. If such a policy is adopted, it should be the result of a positive decision which would call forth a line of action which, while as adroit and inconspicuous as possible, makes the greatest inroads in denying money and supplies to Cuba, to decrease monetary and real wages, to bring about hunger, desperation and overthrow of government.
source: Office of the Historian

That same document says that "the majority of Cubans support Castro," and that "militant opposition to Castro from without Cuba would only serve his and the communist cause." I hope this leaves no doubt in your mind what the goal was from the very beginning. And now, more than 60 years later, American leadership saw their chance to once again attempt a color revolution. Biden didn't hesitate to announce new sanctions on Cuba, and several Republicans could once agin not hide their abject extremism; Miami mayor calls on Biden to consider airstrikes against Cuba, and Republican Congressman Anthony Sabatini calls for execution of Cuban leaders.

I've said it many times; never believe what mainstream media tells you about countries that dare oppose America's preferred ideology. Never. I've included two videos with some much needed truth about the history of the Cuban-American relationship and the recent media campaign against its government. Please watch them both.


You shouldn't be supporting the Cuban protests