"People get confused. Companies get confused." There are the first words we hear from Steve Jobs in the video I share with you today. In it Jobs tries to make the case that Apple, unlike many other successful companies, hasn't lost its capacity for innovation, because it never confused the production process with the product. And here I am, making the case that Jobs is confused about Apple... 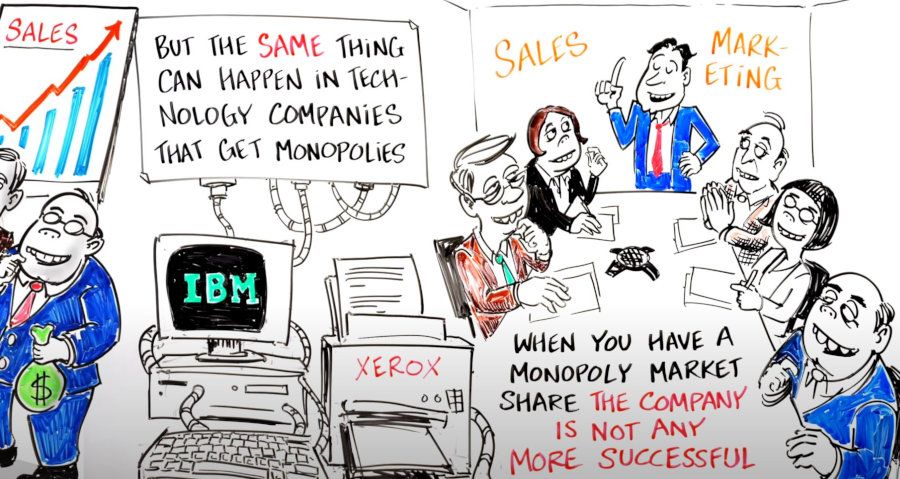 The title of the video is "Why Big Companies Make Bad Products". Well, Apple is a big company, the biggest of them all measured by the total worth of their stocks if I'm not mistaken, so I was curious if Jobs would go on to explain why Apple makes bad products. I started the video in anticipation of a surprise, because as far as I know, Apple's products aren't particularly or exceptionally bad. They're just as bad as all other manufacturer's products, and they all make their products bad because of the same reason. As far as I know, that is. So I was ready for Jobs to surprise me.

And he did surprise me. I already knew he was a charlatan, but in this little video he takes his quackery to a whole new level. Apple's products, the iPhone in particular, are often hailed as the prime examples of the creativity and innovation that the capitalist free market system brings about, and they've elevated the admiration of Steve Jobs to messianic levels in the minds of millions of people. And that's because of the things he says in this video.

People get confused. Companies get confused. When they start getting bigger they want to replicate their initial success. - Steve Jobs

The audio from the below linked video is taken from "The Lost Interview" with Steve Jobs from 1995. He goes on then to describe how companies, after they've reached a near monopoly, begin to confuse the process for the product; he explains how, to maintain their success, these companies put in charge people who understand marketing and sales, and forget about making good and innovative products. He claims, by implication, that under his reign Apple never forgot about innovation, never lost sight of the ball... Be successful by inventing and making better products. This, coming from Jobs, would be laughable if it weren't so utterly cringeworthy...

Apple the company and Steve Jobs the man have never ever invented anything. It's aggravating to see him use IBM and Xerox as examples of companies that "did it wrong", when IBM invented the personal computer, and the mouse and the accompanying graphical user interface were stolen from Xerox. The iPod was just a portable MP3 player that was already invented and produced by a number of companies, including Diamond, Creative Labs, and Sony, not by Apple. What Apple did was to build in the rechargeable battery, forcing consumers to buy a new one when the battery died. That's Planned Obsolesence, the real reason why big companies make bad products...

Apple is the prime example of a company that doesn't invent but instead imbues their products with a sense of status through marketing and aesthetics. And they are practically the inventors of Perceived Obsolescence, which is when a customer is convinced, that he / she needs an updated product, even though their existing product is working well. The iPhone, like any other smartphone, is just a collection of existing technologies crammed into a handheld device. And most of those technologies were developed with public funding, at universities and government research labs. Jobs said it best himself when he admitted, in that same interview, that "all I care about is success".