One thing is certain: capitalism has to end. The only question is how it will end; will we continue business as usual and let the damn thing implode, taking us with it? Or do we wake up to the errors of our ways and try to prevent the total collapse of society that's in our collective future? 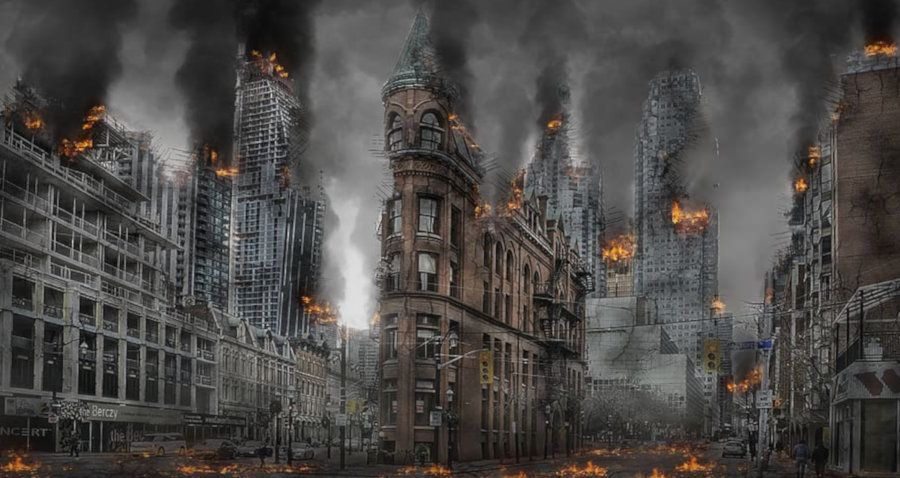 Have you ever heard of the "Club of Rome"? It was founded in the year of my birth, 1968, and consists of one hundred full members selected from current and former heads of state and government, UN administrators, high-level politicians and government officials, diplomats, scientists, economists, and business leaders from around the globe. We can summarize that as "the ruling elite" or their representatives. And this is just one of the organizations or events in which the ruling elite come together to plan our collective future and decide how they'll manage and shape our collective behavior to realize the future they envision. In 1972 they predicted the total collapse of the economy, and with it society, that's now on our doorstep. Here's a banner-text from their homepage:

Decades of exponential growth in both population and consumption are now colliding with the limits of the Earth’s biosphere, destabilizing the very foundations of intelligent life as we know it today.
source: Club of Rome

The 1972 report was titled "The Limits to Growth," and in it they basically said what anyone with a working brain could have worked out for themselves: capitalism's mandate for profits and growth will eventually clash with the planet's limited resources. Capitalism, in other words, will have to collapse. It's not if, but when. And "when" is now projected to be around 2040. Now you may ask: why didn't this centenary of the world's smartest minds come up with measures and proposals to prevent capitalism's doomsday? If you have to ask, I'm afraid you're not aware of just how far the ruling elite is willing to go in order to maintain their positions of power and wealth; they never intended to prevent this economic and societal cataclysm. "Never let a good crisis go to waste" has been their motto since the dawn of civilization...


“You will own nothing, and you will be happy”? | The Great Reset

Another place where the ruling elite meet on a regular basis is in Davos, at the World Economic Forum, and here we can catch a glimpse of their plans, how they intend to use capitalism's downfall. Have you ever heard politicians, pundits and other prominent figures use the phrase "build back better"? I'm sure you have, as it was the agreed upon global catchphrase at Davos this year, alongside with the equally sinister "Great Reset." In an information video on their website they say: "you'll own nothing, and you'll be happy," followed by "whatever you want you'll rent, and it'll be delivered by drone." The drone will be owned by Amazon, the search engine used to find the product will be owned by Alphabet Inc. and the computer you searched on will be owned by Microsoft. Or something to that effect. The point here is that this picture is nothing short of the corporate takeover of the world by the corporations that caused the total collapse in the first place.

The current covid-19 crisis is already being used to gently ease us into this dystopian future. We're already being told that there's no "going back to normal." What I find so disheartening is that millions of people intuitively feel that things aren't right, they know they're being duped and screwed over by forces that are completely out of their reach and outside their sphere of influence, they know that democracy is a sham and that their politicians are puppets for the corporate elite who are slowly but surely taking over the entire planet, but they direct their indignation and anger at the wrong enemies. Forget QAnon, forget "communists are taking over," forget "stop the steal," just forget all those stupid conspiracy theories already. What we're facing here isn't a conspiracy; they're planning their takeover out in the open. And the vehicle they've been using all these decades is called "capitalism," not communism, not even fascism.

All of the above is easily explained if you have a correct understanding of what capitalism is. I've tried to explain this many times, so this time I'll quote the tweet that's also used in the below linked video on the coming collapse of society:

"Capitalism means that a small minority owns everything required to meet human needs. Unable to meet their needs independently, the majority have to sell their labor to the minority for less than it's worth in exchange for a wage with which to purchase their own means of survival. By definition it does not work for the good of any national category of people. It works for the good of one class, the capitalist class, which is perpetually rewarded with profit for already owning what society needs to reproduce itself, at the expense of everyone else."


Societal Collapse ‘On Schedule’ According To 1972 MIT Study