We need 'immunity passports'... while you can still spread virus if vaccinated

Some of us might recall how all the way back at the beginning of this falsified pandemic, Bill Gates was telling us how the only solution was going to be vaccines. It had already been decided that there would be no permissible treatments other than vaccines. While not traditional vaccines, their actually experimental injections which are gene therapies that are synthetic chemical pathogen producing injections that make cells produce something they normally wouldn't.

Only these experimental injections could save us. And not only that, Gates was telling us that we would need vaccine or immunity passports in order for life to return to normal. But it wasn't really going to be normal, it was only going to be a semblance of normal.

You see, well that is, those of us who have the eyes to see in the ears to hear, saw what was coming down the line. We could talk about how professed experts in pandemics and virology such as Bill Gates who is not a medical expert, was being positioned as the authority on what was going to happen. Gates was telling us what was going to happen, because this was all planned in advance. But when you try to tell people that they're going to deny any other treatment, that they're going to create immunity passports is the only way for people to have freedom, well you just get called a conspiracy nut job even though you are right.

So the big joke around the these experimental injections, is the claim that they are effective while not actually being effective. All they do is make you have less severe symptoms, according to the manufacturer's own stated purpose of the trials. Which means you're still actually sick, but you just don't show minor symptoms, and this means you're also able to infect other people because you're actually sick but your minor symptoms are being masked and hidden.

In contrast, you could actually not have this experimental injection which hides your symptoms, and actually know that you're sick, and then actually be able to and not be around other people to potentially spread the sickness to them. Apparently that doesn't seem wise, to know that your sick and avoid getting other people sick. Apparently it's wiser to have your sickness covered up so you can keep spreading it to other people. That seems to fit into the agenda to keep a sickness spreading while pretending your stopping it. That way you can keep all these draconian measures in place and push forward with your agenda to reshape the world in a bio security state. 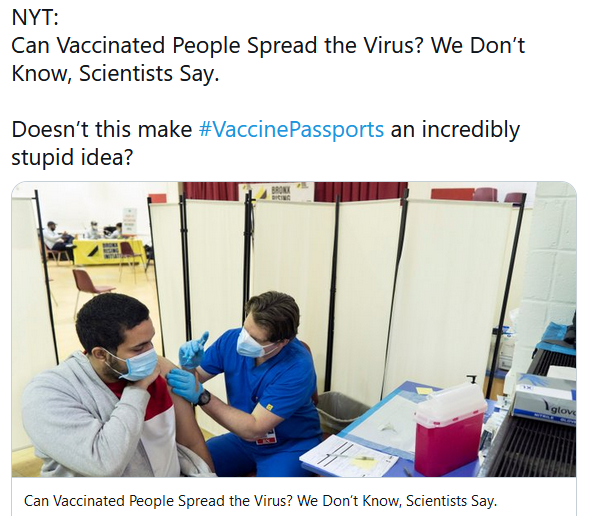 The New York Times admits that it's not known if people who received experimental injections will not spread it. Because this was never an intended goal to accomplish in the trials. Maybe it'll happen. But they don't know. To me that translates into a know it won't.

In this article came about as a result of that newly appointed dimwit of a CDC director claimed that people who receive these experimental injections don't carry the virus. But the data from reality does not back this up, and that's why researchers push back against that claim and the New York Times reported on it.

They will just tell people whatever suits their agenda at the time. They say opposite things in order to confuse people, and does get you to believe whatever they're telling you, just like in Orwell's 1984 where you've always been at war with one country, and never the other, yet the next week they tell you it's the opposite.

They tell you that the vaccinated aren't infected, in order to make people believe that they work to stop the spread of the virus, which will usher in a return to normal. As long as everyone gets the experimental injection. Then they tell you that you might still have the virus, but maybe you don't spread it, but maybe you do, they just don't know.

Regardless, there's gonna keep pushing forward with their immunity passports in order to restrict people's freedoms and destroy our way of life by creating different classes of people who don't bend over to medical tyranny in the bio security state. It seems that Israel is where this is being pushed the hardest and fastest. Take a look for yourself from this testimony.

'Freedom passports' are the future of our tyrannical state of life.