In more ridiculous blind support of a poorly tested, experimental genetic therapy injection that uses synthetic chemicals to produce a pathogen from within your own cells, Israel has gone full-dipshit on it's population.

All over the world, you have government 'officials' and so-called 'health experts', recommending pregnant women be given this risky 'covid' injection that only stops mild symptoms from developing, which essentially masks the fact that you got sick and allows you to potentially spread it to others.

That's why everywhere this is pushed, they say you still have to wear a mask, social distance, etc etc. But hey, we're going to give you a virtue-signalling 'passport' to allow you to do things and go places that the un-injected are not allowed to. Makes sense right?

It's even on the FDA site, how this has NOT been tested on pregnant women: 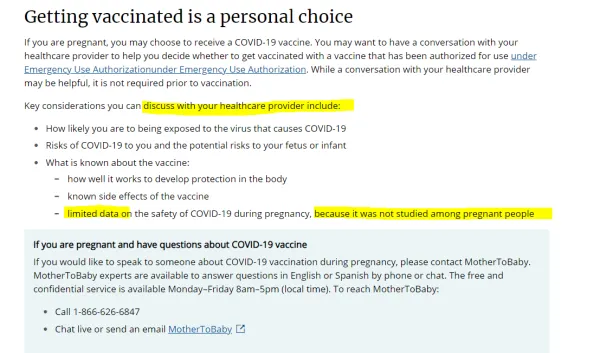 But whatever, lets just repeat the brainwashing message that "vaccines are safe and effective", "the covid vaccine is safe and effective". Anyone who says otherwise, is ignorantly anti-vax, is a conspiracy nut, a Q-anon twit, or even a domestic terrorist, right? You're putting people's live in danger! Wrong! The ignorance of this medical tyranny is what is harming people.

Derrick Broze has written about the now-former chairman of the Israel Medical Association’s ethical board resigning in protest over the ISraeli governments decision to 'vaccinate' pregnant women.

In a statement to an Israel news station, Prof. Eran Dolev said:

“...I said pregnant women shouldn’t be vaccinated, as no company had tested for it... my position was rejected... I said at least have them sign an informed consent form... rejected”

So first he states the fact that none of these injections have been properly tested for pregnant women (let alone everyone else either). But these people don't give a shit about that. Then he says,w ell at least inform them of this fact and potential risks to their health, or to the unborn baby. Nope, we're not going to allow that. Onward we march to medical tyranny and mass experimentation!

Someone who actually cares about the ethics of what's going on with this 'vaccine' craze had to quit in protest because the politics just don't care about what is actually better for people. None of the claims of safety are legitimate. It's a mad house out there, and the sane people are vilified.

If they cared about safety, then this guy wouldn't have quit. They would have listened to his reasonable facts about the injections. How many pregnant women have actually been killed from what's allegedly COVID-19, huh?

All he wanted was people to sign informed consent forms, but they refused. They don't care about your health, the risks or informing you of them. Even in regular drugs, they warn against use in pregnancy. Such as aspirin, that has been shown to have issues taken during pregnancy. The new 'COVID' injection, it's just "whatever, go ahead and take it if your pregnant, totally safe" they say, even though it's not even been a year that its been used by people. What a sick joke.