Diabetics at higher risk of blood clots, but urged to get blood clot risking shots

Yes, that is accurately what is being recommended. Despite the pre-existing risks to diabetics in general, they are apparently being urged by some 'experts' to get the shot that can lead to blood clots... and death. 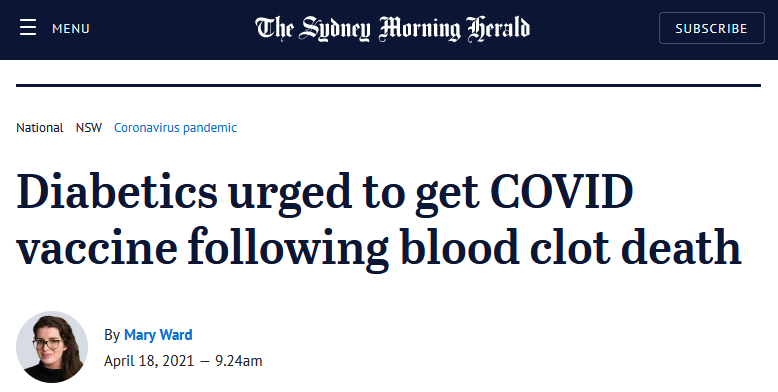 Diabetics are being encouraged to continue coming forward for the coronavirus vaccine, following news that a 48-year-old woman died after developing a very rare blood clot condition likely linked to her recent AstraZeneca shot.

People with type 1 and type 2 diabetes are at increased risk of some types of blood clots, but experts said there is no evidence to suggest they run a greater risk of developing the rare condition believed to be caused by the AstraZeneca vaccine known as thrombosis with thrombocytopenia syndrome (TTS).

I have to give credit to this Sydney morning Herald newspaper, because at least there saying a 'likely link' between the AstraZeneca shocked and developing a blood clot condition. In many places they still saying that there is a possible link, not even likely. So this is a step forward and actually admitting that there's a problem with the experimental injection.

This article is very odd. It seems like the type of journalism and reporting which simply regurgitates information without giving any judgment in doing any logical analysis themselves. They're merely stating things and expect you to add two and two together. Which is fine, but it really shows how much they avoiding stating things that are perceived as not helpful towards the mass vaccination effort.

The Therapeutic Goods Administration’s vaccine safety investigation group concluded on Friday that her death was likely linked to the jab, but it remains under investigation because of the unusual clinical profile of the case, the regulator’s head, Professor John Skerritt said.

So even though they have no other reason to explain the sudden blood clot, at least at the moment, I guess they're hoping to find something else to explain it so it remains under investigation. What is this unusual clinical profile of the case? I think that's a political issue related to vaccinations. You don't want to be saying that vaccines a vaccine, or really an experimental injection, killed someone.

But don't worry, go ahead and get one anyways if you have diabetes. Increasing your risk that much more doesn't seem to matter.