To get things done in the world, to make things happen, it requires more than thoughts and emotions alone. It requires engaging, creating and acting in the shared external objective reality.

First we are being internally, and then we are doing externally. Being comes first, but the doing is what we work towards accomplishing in order to accomplish tasks in the world, but it build a home or live in peace with others.

True philosophy is based in moral truth and determines our conduct in life to act rightly. What other form of love of wisdom is there truly? Is the love of wisdom to act foolishly? To act immorally? To act amorally? A way of living not based in moral truth is not a philosophy but an ideology that leads one astray into foolishness and suffering, be it for ourselves, others or both. The “love” of wisdom to behave and conduct our lives in a way that is conducive to producing rightness, and reducing wrongness, is how we heal ourselves and the world from its current condition. 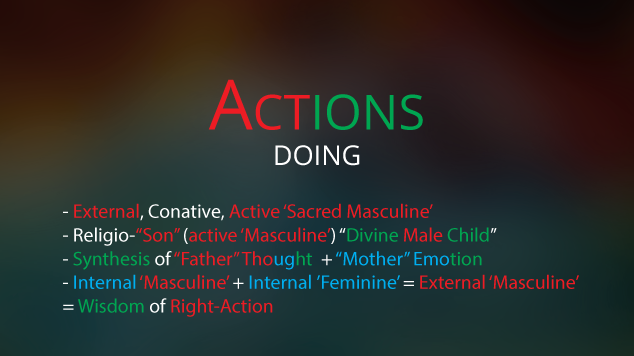 Actions are external, and symbolically represent the active sacred masculine, the counterpart to the receptive or passive sacred feminine. Action is conative in terms of the scientific description as a trinity of the cognitive, affective and conative theory of mind. Thought, emotion and will or volition is more accurate as the trinity, but all action derives from a will do act. Without the will to act, the only actions or behaviors would be automatic ones, like breathing or swallowing for instance.

In the Christian trinity there is Jesus as the “son of God”. “God” was the father, internal active masculine symbolism, while the “son of God” is the external active masculine representation of ourselves. There are other trinity’s involving a father and mother that produce a divine male offspring, such as Osiris, Isis and Horus. The original “Madonna and Child” symbolism likely comes from mother Isis and child Horus statues.

The divine male child, is masculine and red, but also green because actions are the result of a synthesis between thought and emotion. The divine child is produced from the unification of the masculine and feminine. The alchemical wedding of the father (the internal masculine qualities of consciousness), and the mother (the internal feminine qualities of consciousness), harmonize and unite to produce an external masculine synthesis.

The optimal type of actions are right-actions, as opposed to wrong-actions. These are wise actions. A synthesis of knowledge and understanding produces wisdom. Thoughts and emotions are the internal, unseen, hidden “spirit” aspects of consciousness. When they are unified in harmony, non-dual, non-contradictory, not in opposition and are aligned with what is right, good and true, as a truly “unified mind” and “one eye” with a developed “heart-care” center, then we produce wisdom of right-action. Actions can be good or evil, and even contain qualities of both. Discerning right from wrong more effectively allows us to better progress in our lives together.