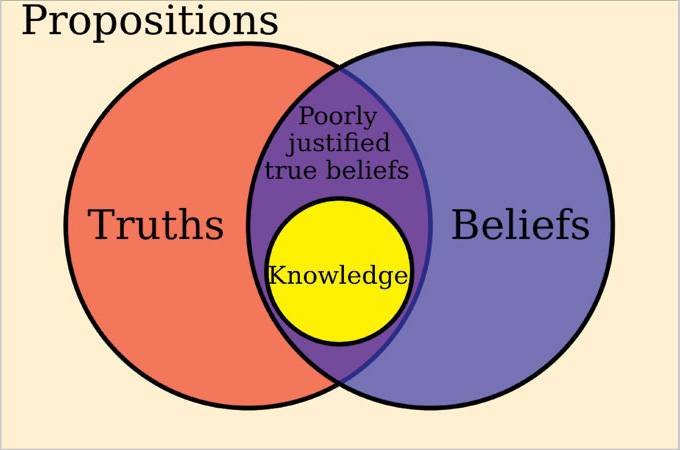 You have to be justified in your claim of knowledge. There has to be some justified basis for making that claim you believe to be true. And it also has to be true. You don’t actually know your belief is true. This definition of knowledge is to equate knowledge with truth, except that the knowledge isn’t known to be true by the person saying they know something. Hence why it’s a belief. I have talked about the difference between truth and belief.

For example, someone says they know it will rain next week because the weather man said there is a 90% chance of rain. It’s a justified belief, but not a justified true belief. The truth of that claim can’t be determined at the time. Future events haven’t happened yet. They don’t exist yet and therefore aren’t true or false. It’s more probable to be true than an unjustified belief where you believe it will rain next week without looking at the weather report. Another example is of a broken clock which is correct twice a day. Making a claim to know the time would not be a justified true belief, since the clock is broken and isn’t actually telling the time. You might just happen to be lucky and have the right time by looking at.

There are objections with justified true belief as the definition of propositional knowledge-that claim. There are hypothetical examples where you can be justified in your belief being true, and normally it would be, but a perceptual deception imitates reality and is therefore not real and not true, therefore invalidating that knowledge as being a justified true belief since it’s not true. I invite you to go look into epistemology more if it interests you.

Knowledge is input of information. False knowledge and true knowledge. You believe something is true but isn’t. That knowledge affects you and your decision making.

They try to make knowledge one thing, with one specific narrow definition. But like with the word truth, it’s not just one simple definition for how the word references reality.

There is knowledge you know is true, and knowledge you know about. The one you know is true is where you can apply the word truth to it because it was demonstrated to you, that you verified it to be true. The other knowledge is knowing about something. It’s an awareness of the information as knowledge. This makes two levels to knowledge. One is a claim of what is in reality, existence, or what is true. The second level is knowledge demonstrated and verified to be true. Even if you can’t verify some things to be true yourself, you can use logic and compare, contrast and correspond other knowledge to evaluate and judge what is more likely to be true compared to something else.