Lysander Spooner... do you even know who he was? I personally think he was an incredibly interesting person in history.

I have written about Lysander Spooner quite a few years ago. It has been awhile. I think it is time again to revisit this eccentric and brilliant historical figure. Those of you that have not heard of him or perhaps you may have heard of him as the nutty guy who attempted to compete with the U.S. Postal Service. That is usually the limit of what people learn about him if they learn anything about him at all. He was so much more than that. If we mine his works of literature, speeches, court cases, and more they are a veritable treasure trove of wise quotations. I will be providing many images I pull from various image sites that represent quotations from this man. Yet I would also like to tell you a little bit more about him than just the fact he competed with the U.S. Postal Service. 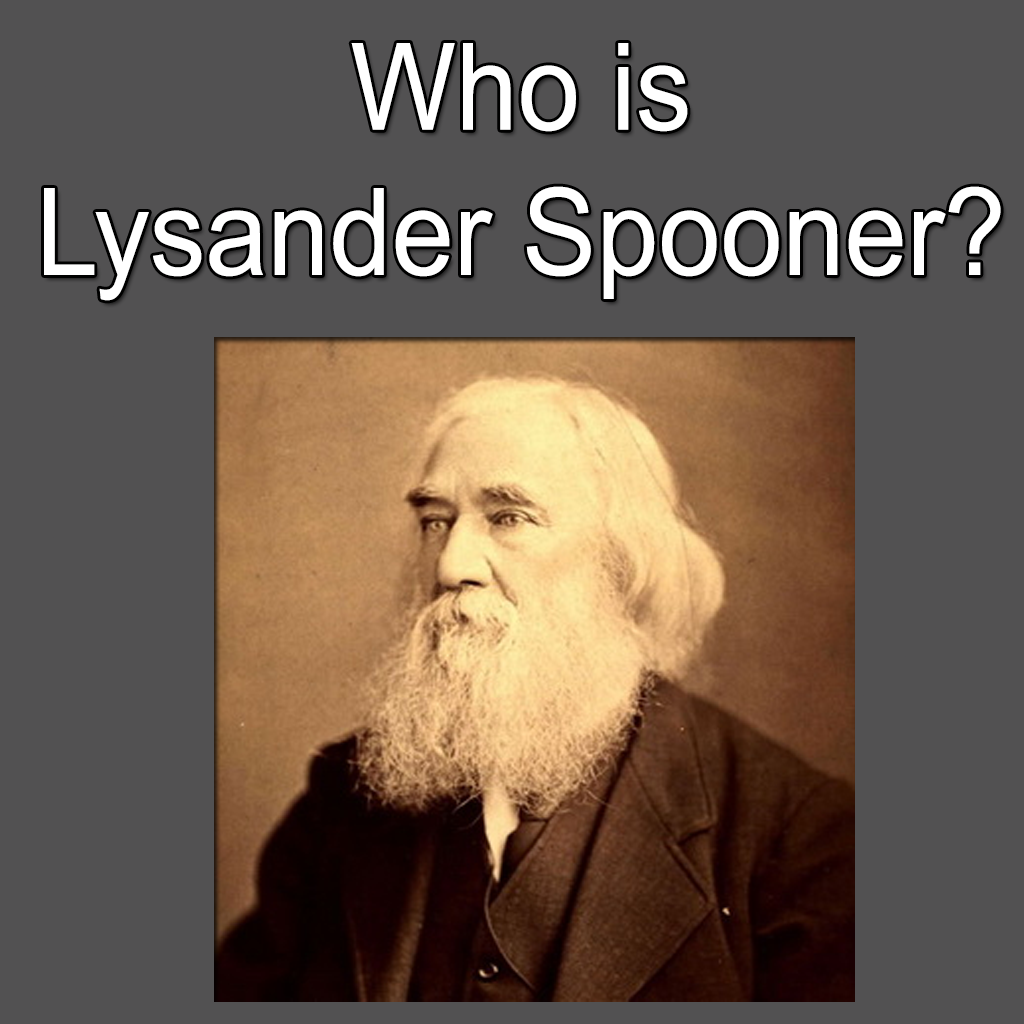 Lysander Spooner was born in 1808 and died in 1887. He thus was not someone we would call a "Founding Father". In some sense he might be an "Unfounding Father" yet don't let your mind jump to conclusions just yet. He was a wise man who truly cared the most about freedom. He cared strongly about freedom for everyone. This put him at odds with some of the founding principles of the United States. Yes, that is where this particular historical figure was active. He was active in the United States,

He is called by the Mises Institute an American individualist anarchist and legal theorist.

Wikipedia on the other hand refers to him as an American individualist anarchist, an abolitionist, entrepreneur, essayist, legal theorist, pamphletist, political philosopher, Unitarian, writer and a member of First International.

In this case I actually like Wikipedia's description. Lysander Spooner is someone I didn't know about but I have admired him, his works, and the things he tried to do since I discovered him a little over half a decade ago.

Lysander's father was a Deist which is what I myself claim to be. Other noteworthy people that were Deists were Thomas Jefferson, and Thomas Paine. Being raised by such a father the free thinking, and make up your own mind type of approach that I have raised my children when it comes to religion is likely similar to the environment Lysander was raised in. Though Wikipedia does state Lysander was a Unitarian. That isn't that far of a leap from Deism. Before I became aware of Deism about the only church I was considering attending is what is known as Unitarian Universalist otherwise known as UU. In the modern time the Unitarian movement of which Lysander was part of has merged with the Universalist movement. This is where UU comes in. It is still too formal even for my liking. It is highly tolerant of different religious perspectives and welcomes all faiths, but I myself do not believe in revelation, or religious texts as being the word of God. To me they are the word of man attempting to explain observations about God. For me Deism does the trick. That is the last I am likely to say about religion and Lysander unless in my journey to tell you more about him I come across any noteworthy quotes or moments that are related to it.

With the support of his mentors he became a lawyer after only three years studying under them and without attending college. Already the rebel...

Wikipedia stated the following with regards to the three years given to college graduates only:

He regarded the three-year privilege for college graduates as a state-sponsored discrimination against the poor and also providing a monopoly income to those who met the requirements. He argued that "no one has yet ever dared advocate, in direct terms, so monstrous a principle as that the rich ought to be protected by law from the competition of the poor".

In 1836 the legislature abolished the restriction. If you read the works of Lysander and as you encounter the quotes which I will be sharing shortly you will likely notice he was a man of very quick and unique mind. He was likely not someone people were too keen to cross mental swords with. His mind seems to be the type that would welcome such an exchange. It is also likely why his mentors encouraged him to open his law practice in Worcester, Massachusetts even though he was two years short of the current legal requirements.

He opposed all licensing requirements for lawyers, doctors, or anyone else that was prevented from being employed by such requirements. For Spooner, to prevent a person from doing business with a person without a professional license was a violation of the natural right to contract. Spooner advocated natural law, or what he called the science of justice, wherein acts of initiatory coercion against individuals and their property, including taxation, were considered criminal because they were immoral, while the so-called criminal acts that violated only man-made arbitrary legislation were not necessarily criminal.

If he is looking at the world today he must be trembling with rage in his grave. There is more of this type of discrimination and authoritarianism in the world today than anyone from his age likely even could have imagined.

By 1840 his legal career had failed. He returned to his father's farm.

Now in 1844 the event occurred that people often learn about in history if they learn anything at all about this man. The United States Post Office had a monopoly on postage. As such they were charging a VERY HIGH postal rate.

Lysander opened the American Letter Company which offered far better rates than the USPS. In fact, the USPS finally had to lower its own rates to compete with Lysander's business. His business was actually quite good at what it did though it would eventually be made insolvent by the legal challenges that the government kept sending his way. Then in 1851 the government enacted a law which strengthened the government monopoly and put him out of business.

Lysander was a very active, and outspoken abolitionist. He published a book in 1845 with the title The Unconstitutionality of Slavery.

Although he recognized that the Founding Fathers had probably not intended to outlaw slavery when writing the Constitution, Spooner argued that only the meaning of the text, not the private intentions of its writers, was enforceable. Frederick Douglass, originally a Garrisonian disunionist, later came to accept the pro-Constitution position and cited Spooner's arguments to explain his change of mind.

Lysander Spooner actively campaigned against slavery from 1845-1861. He published pamphlets on Jury Nullification and other legal defenses. These would be used by escaped slaves whom he would often offer his legal services to free of charge.

Although he had advocated the use of violence to abolish slavery, Spooner denounced the Republicans' use of violence to prevent the Southern states from seceding during the American Civil War. He published several letters and pamphlets about the war, arguing that the Republican objective was not to eradicate slavery, but rather to preserve the Union by force. He blamed the bloodshed on Republican political leaders such as Secretary of State William H. Seward and Senator Charles Sumner, who often criticized slavery yet would not attack it on a constitutional basis, and who pursued military policies seen[by whom?] as vengeful and abusive.

Lysander influenced a lot of people and someone could likely make a pretty cool documentary or movie about this man. It would be serious at times, crazy funny at others, and ultimately a clash of mind versus government.

I am going to link to a lot of his works as provided by the Mises Institute(Some via Wikipedia). I will point out the ones I personally thought were worthy reads even today. I haven't read them all. They likely are all worthy in their own way.

I will also share a bunch of quotes in MEME type form at the end. I am not going to cite where all the images come from as they are all simply people slapping his photo with a quote he said or something along those lines. I could do that too but since it is not their own original work why spend time doing what others have already done. I will not be stealing their work.

I find those two particularly interesting having not read them yet. Wikipedia refers to him as a Unitarian. Yet here are his two earliest works and they are from the perspective of a Deist like Lysander's father and myself.

That one I suspect would be some food for thought for many of you thinkers out there.

I haven't read that one yet. I intend to though as I want to see what Lysander's thoughts were on the topic that so controls much of our society today.

I wonder if they talk about Lysander Spooner much during Black History Month since he wasn't black but he fought hard for their freedom even before the Civil War.

Personally I think No Treason is Lysander Spooner's most profound work. I revisit it occasionally. I have linked to the texts above. I know there are some audio versions of this and I want to make them available here. If you are a thinker this is some deep thinking.

Download from Mises Institute - No Treason: The Constitution of No Authority 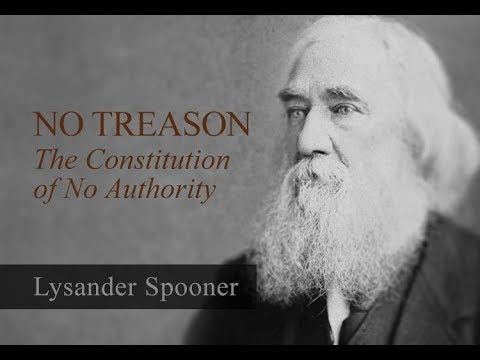 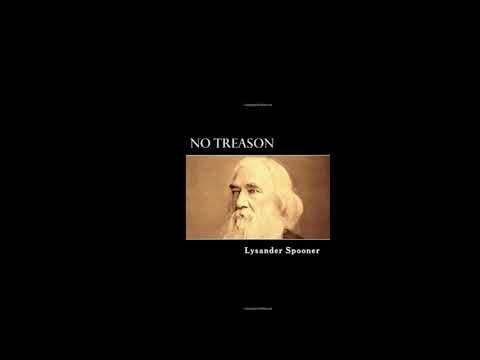 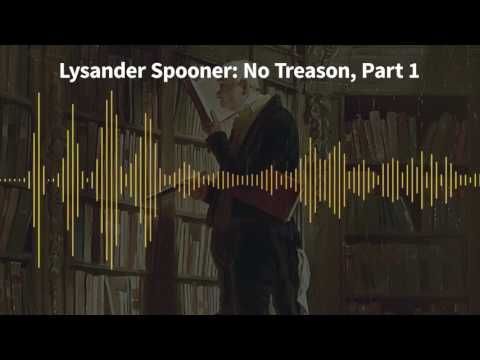 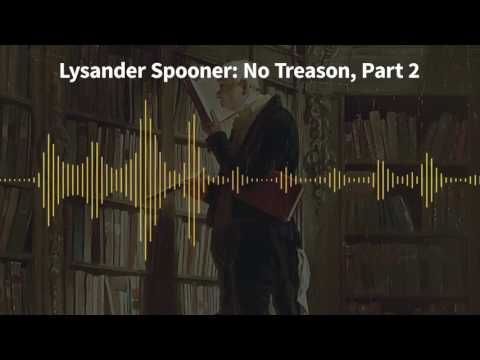 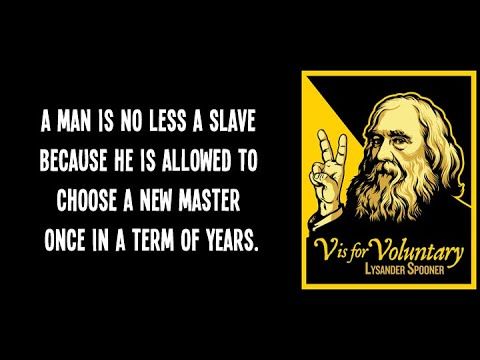 I may have gone overboard with the links yet since they are all on youtube there is no clue how long they will stay around. Now to continue on his works...

I only touched on this one and forgot to revisit it. It has just moved onto my short list for planned readings. 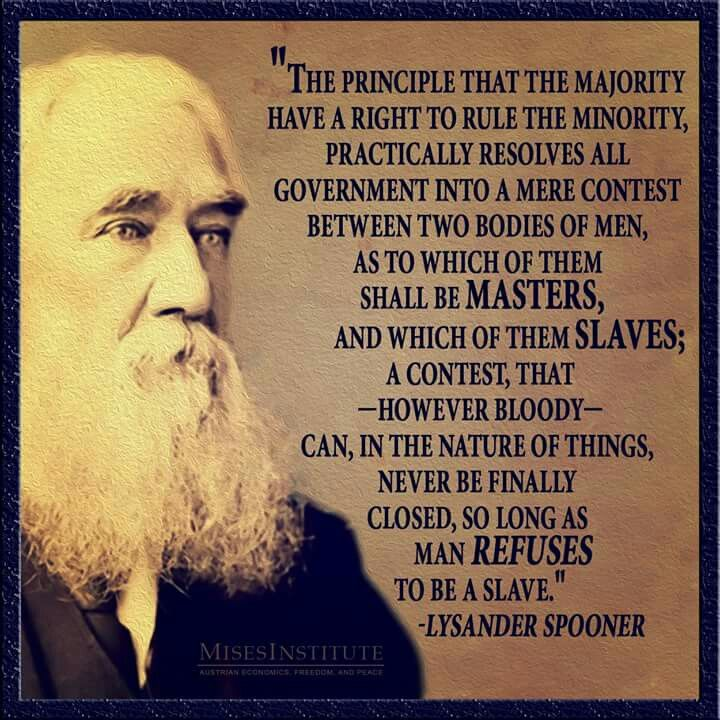 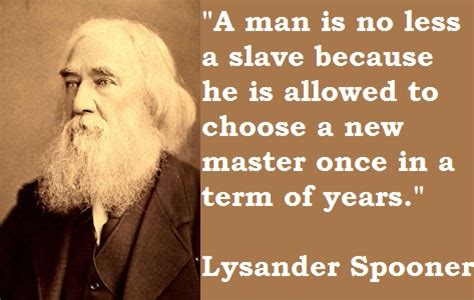 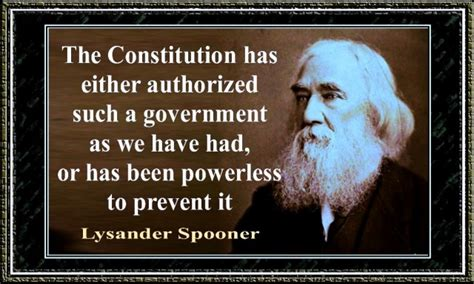 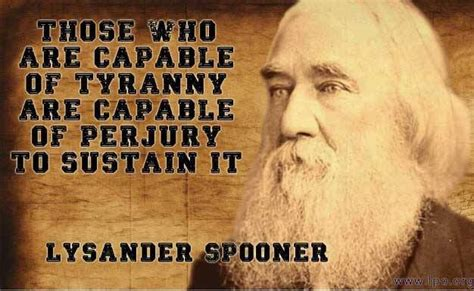 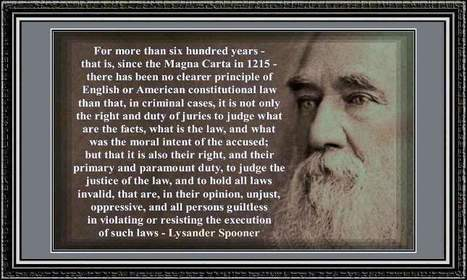 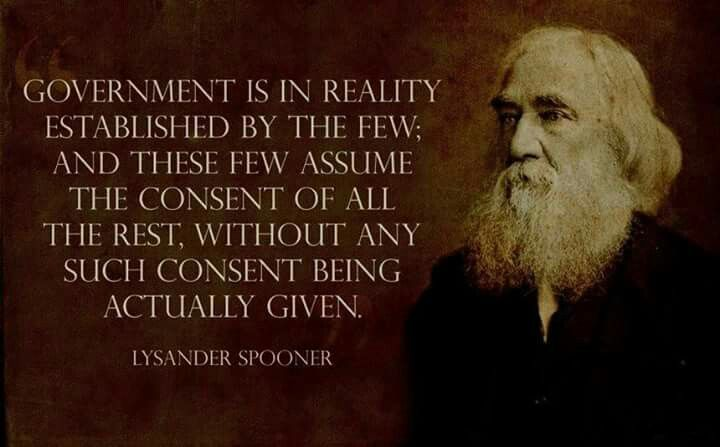 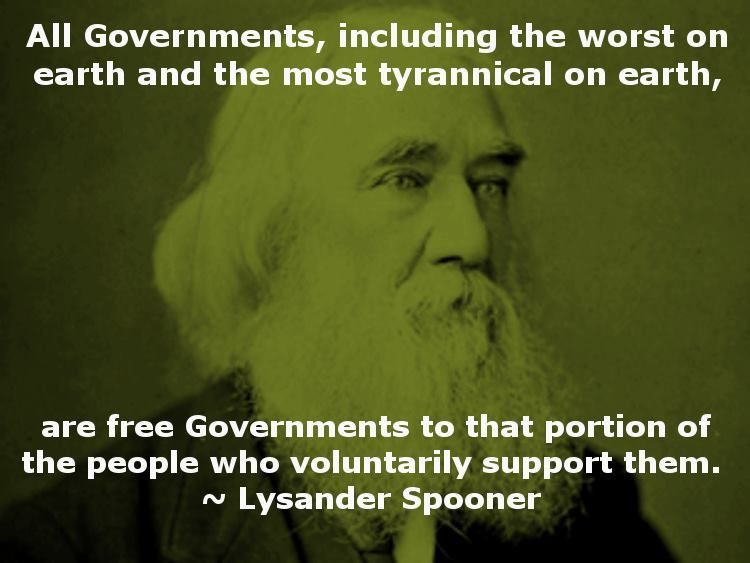 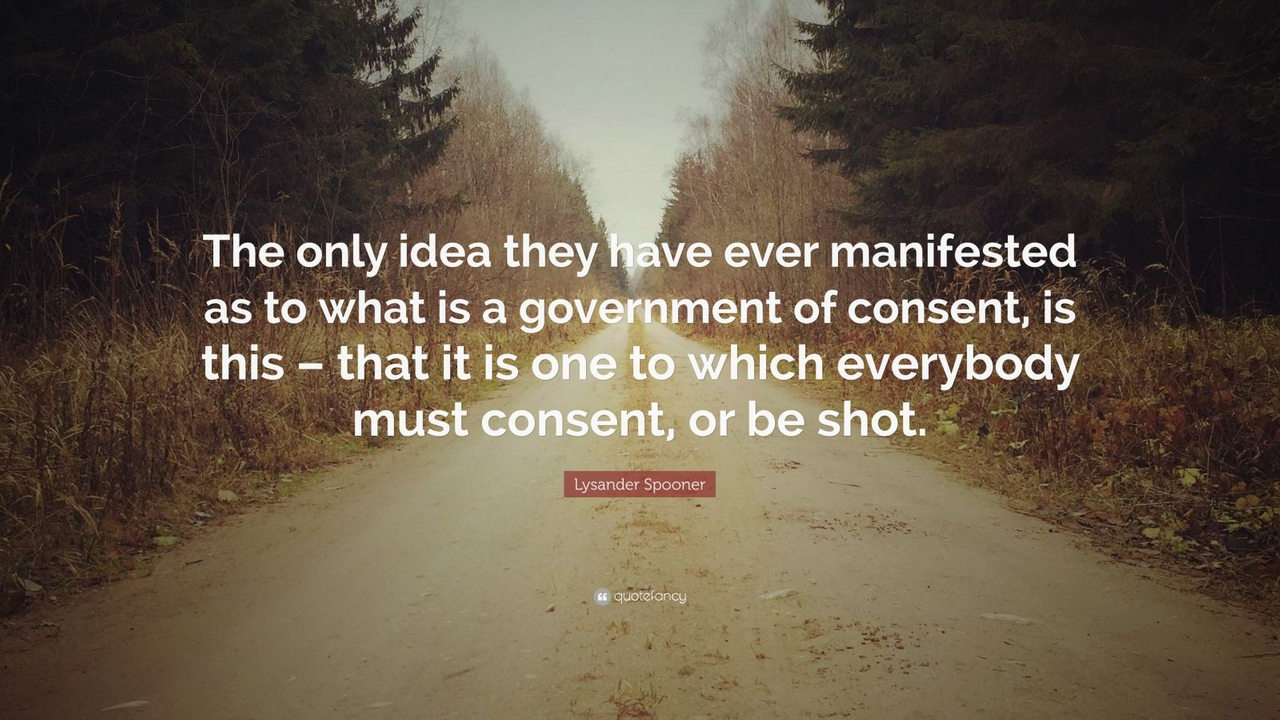 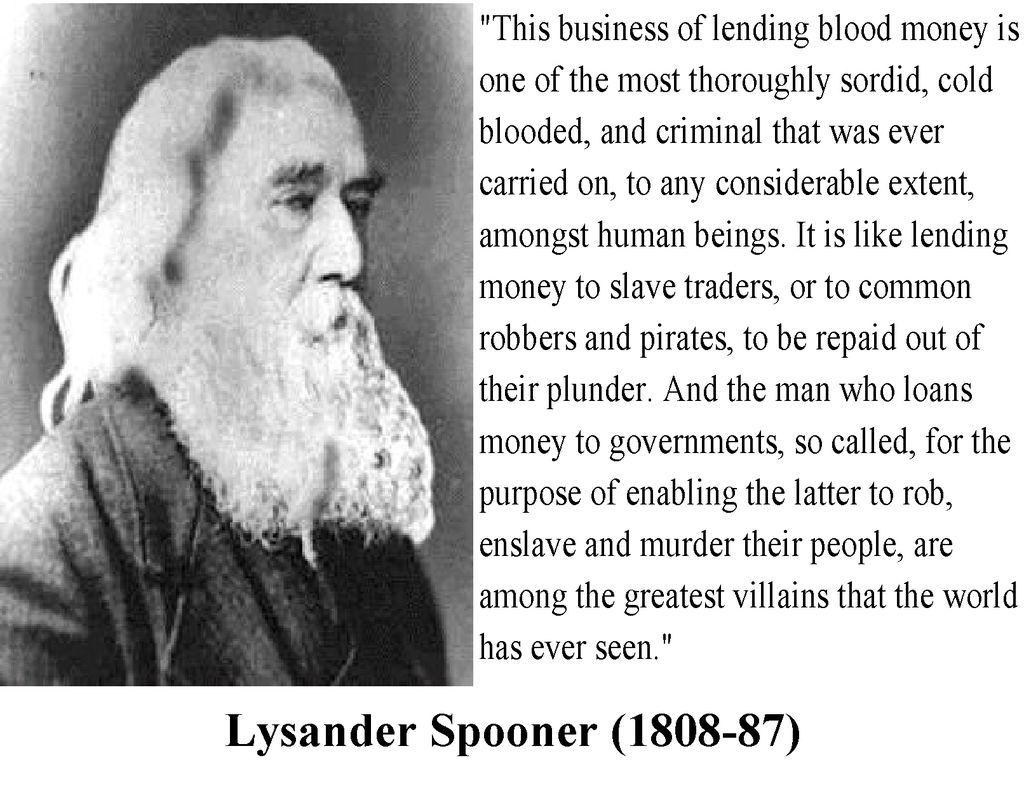 When I think of #deepdives this is the type of post I imagine. This is why I don't publish as often to this community. If I am going to do so then it needs to go deep. Hopefully those of you that agree with me on this find this post worthy of the tag.