Nigeria is probably one of the most diverse countries in the world with over 250 ethnic groups and 500 languages. However, only 3 major tribes are popular - Hausa, Igbo, and Yoruba. The Hausas generally refers to the people in the northern parts of the country, the Yorubas refer to those in the Southwestern part, while the Igbos refer to those in the south and the southeastern parts.

Each tribe has foods that are peculiar to them, although, boredom in tastes and monotony of foods make people go intertribal when it comes to food. I, a Yoruba person, for example, believe that Yoruba foods are quite boring with low creativity. Hence, once in a while, I try out foods from other tribes, particularly, the Igbo tribe.

The Igbos are known for their soups. It is believed that they do not have a lot of food varieties but when it comes to different leaves and creativeness in utilizing them to make different soups, no tribe can be comparable to them. Hence, you can find the Igbos eating a particular food (grains or swallow) type repeatedly for a long time without getting bored of feeling monotonous because they eat them with different rich soups.

Today, I decided to try out one of the most popular soups among the Igbo tribe. The soup is known locally as "ogbono". The base ingredient in this soup is dried and ground seeds of Irvingia gabonensis. Irvingia gabonensis grows as a huge three up to 50 m in height, grows well in the southern part of Nigeria, flowers, and fruits at different periods of the year depending on the climate. The fruits are usually allowed to mature and fall off the tree before they are picked up and cracked open in order to extract the seeds. The seeds are then allowed to dry before they are taken and sold in the market.

Apart from the seeds that are utilized in cooking ogbono soup, many people are fond of eating the ripe fruits of Irvingia. The tree also forms timbers whose woods are utilized for different construction purposes. Medicinally, various parts of the plant are used for different ailments. 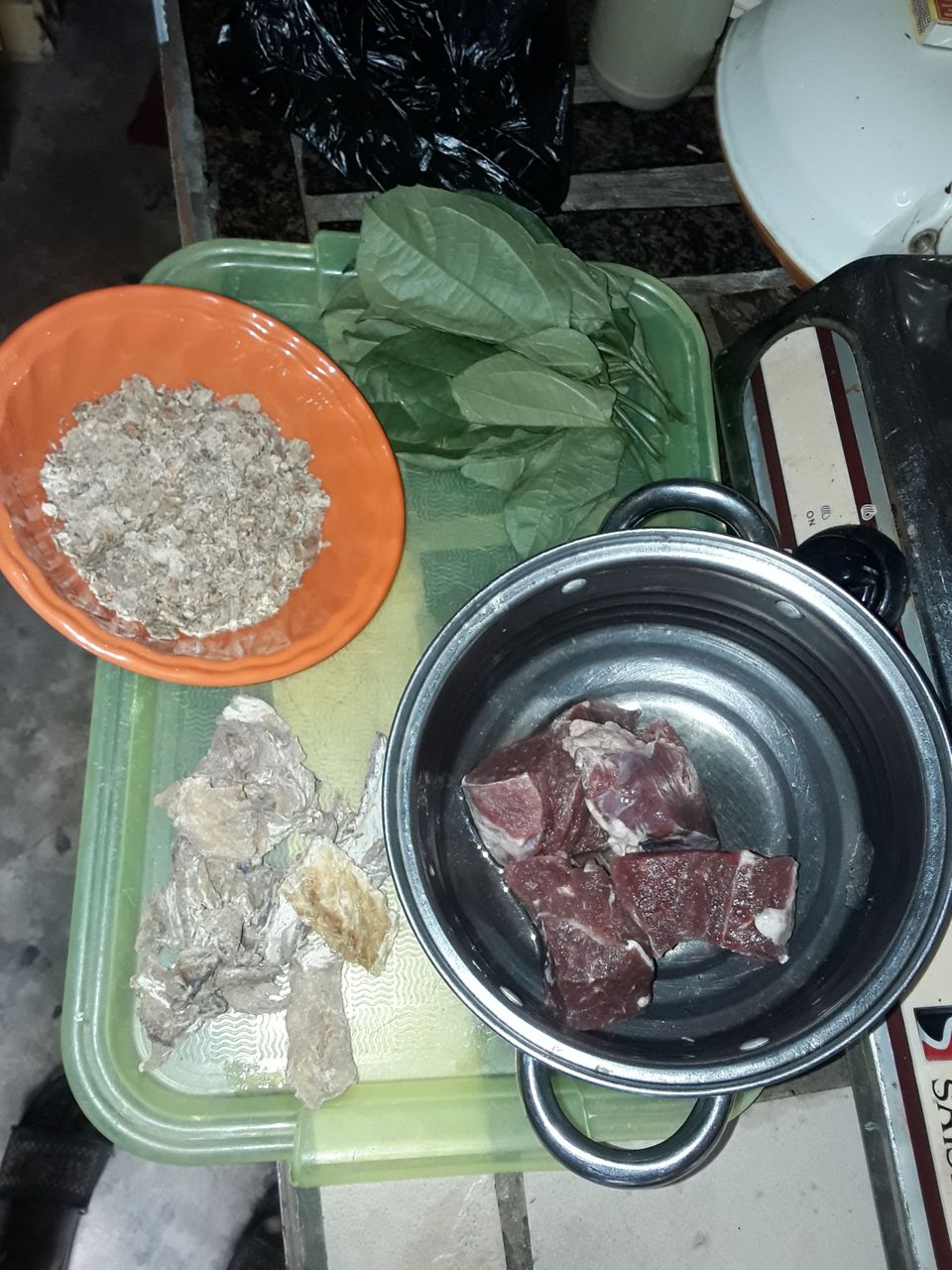 The various ingredients for the preparation of ogbono soup

Some people prefer to use leaves from different vegetables such as Vernonia amygdalina (bitter leaf), uziza, utazi, or a combination of the leaves. Some also prefer to use offals instead of beef. 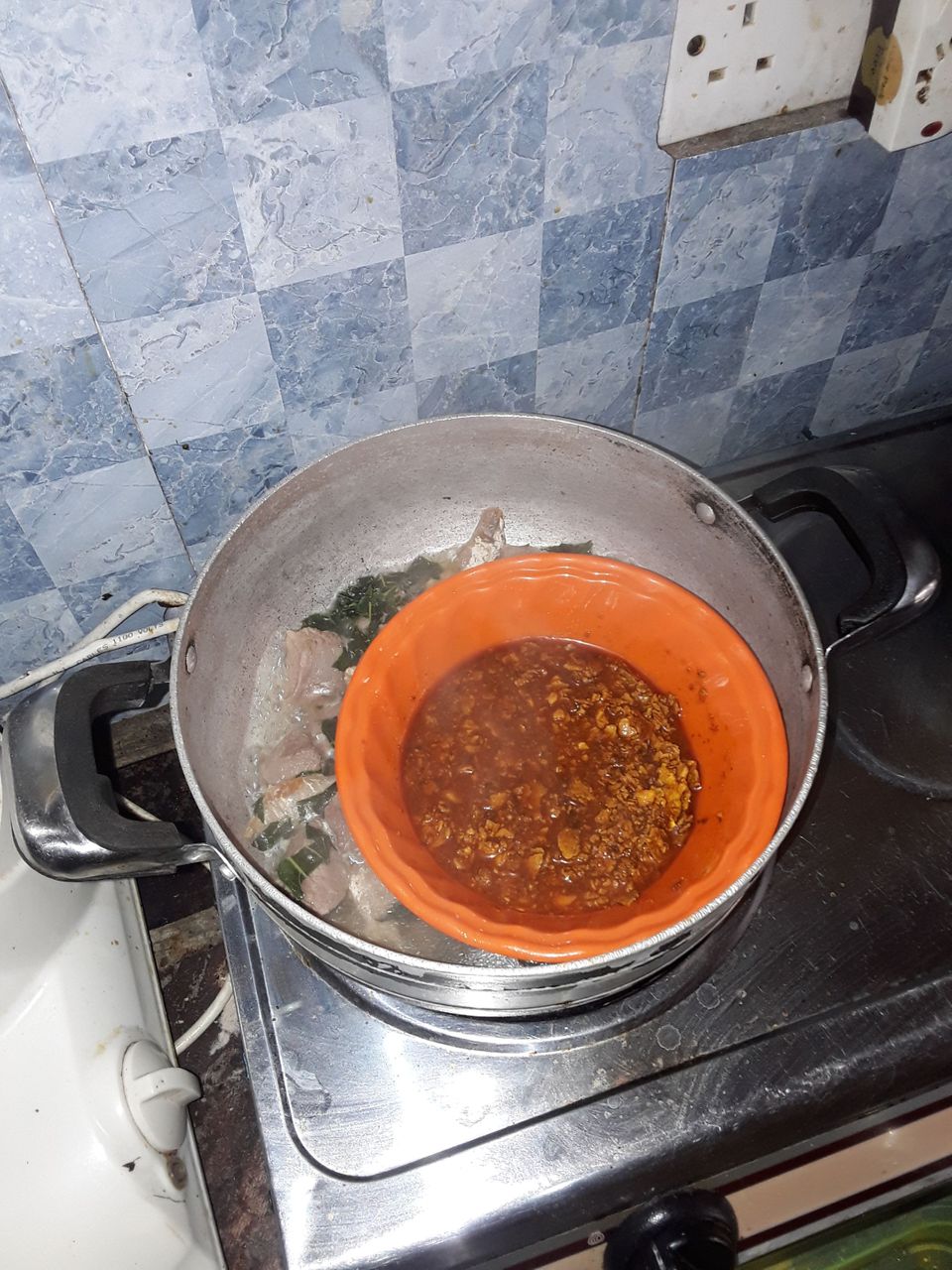 Boiling the beef, stockfish, and a bowl containing powdered ogbono in palm oil 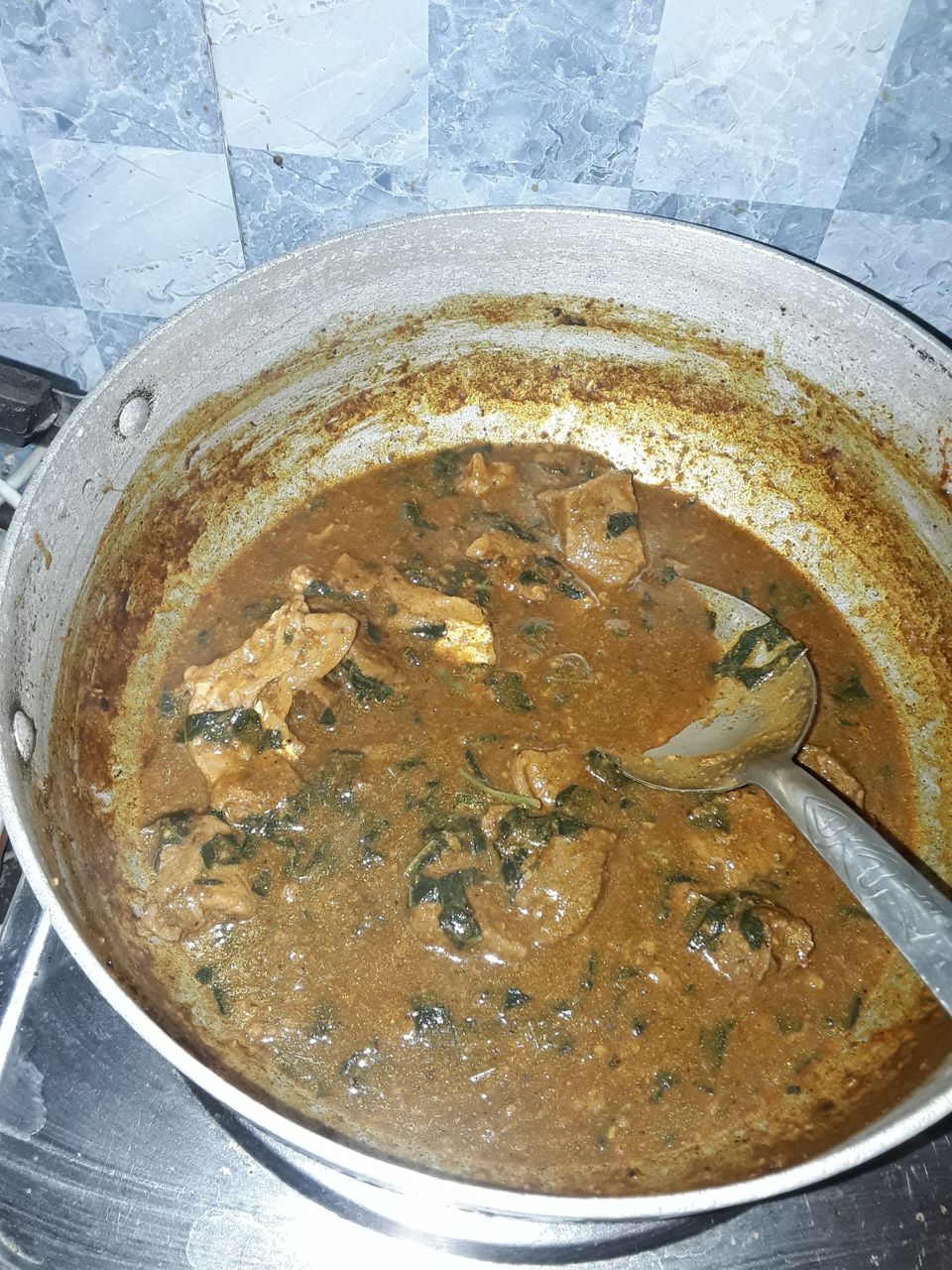 Ogbono is a soup that is mostly used to eat swallow foods. The swallow foods that are often eaten with ogbono include eba (also known as gàárì), semo, pounded yam, and amala. In my own case, the ogbono I made went with amala. 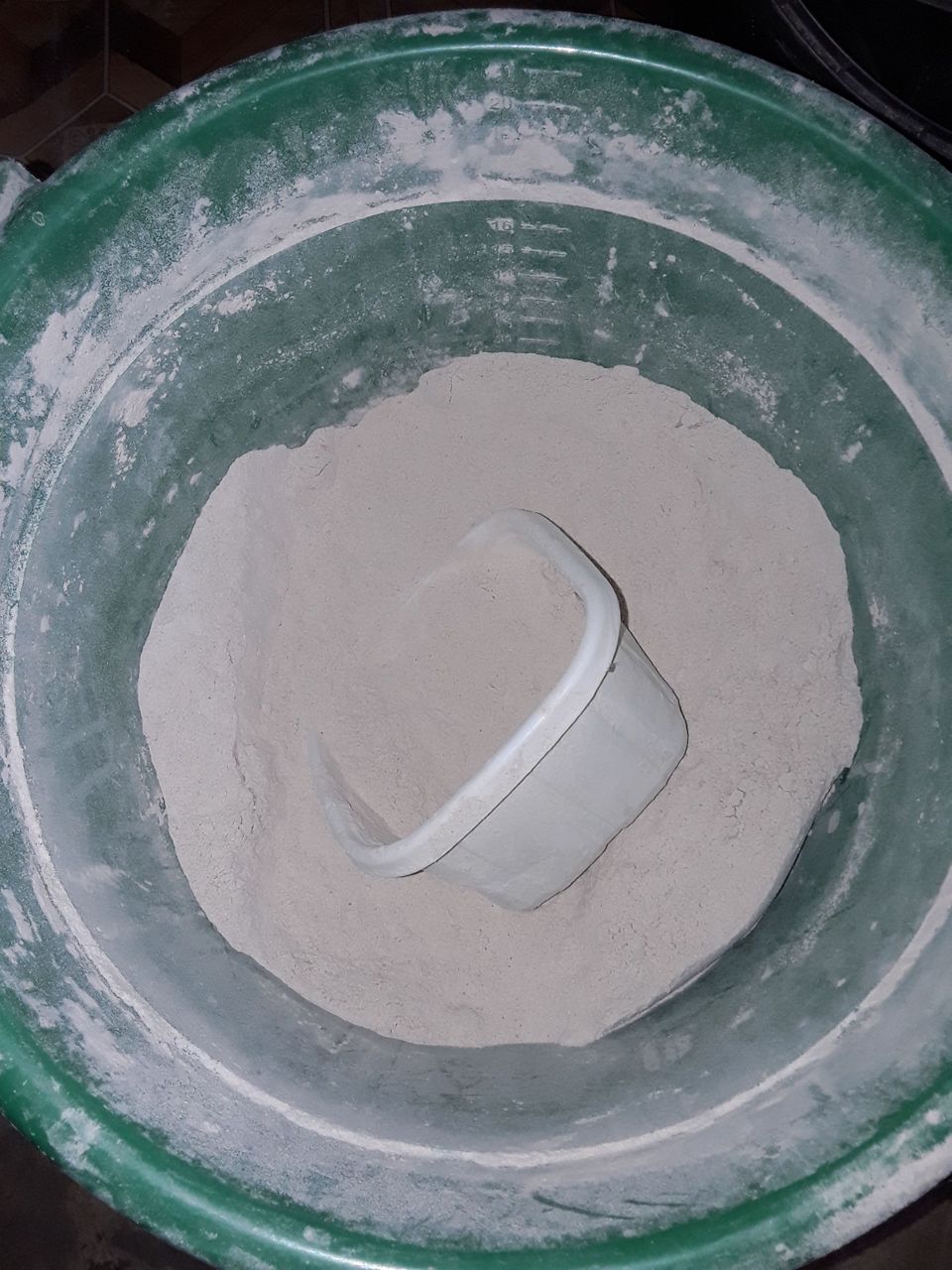 The yam flower from where amala is produced

Àmàlà is a food derived from yam flour. A measured quantity of yaw flour is poured into a commensurate quantity of boiling water in a pot and a pallete is used to stir continuously until a thick, semi-solid substance known as amala is obtained. You can read more on the preparation of amala here. 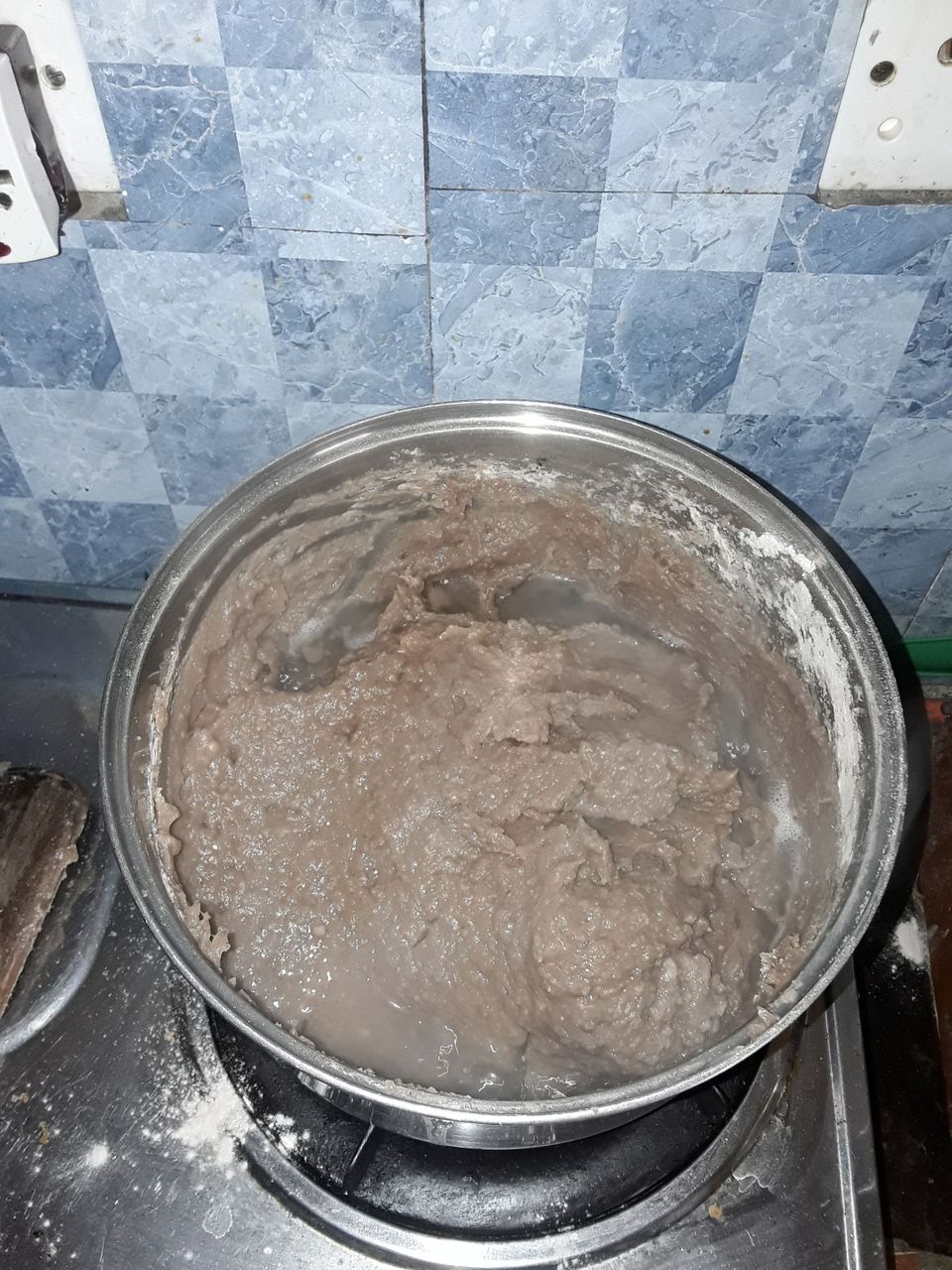 The amala in the making process

The nutritional content of ogbono soup would vary depending on the ingredients used in preparing it. However, the ogbono seed itself has several basal nutritional contents that play an essential role in the body of its consumers. Some people actually consider the seeds as nuts and consequently eat them without any processing.

A couple of research has been done on the proximate and nutritional analysis of ogbono seeds and while some antinutrients were discovered, they were quite minute. Nutrients such as sodium, potassium, calcium, magnesium, zinc, and phosphorus were found in abundance in addition to several other nutrients. 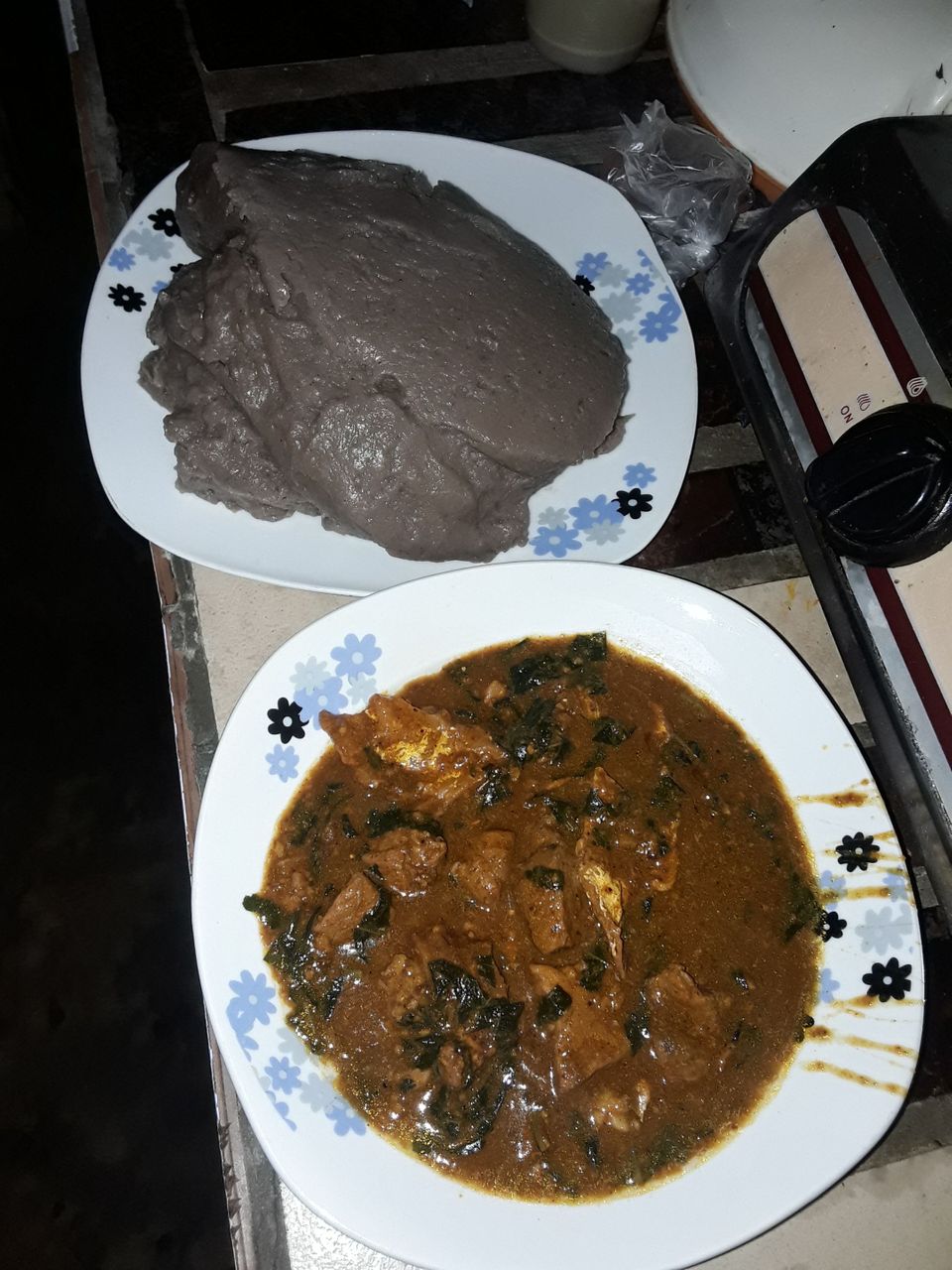 Food is ready. That's for the entire household

All images used were taken by me