fotostef70
a year ago
inNatural Medicine

Homesteading is practically a lifestyle that leads to self sufficiency. A few months ago, I wasn't familiar with the term although I was very familiar with the practice. Homesteading was the lifestyle of the majority of the people in Greece until the end of World War II, when a large immigration wave started towards either the cities or abroad. Almost 2/3 of a century later a lot of people (including me) are making the choice to turn their backs to urban life and seek a different way of living but the knowledge of self sufficiency has faded away. A few fragments of it can be found in the memories of the elders while tradition has preserve some others. My intention is to find and document what is left from the traditional practices, in the modern world. I'll begin with something that is not essential for survival but it is very important for the social life of the region and has been source of comfort for the population during a lot of stressful eras in the past.
Raki is an alcoholic drink produced by distillation of grape pomace. The word is Turkish, originated from the Arabic "arak" and variations of the same drink are popular all over the Balkans, Turkey and Iran, although each region has its own "recipe". I'll describe the way it is done in Crete, where I live. The first material is, of course, grapes which are squeezed by feet inside a built container. Most of the juice goes for wine-making (that's another post) while the rest along with the stems and the skins are kept into barrels for, at least, two months for brewing.
The distillation is done in wood fired copper alembics, usually on a field where there is a built base and a rough shelter (in case of rain). Since it takes all day long or many days, depending on the quantity of the stems and the capacity of the alembic, it is a great excuse for people to come over and have a small fiesta with plenty of food and fresh "raki". 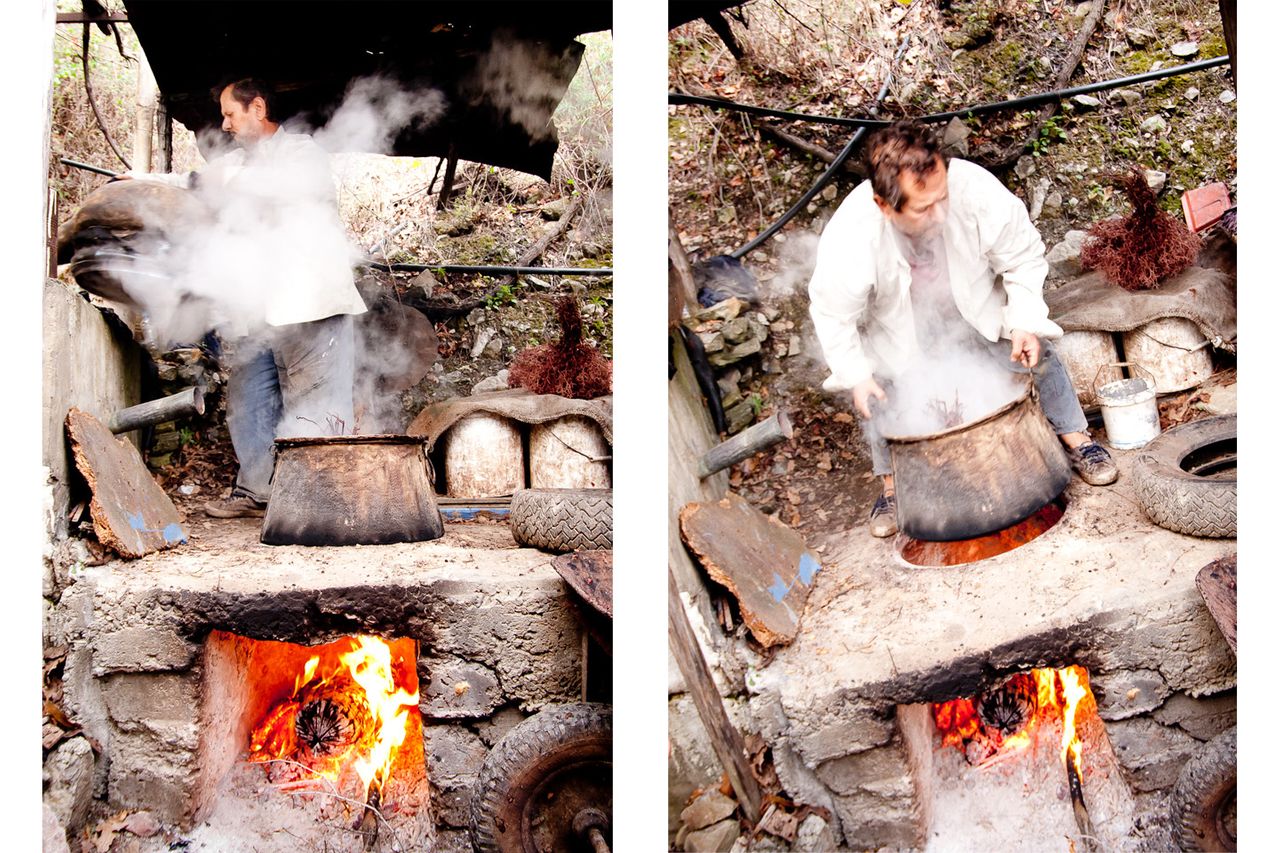 And removing from the fire. Emptying and cleaning the pot. Putting a bush in the bottom to avoid any sticking. And filling up for the next round. Putting everything back in place and we are good to go! The percentage of alcohol has to be monitored since in the beginning it is extremely high and inappropriate for consuming and at the end you have to stop the distillation before it gets too watery. I imagine that before alcohol-meters this part was done by experience or by tasting :) And of course all the leftovers will go to the vegetable garden after cooling off!

I wrote that 2 years ago and I am re-posting it with the #showcasesunday post, an initiative of @nonameslefttouse meant to revive old posts!

All the pictures and the words are mine.

Thank you for reading and if you want to know more about me you can check out my introduction post.