amy-goodrich72
a year ago
inNatural Medicine Heya gorgeous hive people. Yes, I am still alive and kicking, though way too busy. Ever since corona started one year ago our little popup bakery has been running like a train. Though I am feeling super blessed that in times like this business is running well, I miss being on hive and would love to catch up with all of you.

Though you might not have seen any recipes appearing over 2 months, I am still blending, juicing, steaming, cooking, and baking every day. Believe it or not, I have tons of recipes ready to post. I don’t even know where to start.

I just opened my little kitchen notebook and this was the first recipe that popped up…. So I guess this is the one we'll start with, right?

Though I can’t promise anything, I will do my utmost to post at least once a week and I will try again to get hive going on my phone so that whenever I have a few minutes I can start catching up with all of you.

However, the last time I tried to get hive on my phone I almost ended up smashing it out of pure frustration after multiple failed attempts to enter my password... And as you know they are not the easiest and the nicest to enter a few times.

Ohh wait, you want to see the cutest thing… these little furry bundles hatched just a week ago…. Cute hey…. Baby geese. We love geese…. They keep the garden snake-free, and they in their turn can be absolutely sure we don’t going to eat them. Happy plant-based munchers… happy geese! Plus they have 4 hectares of tropical bliss to call their own. For the falafel balls FYI: I made my own breadcrumbs by roasting a slice of wholemeal bread from my bakery

FYI: I made this recipe for 2 people but ended up with too many falafel balls, I froze them and they came out great after. I used them to make a buddha bowl.

For the celery sauce For the red beet puree

For the falafel balls

Make a chia egg by adding 1 tbsp chia seeds to 3 tbsps water. Stir and let sit for a few minutes.

In a pan, saute onion for a few minutes, add garlic and cook until fragrant. Add all ingredients to a blender and mix well. Do not over-blend as you want to keep some texture in the mixture. For better consistency, let the mixture rest in the fridge for 30 minutes. Then roll into small balls. If you don’t have time, I have skipped the fridge step before and they came out yummy too. 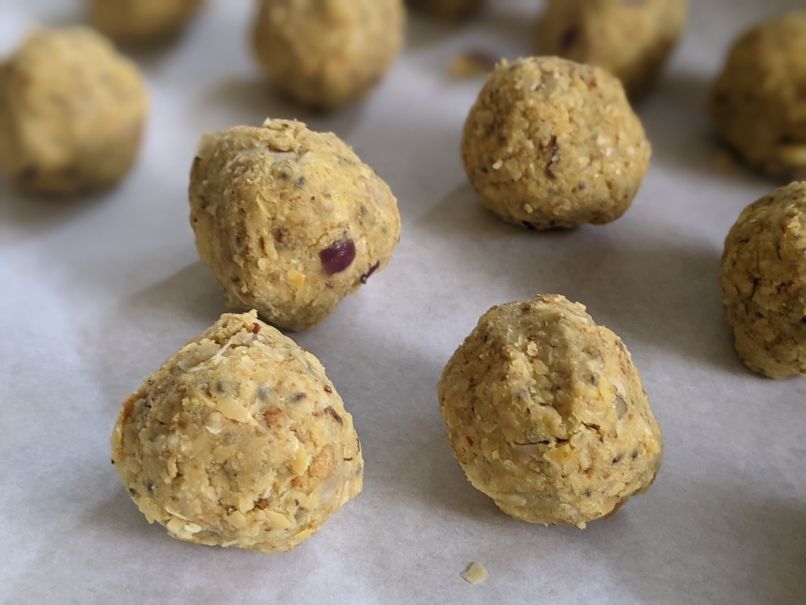 Preheat oven to 200C (400F). Line a baking sheet with baking paper and bake the falafel balls in the oven until golden, flipping halfway through. For the red beet puree

You can make the red beet puree while the falafel is in the oven. You can either roast the red beet or cook them in boiling water with the potatoes.

When soft, mash and add a splash of plant-based milk, nutmeg, Himalayan pink salt, and black pepper to taste.

I was so busy in the kitchen that it seems I forgot to take pics of the red beet puree.... ooops.

While the falafel is baking and the potatoes boiling, start making the sauce.

In a pan, saute onion until translucent. Then add celery, bay leaf, thyme, and rosemary. Cook for 10 minutes or until soft, stirring regularly. When soft, add 1 cup of white wine. Cook until reduced by half before adding the coconut or cashew milk. Cook until thickened. This shouldn’t take too long. When the desired consistency, add the falafel balls. Gently stir until heated. Even Ryuk was interested.... Didn't take too long though. She's not quite the plant-based muncher we are! WISHING YOU ALL A HAPPY AND HEALTHY DAY ღ ღ ღ

HOW TO MAKE COFFEE KOMBUCHA