Continuation - Travel in Russia. Republic of Dagestan - the cities of Makhachkala and Derbent We look directly from Space to the Earth below.
Below us is the Republic of Dagestan.
We arrive in Makhachkala. We also see the city of Makhachkala below from the plane.
We fly over the green and bourise Caspian Sea.
Such a fantastic beauty. And so we landed at the airport of the city of Makhachkala.
Welcome to the Republic of Dagestan, Russia.
It is the gateway for tourists and travelers. We leave the airport for the city of Makhachkala.
Rest and adventure await us ahead.
A lot of interesting. We settled down to stay at this hotel called Metropol.
I think it will be comfortable to live here.
And so it turned out. The central square of the city of Makhachkala with a monument.
The leader of the world proletariat, Lenin, is still standing.
All buildings here are administrative. The next day we went on an excursion to the ancient city of Derbent.
Everything was much more interesting here.
The history of the city and the fortress. 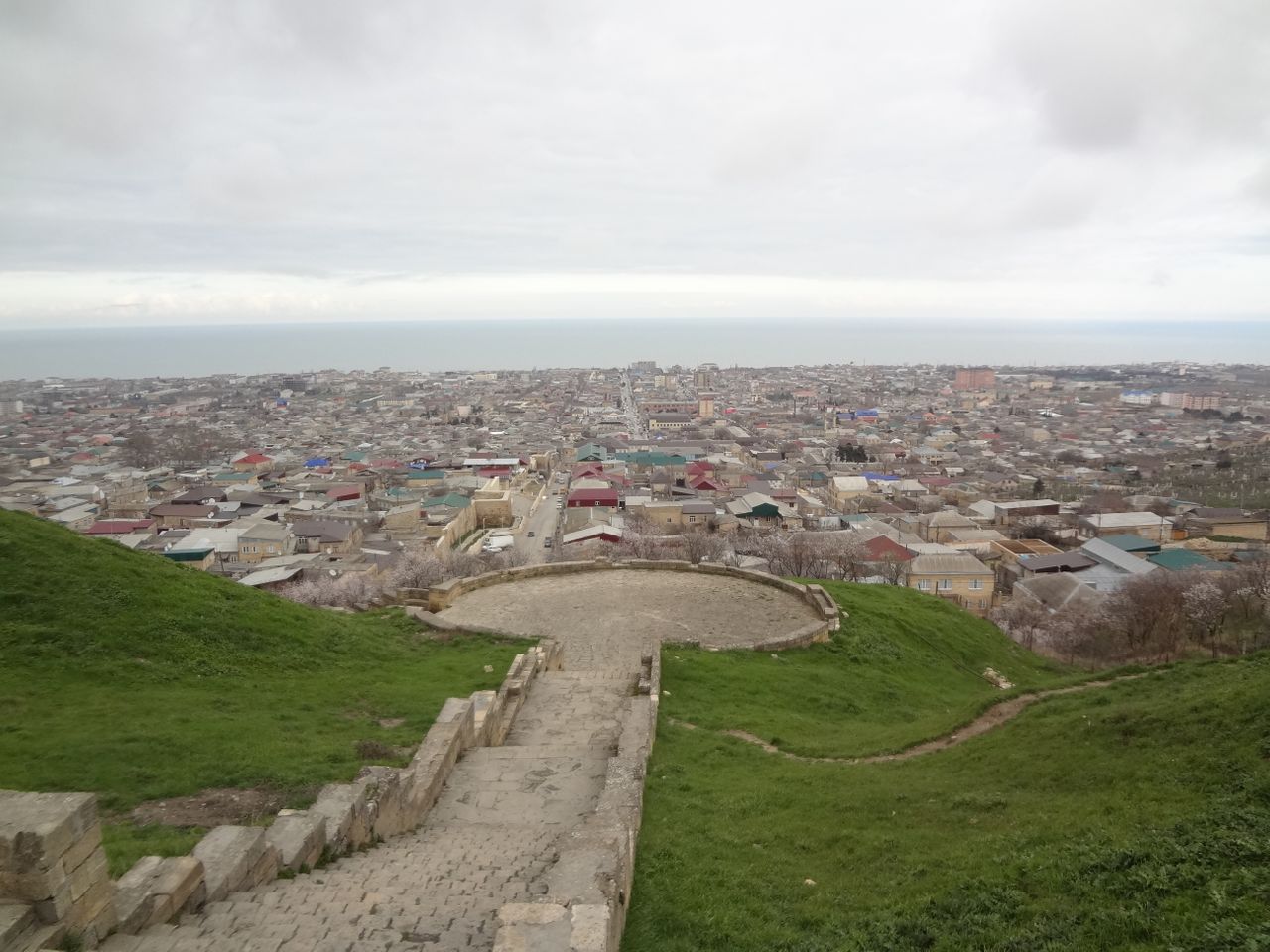 View from the fortress to the city of Derbent and the Caspian Sea.
It is a pity that the weather was not only sunny.
But for photography, this is good. These are the big walls of the fortress in front of us.
You immediately feel so small next to me.
The huge stones are very clearly visible. Such impenetrable and high walls of the fortress.
It was difficult to conquer such a fortress.
Or completely impossible. You can go down to the city of Derbent by using such a staircase.
There are a lot of steps, it is difficult to count them.
But people still walk. How could all this be built in those distant times?
Even today you look and do not understand.
What a work of people. There are also such quiet and cozy places in the fortress.
You can come and sit in silence to relax.
Beauty is in everything. A part of the fortress wall, where anyone can climb.
Above, there is a beautiful view of the city and the sea.
People love to be photographed here. This is my sixth book in a series about the revival of the Great Silk Road, international trade and an alternative currency that I have proposed for commodity exchange operations. The project is developing for the territory of the Republic of Dagestan, which over time will change the very concept of economic development in the Caucasus region and Russia. The book is intended for a wide range of readers of the countries participating in the project of the GSP Program: Russia, Dagestan, China, Kazakhstan, Pakistan, Afghanistan, Uzbekistan, Kyrgyzstan, Tajikistan and Belarus.
Format - 148 mm x 210 mm.
Volume - 500 pages TRAVEL IN RUSSIA. REPUBLIC OF DAGESTAN - CITIES MAKHACHKALA AND DERBENT.(Continuation)

The capital of the Republic of Dagestan. The city is located on the western coast of the Caspian Sea, near the foothills of the Greater Caucasus. The area of ​​the city is 468 sq. km. The population is 590 thousand people. The city was founded in 1844 as the Russian military fortification Petrovskoe, named in memory of the stay of Peter I in these places during the Persian campaign.

In 1857, the settlement at the fortress was transformed into the port city of Port-Petrovsk. In 1921 it became the capital of the Dagestan Autonomous Soviet Socialist Republic and was renamed Makhachkala, in honor of the Dagestani revolutionary Makhach Dakhadaev. Today Makhachkala is the capital of the Republic of Dagestan, a large administrative, economic, scientific and cultural center of the North Caucasus.

The name "Dagestan" has been known since the 17th century and means "mountainous country" (from the Turkic dag - mountain, stan - country, land). According to V.V. Barthold the name "Dagestan" appeared only in the X-XVI centuries. Eastern authors called Dagestan Lezgistan. The name "Dagestan" is valid only in a historical sense, since with the inclusion of the Kizlyar plains and the Nogai steppes in the Dagestan ASSR (now the Republic of Dagestan), mountainous regions account for only 56% of its total area.

Derbent is one of the most ancient cities in the world and the most ancient city in Russia. The first settlement of the Kuro-Arak culture, discovered by an archaeological expedition led by Professor A.A.Kudryavtsev, arose here in the Early Bronze Age - at the end of the 4th millennium BC, i.e. five thousand years ago, which is confirmed by the conclusion of the Academy of Sciences of the Russian Federation dated 04.12.2010, signed by the academician-secretary A.P. Derevianko.

The citadel "Naryn-Kala" and the Great Caucasian Wall "Dag-Bary" are one of the three largest fortifications in the world, along with the Great Wall of China and nowadays not preserved Roman Danube fortifications. In terms of the volume of the laid building material, they are seven times larger than one of the seven wonders of the world, the Cheops Pyramid.

Materials from my book about Dagestan.

ADDITIONAL INFORMATION:
-original photo;
-first publication;
-camera Sony 16.2.
Photos posted by me are clickable. They can be viewed in large size by clicking on the photo.
Photos were taken with the size of 2592 x 1944 pixels.
For insertion into a post on Ecency and Hive, the size is reduced to 1280 x 960 points..
Photo taken - Sony 16.2 - 3x Zoom, Vario-Tessar lens.