Polyamorous relationships take very different forms - from type V relationships and triads to complex polycules with many people in complicated relationships. There are superior and secondary relationships, open and closed, kitchen table polyamory and don't ask don't tell rules ... I will try to briefly tell you about all of them, to introduce you to this diversity.

Different types of the relationship by number of people:

Traditional monoamory
I believe it doesn't need any explanation. Relationship of two people, hetero- or homosexual 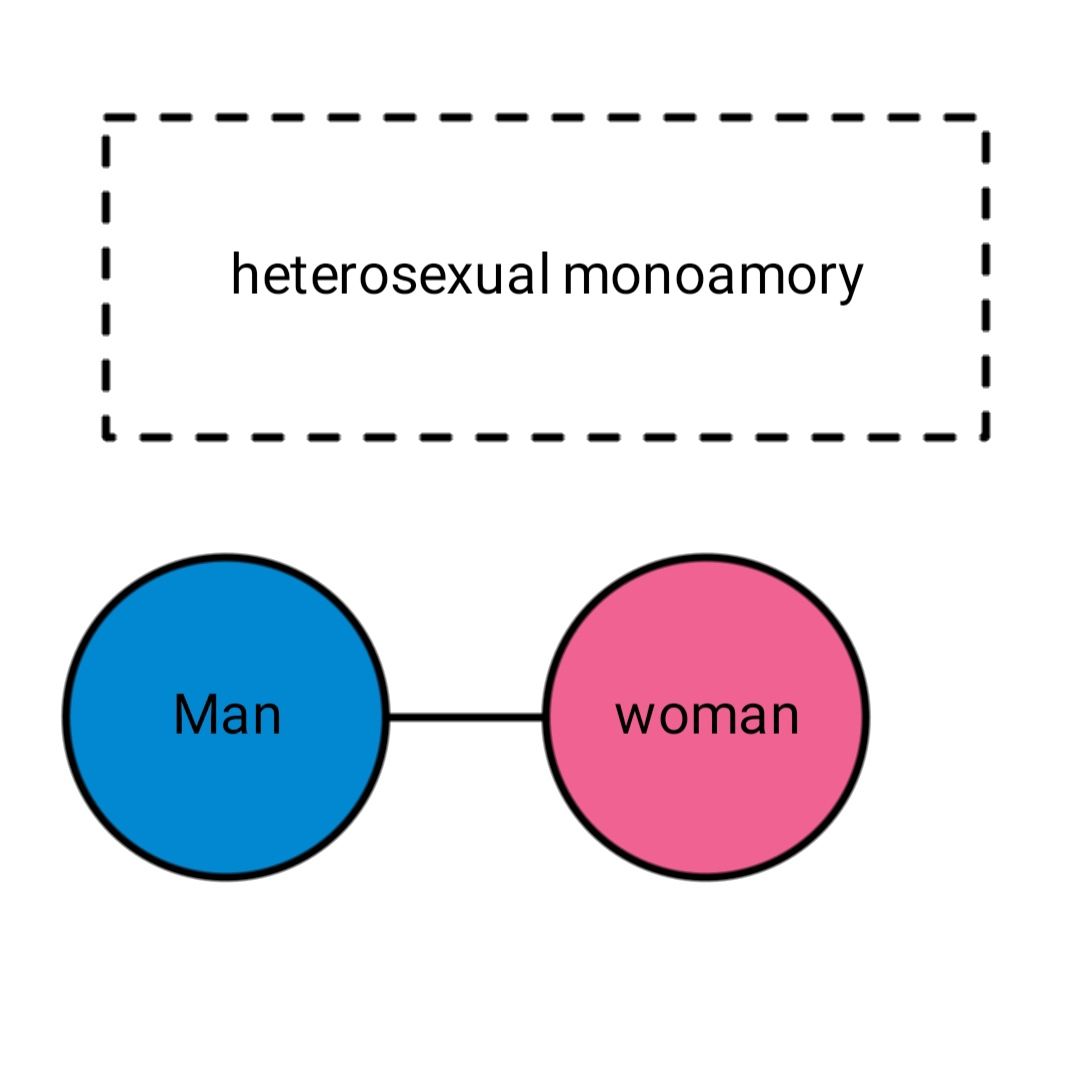 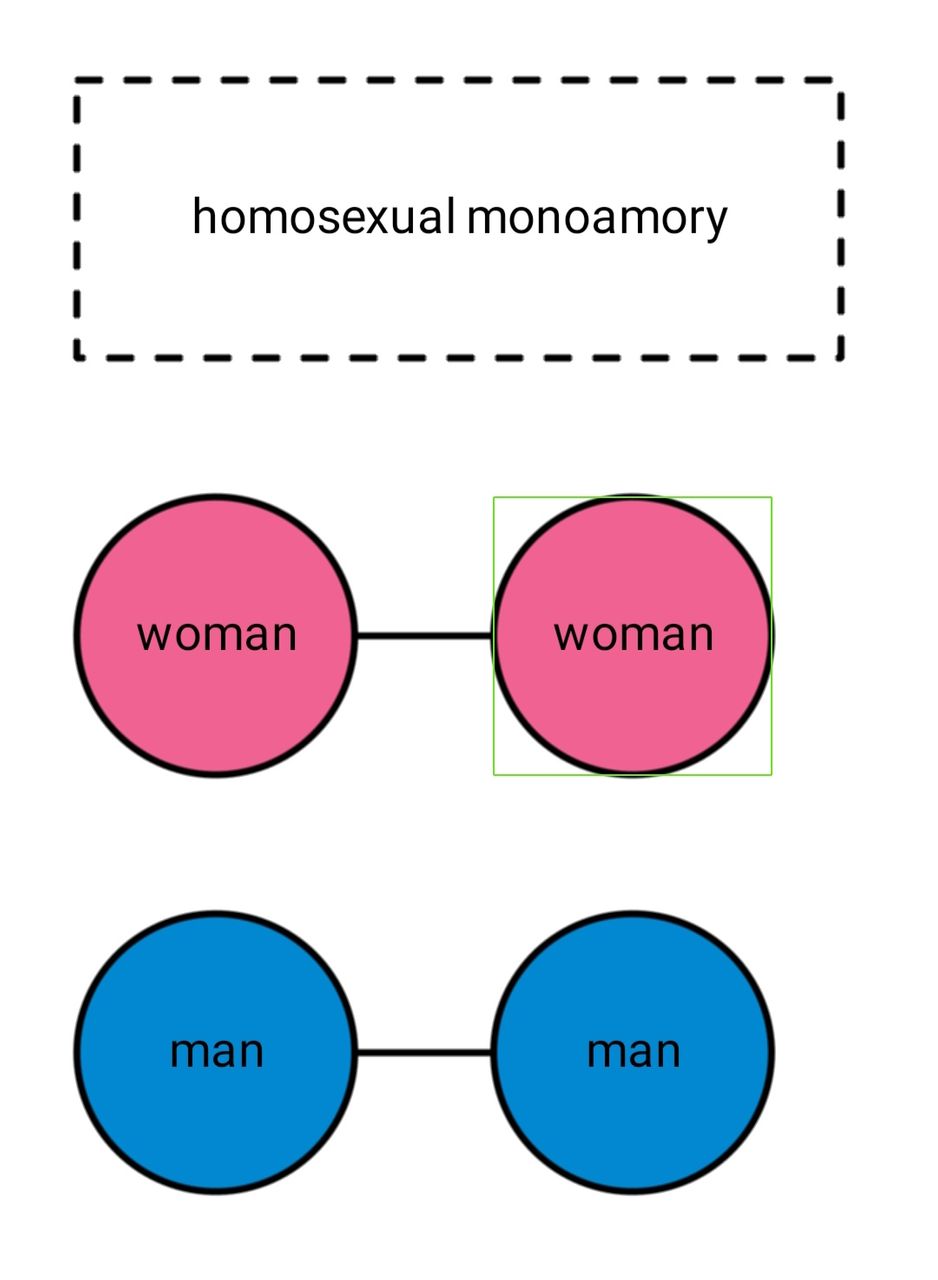 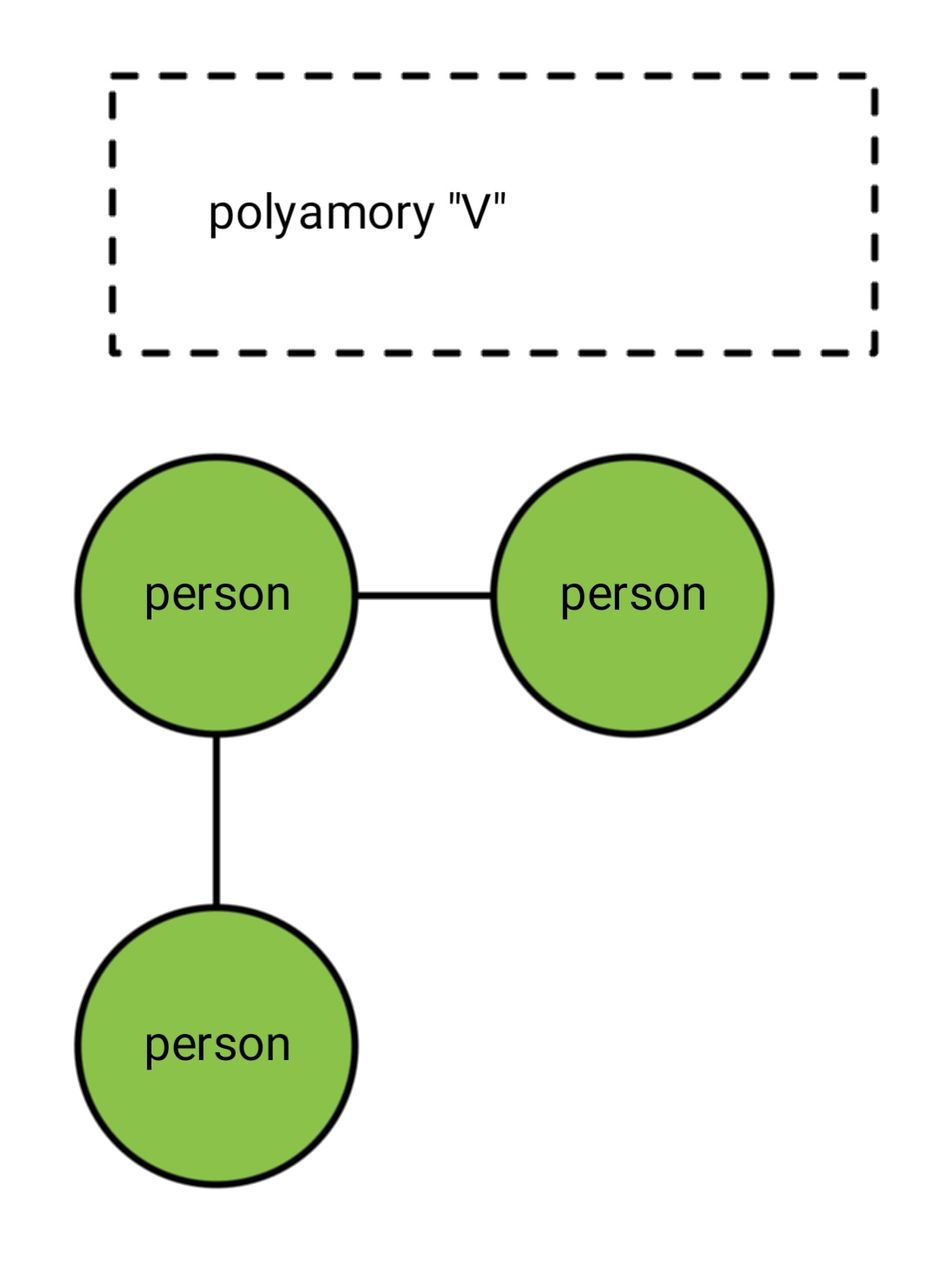 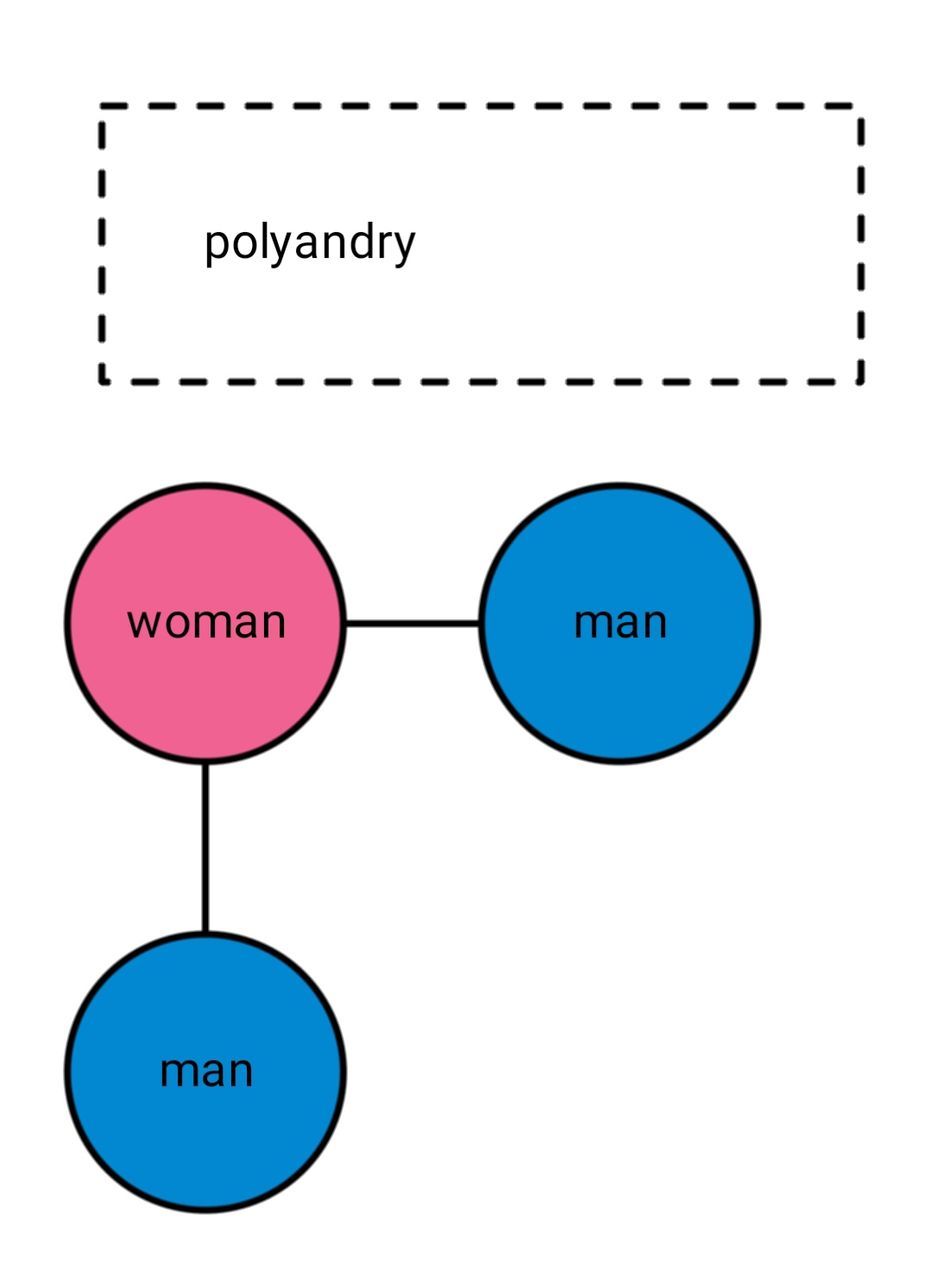 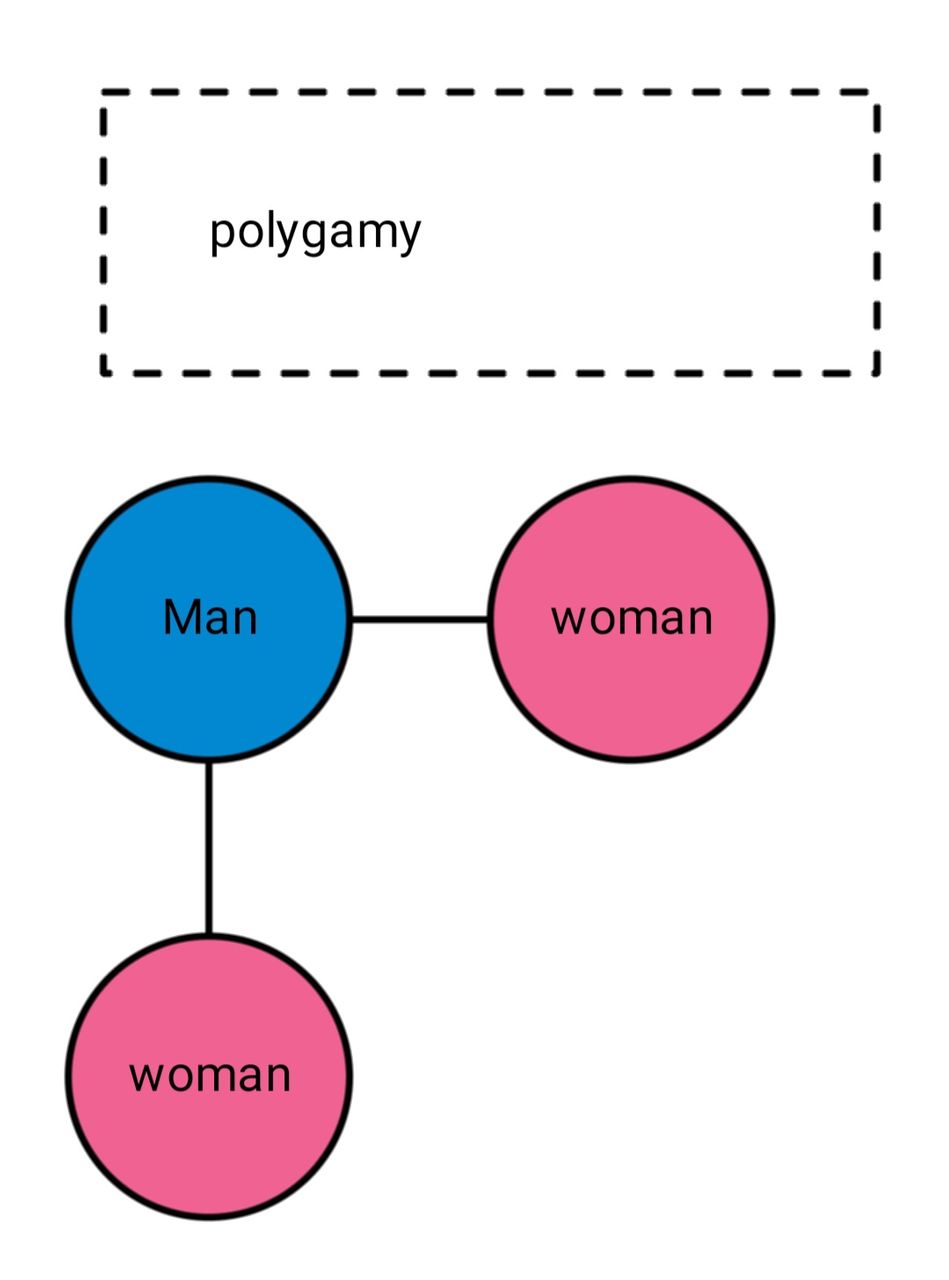 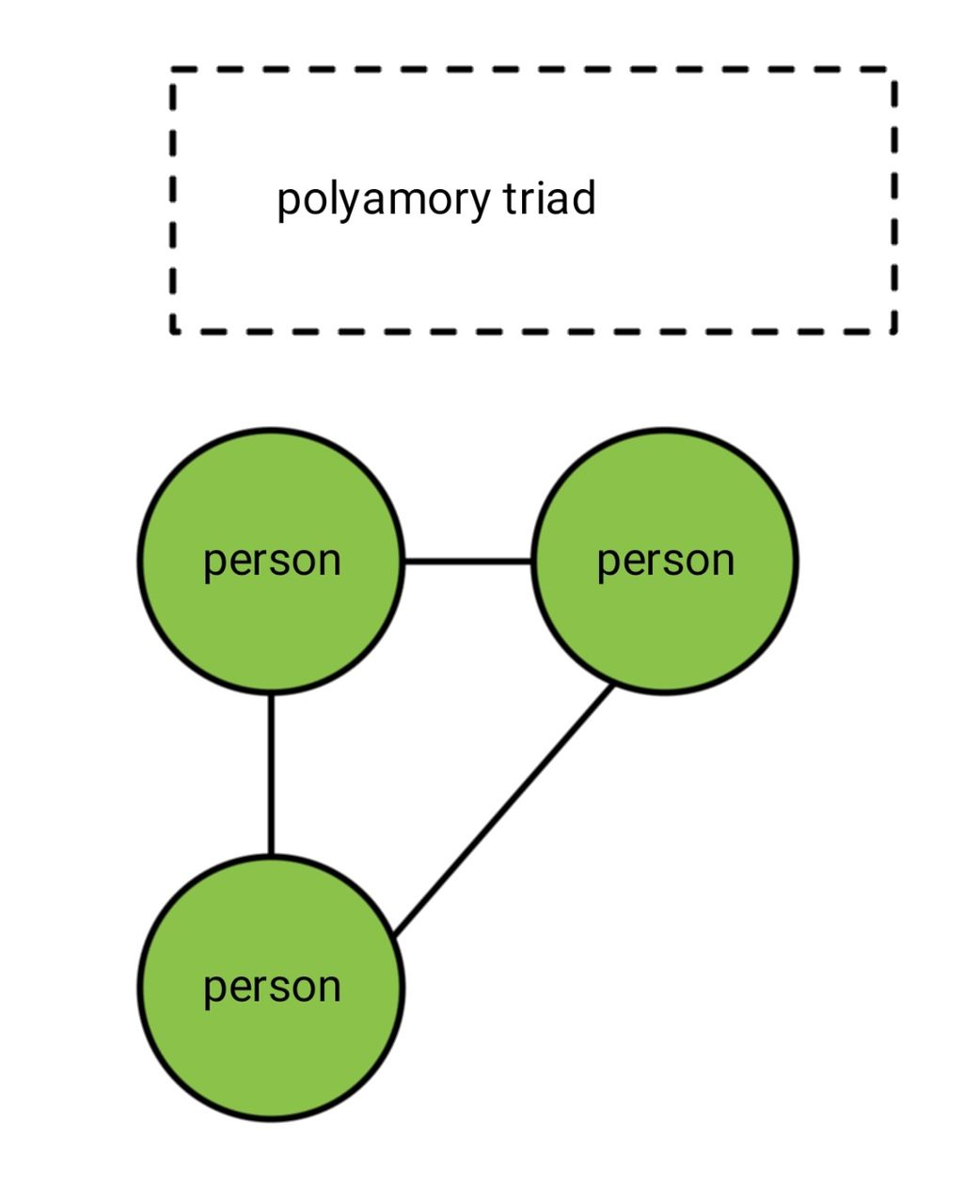 Three people who love each other and create a relationship together. One of the most popular forms of polyamory. Triad is in fact four relationships: A with B, B with C, A with C, and ABC when they are spending time all together. 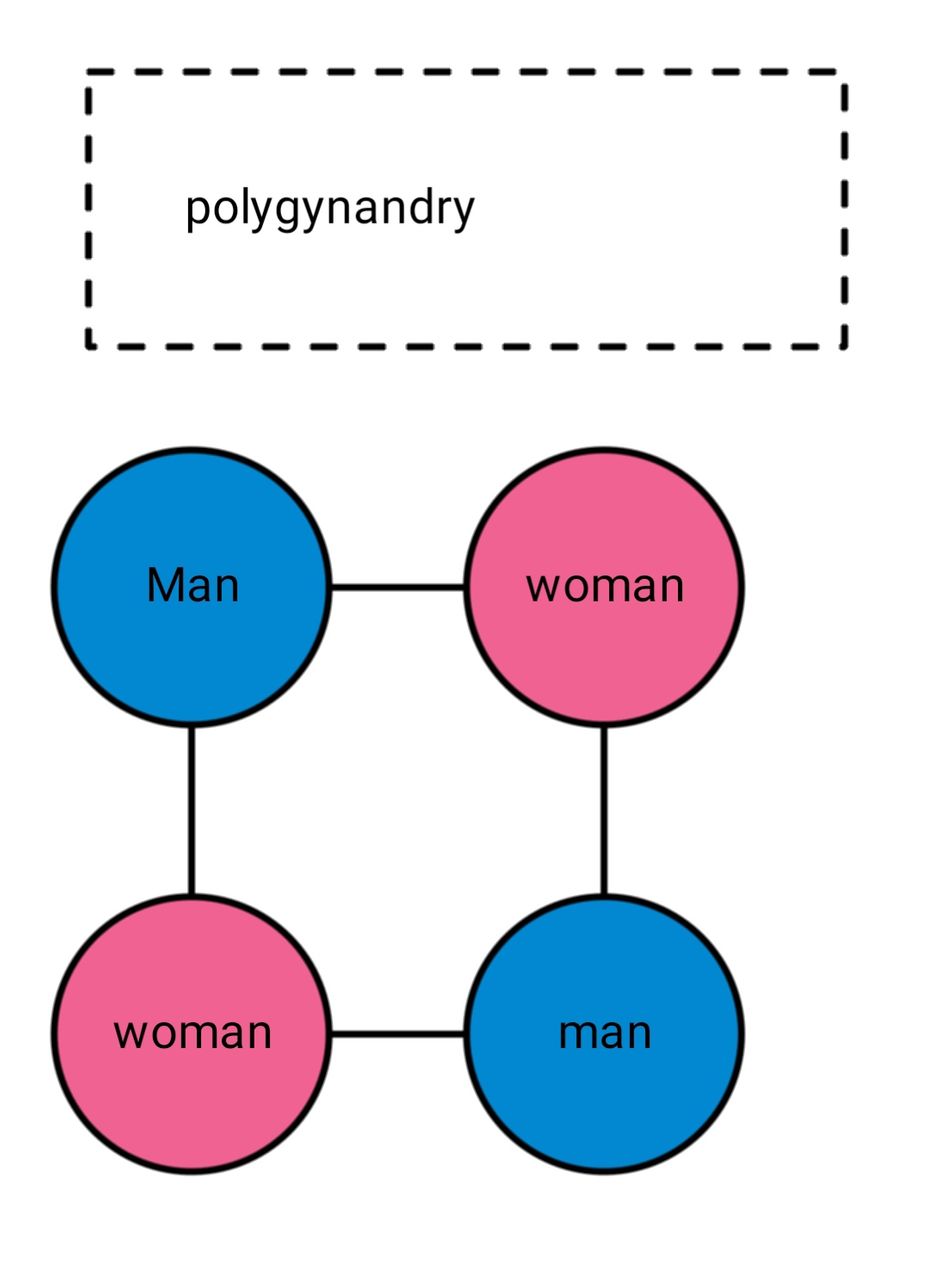 Very rare. Four people, all in love with each other. Usually, it's difficult to find three people who would love us and all our partners at the same time so even though there is plenty of polyamory relationships that include four or more people, it usually reminds more Polycule than the quad.

A special kind of quad is Polygandry - the relationship of four people creating a net of emotional interactions. It's rare, but you can find Polygandry relationships in some Tibetan regions where it's an element of the local culture.

A relationship of more than three people, taking the most diverse forms.
My Polycule is made of two triads where I am in the center and share four boyfriends but it can form any shape you can imagine, i. e. like it's presented in the picture

Different types of the relationships by interactions:

Kitchen table polyamory
A Policule or a V relationship in which, although not everyone is in an intimate or emotional relationship with each other, everyone likes each other enough to eat a meal together sometimes (friendship between members of the policule)

Don't ask don't tell
A policule in which, despite opening the relationship to new relationships, one of the partners does not want to know anything about the other partners of their other half. It is most common in type V relationships with monoamorists, but not exclusively there.

Parallel Polyamory
A version in which the person does not feel the need to make friends with the partners of their other half, but there is no problem talking about them. Something between the other two options

And other important concepts:

Nesting partners
Partners with whom we share a household, sometimes also a bank account, additional privileges and/or responsibilities

Secondary Partners
Partners that are not "Nesting partners". The name can be confusing, it does not mean valuing partners on those we love more and less, it only refers to additional privileges and responsibilities.

Swingers
Sexually open marriages that exclude emotional involvement with third parties. Swingers are not polyamorous but I have included them in this chart as it is also a form of non-traditional relationship

There are tons of types of relationships that are not traditional monogamy. All are valid and have my full respect. Some are part of the traditional cultures like polyandry in Nepal, polygamy in some Arabic countries, or Polygandry in Tibet, others have their sources in rationalism and libertarianism. All the lifestyles agree on a crucial point though - it's wonderful to love and be loved, no matter who is (are) the other person(s).

At the end of this post, let me share with you a photo of me and my kitchen table polycule. I'm in two triads with four wonderful guys. 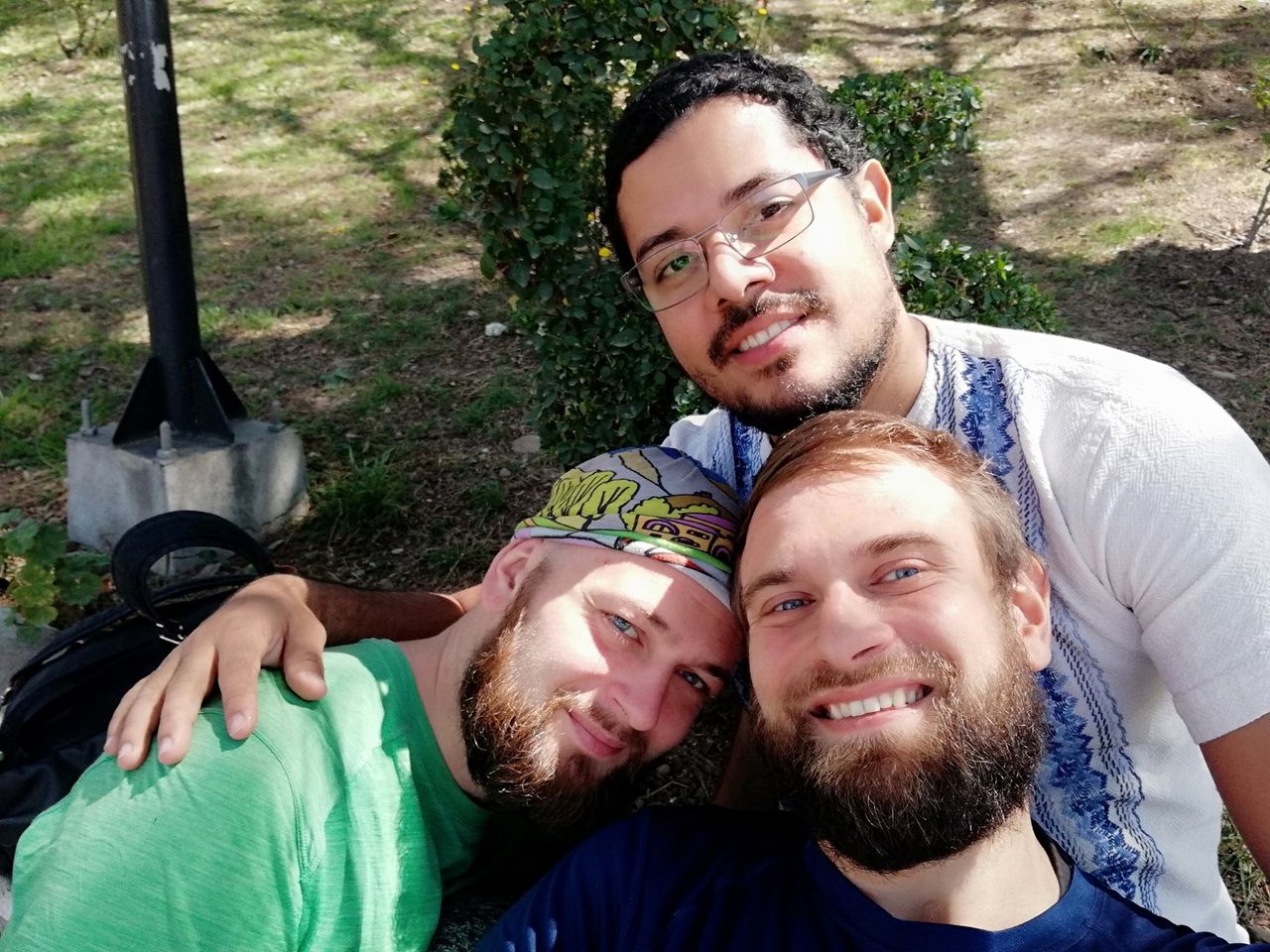 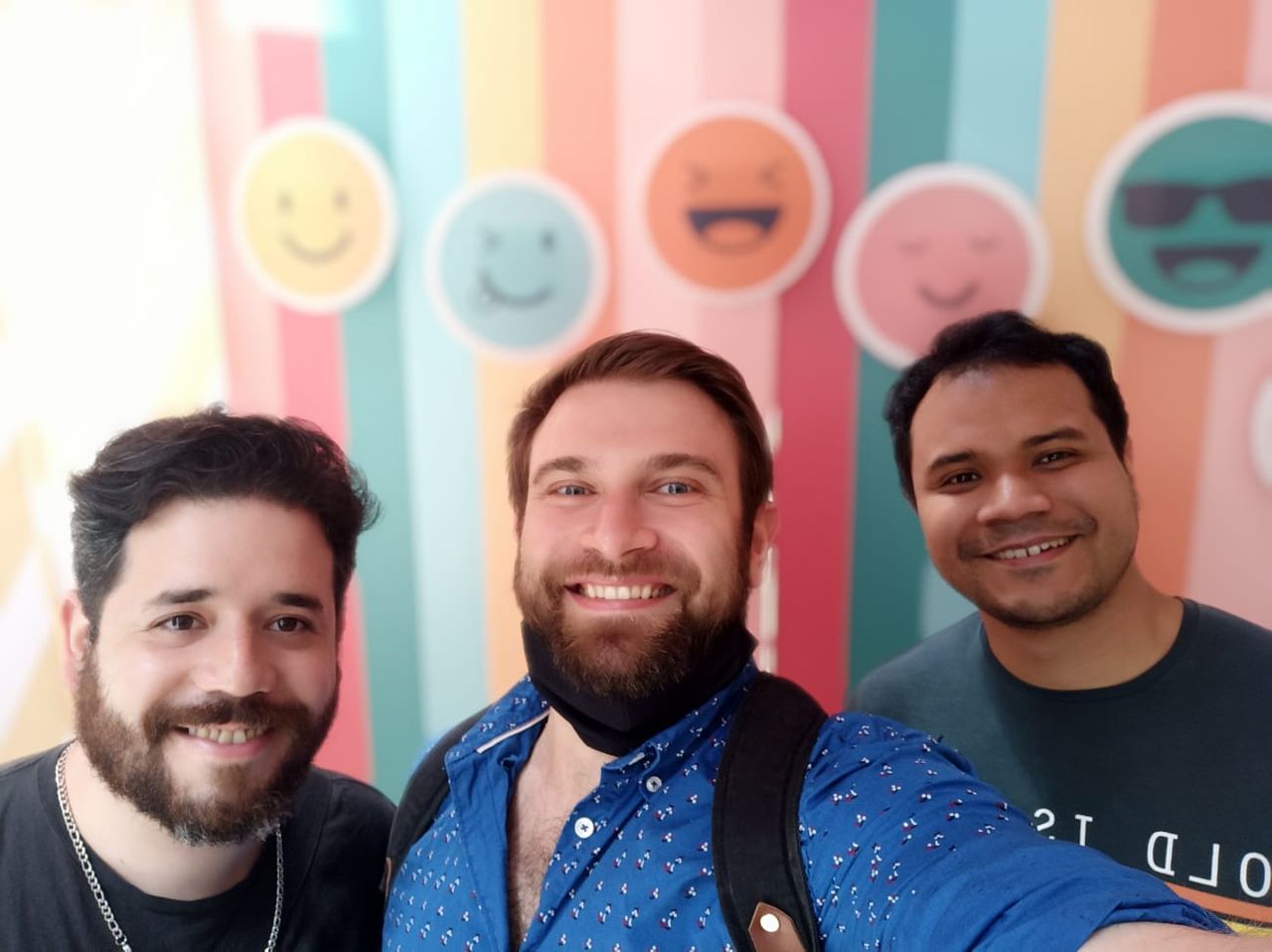 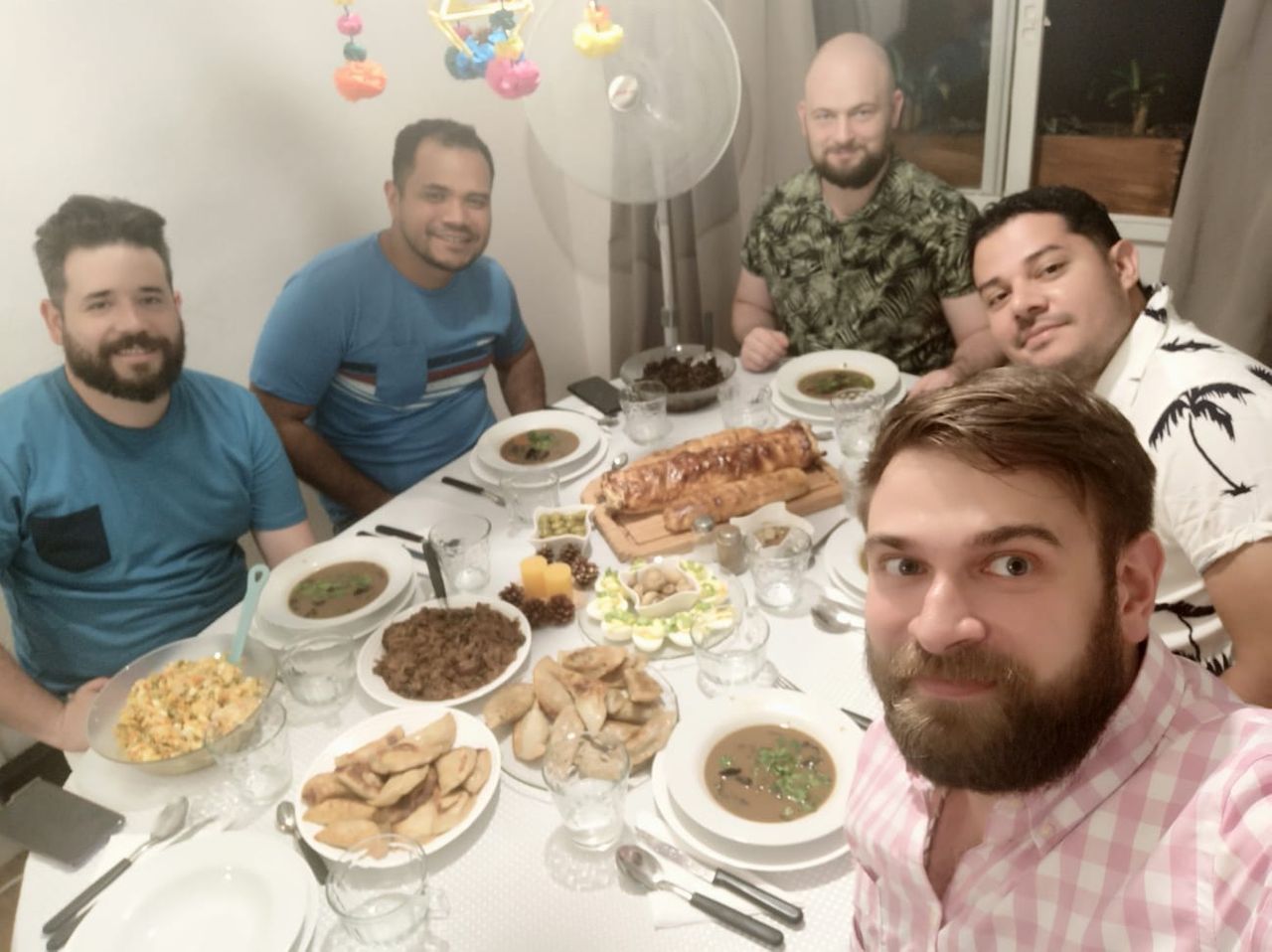 All the photos included in the post belong to me.

Thank you for reading,
@papi.mati