. Hmm, no that's not true...Today started completely different to every other Saturday I have ever had...Hang on, just entertain yourselves whilst I work out how many Saturday's I've had in my life...Wow...I've had 2649 Saturday's in my life...Ok, so today was one in 2649!

Today was the first time I attended a HiveFest and whilst it would have been cooler for it to be at some exotic destination, and face-to-face, it was, nonetheless HiveFest, and I was there.

I managed to navigate around ok and I think I had some initial microphone issues but before long I ran into my mate @azircon and we started chatting. We were in the main Stage area though and, so we didn't annoy the speakers and listening-crowd, we adjourned to the Lobby which is in fact a vast garden area with a cool campfire to sit around and chat. There we did so, chat I mean. 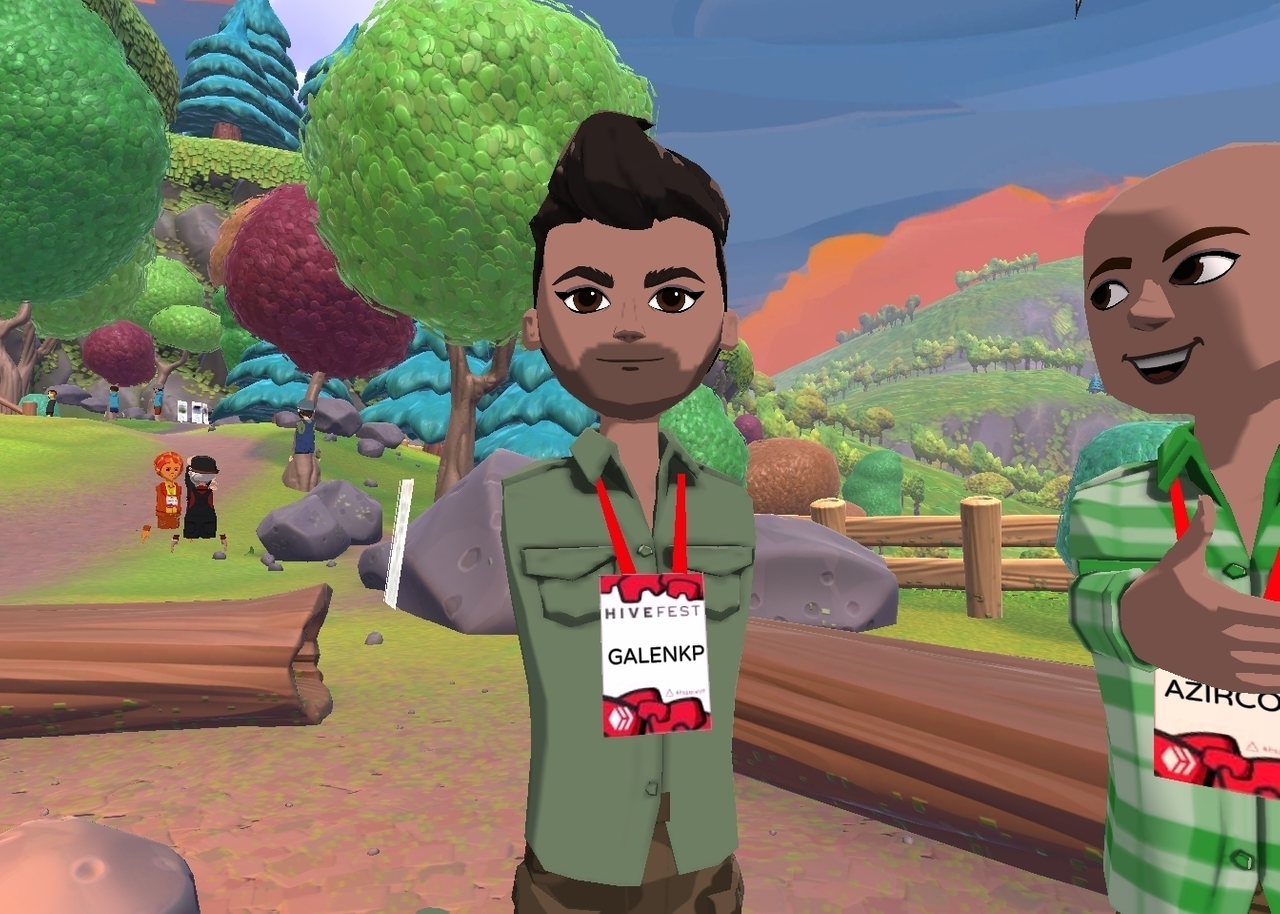 Here's azircon and me chatting - My apology to you for cutting you off in my selfie, but you know me mate, a bit tech-challenged.

Leading up to HiveFest I've been a bit nervous about the technology and social interactions in this environment but it seemed to work fine and we were able to converse in a similar way to how we would in person. It was really cool to talk a little about hive and about his job which he has kept completely off the blockchain. I think it's ok to call us friends, but after this conversation today I admit that it all felt a little more real. Fancy that...Real in a virtual world!

Throughout our chat people would pop in and out, join in, and then leave as they wished...It was not unlike an in-person meet up and all quite civilised.

I know a few had some trouble and one such was my mate, fellow Australian @riverflows. She had mic issues and her computer was crashing apparently so I did what I could by message on Discord to assist but she just couldn't make it work. @krazzytrukker was there too, but again, he had troubles as his wifi was a bit sketchy. I also got a message from @revisesociology who simply couldn't get it to work. I'm sure there were others also which was a shame. I'm hoping they are around Sunday morning for day two.

Just a word on the day thing...It all kicked off at 3:30am Saturday my time but the event is scheduled as Friday and Saturday, the organisers time-zone I guess. This is why I say Saturday for day one and Sunday for day two. 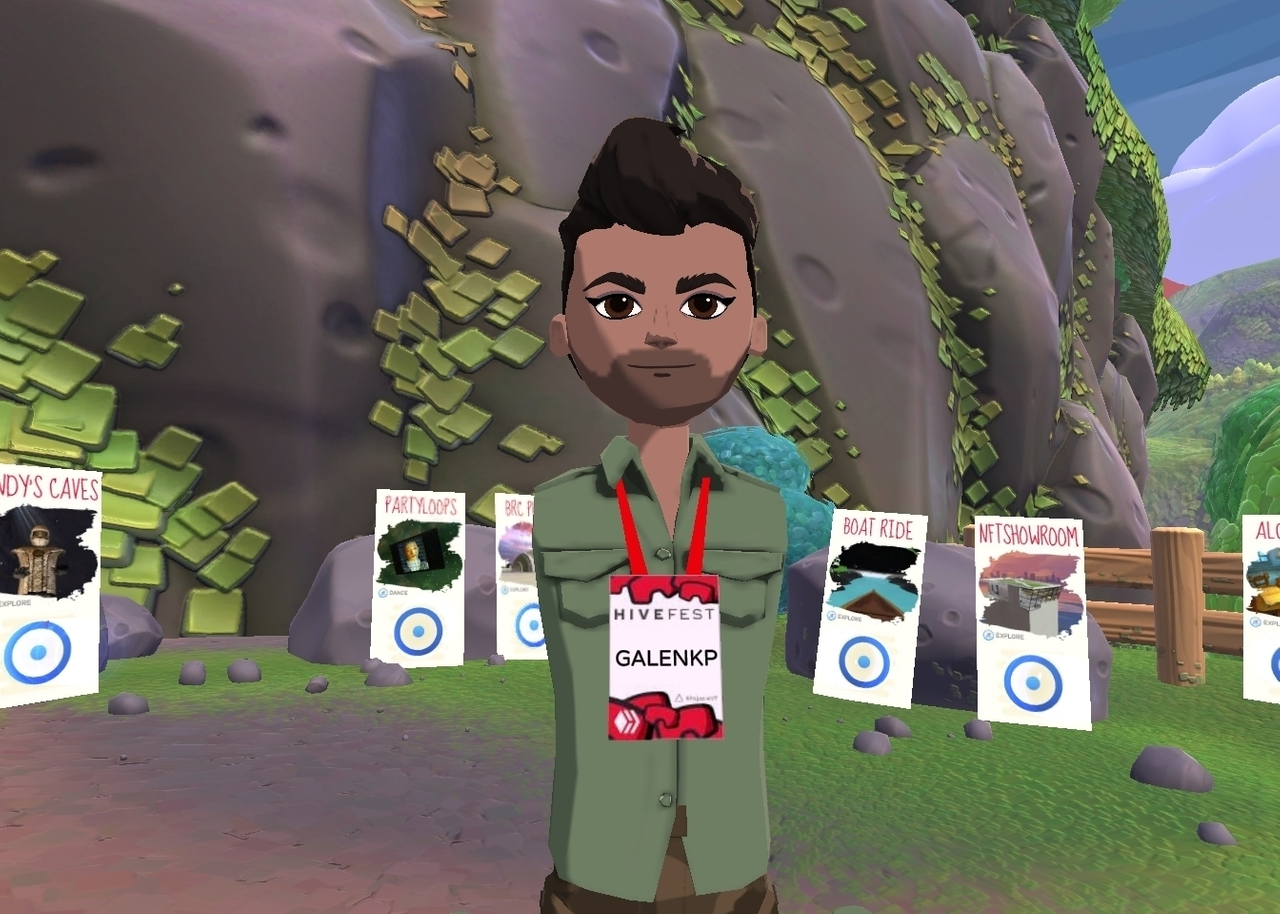 Some of the teleport locations behind me.

One of the cool things is that there's various locations one can teleport to. One just wanders up the hill past the check in hut, which is where one get's their HiveFest name card, and there's a bunch of these portals. They can be good to explore or maybe use for a nice quiet place for a quiet chat with someone.

I was around the campfire with azircon and a few others when along came a nice chap called Danny Qwoyn, I don't know his hive user tag, who rounded a group of us up to go and tackle the maze via one of these portals. We teleported there and in we went hoping to make our way to the huge pyramid, more Aztec-looking than Egyptian. We were going great and made it about half way and then...I got lost. I don't know if they made it through but for me...Well, I hit the menu and teleported back to the lobby area; The easy way out.

Not one to be content with just that adventure I joined the crew again in the caves via another portal where torches were required to navigate through. Danny the adventurer was there again and he took a photo of us all so it may turn up at some stage. It was cool though, just a bit of fun.

After that adventure I headed off to the NFT Showroom for some culture and artwork. It was really cool. 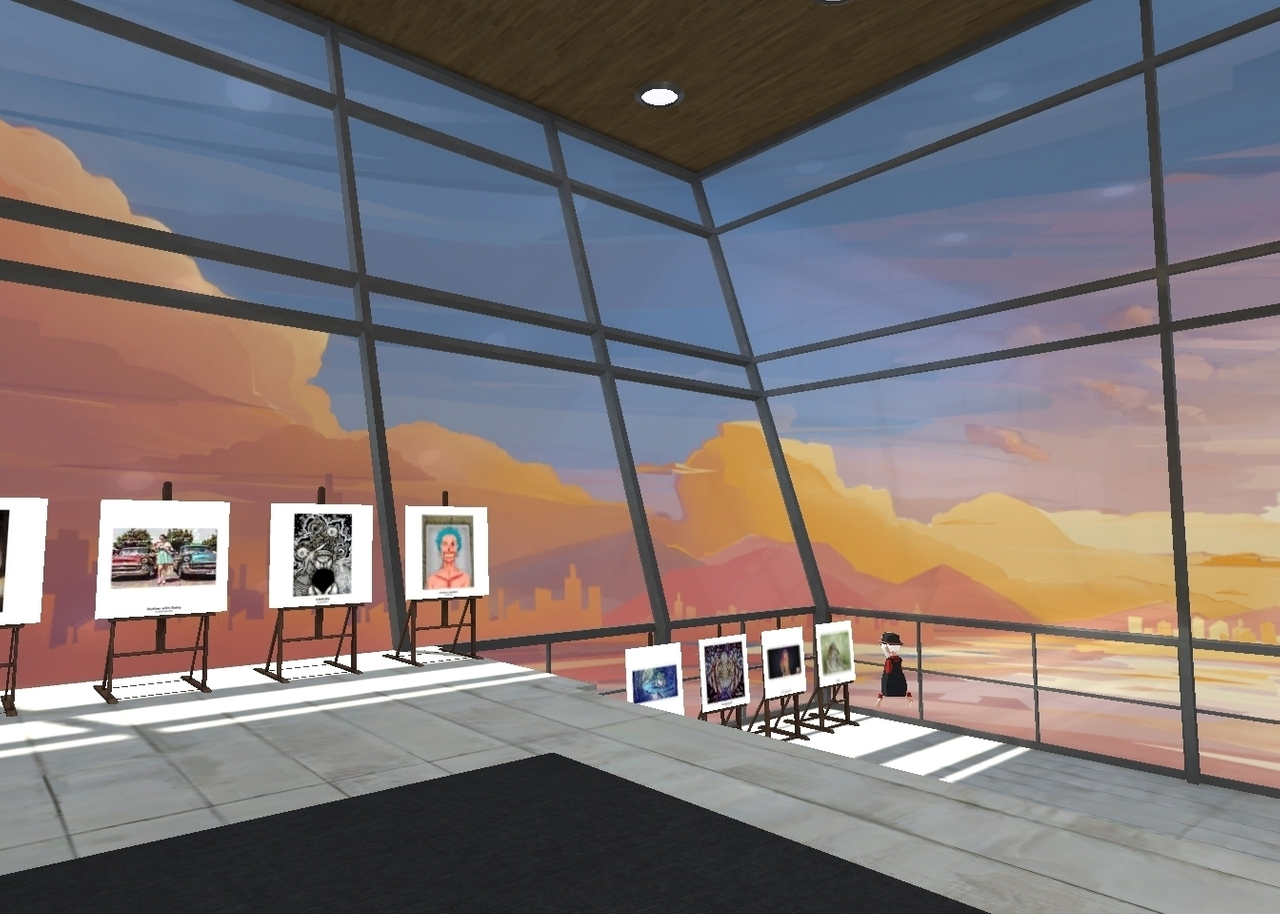 The NFT showroom is a fairly large space filled with artworks from all across hive with their creators names attached. It was amazing to see so many all collected in the one place and a nice endorsement for the artistic talent on hive! Of course I saw many from people I know as I browsed around.

As I wandered around I ran into a few people I know; I won't tag them as some are very large accounts and it looks dumb to tag people like that. I stood and listened in on their discussions and wandered around a little to explore the quite large NFT Showroom building, even venturing onto the roof as well. Again, it was all quite easy and reasonably enjoyable. 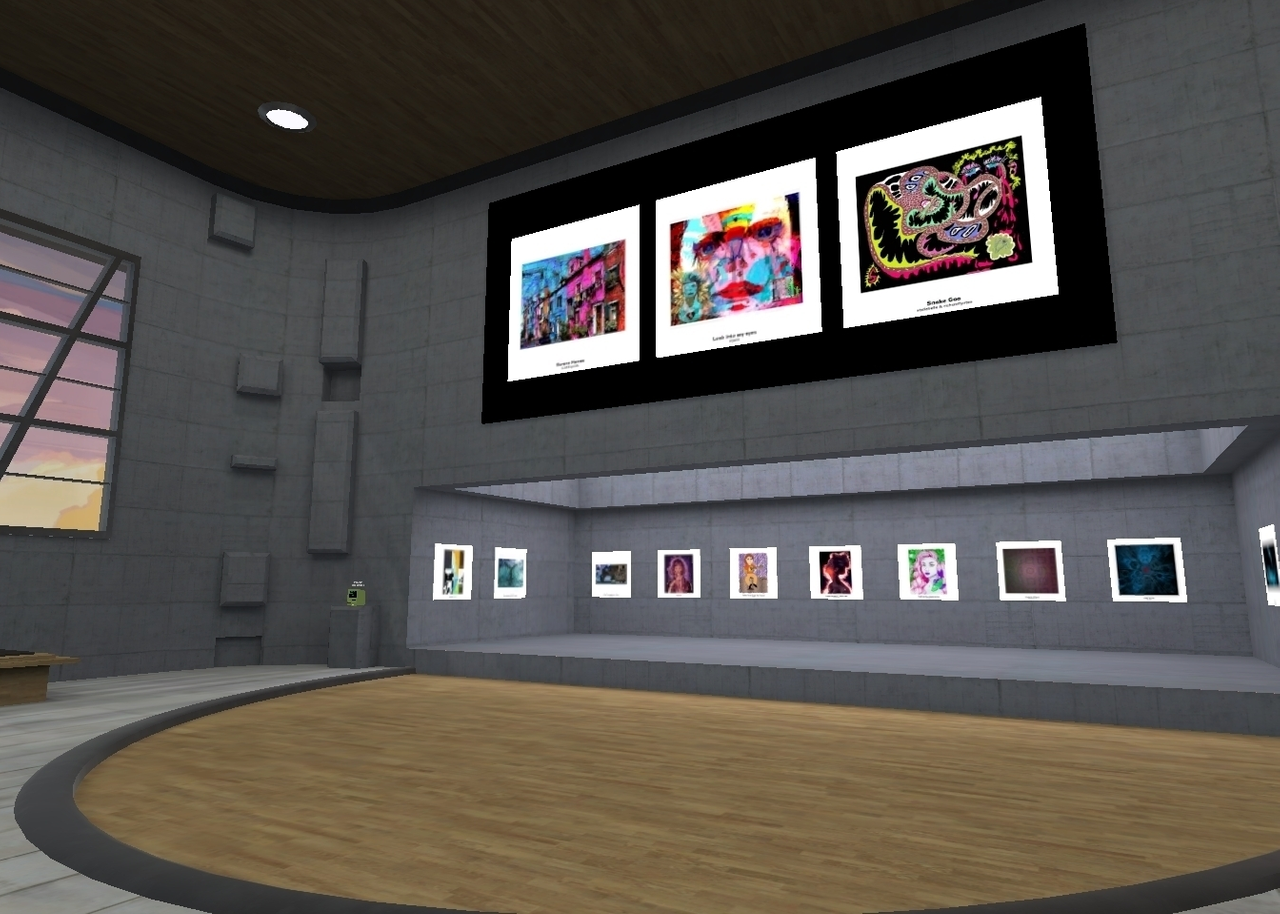 I was at HiveFest for a little over three hours and have to say that despite my initial reluctance to be there I didn't mind it at all. Yes, it would be way better in person...Like way better, but we can't do that and so this is the next best thing. It's been a year of adaptation right?

I'll be back tomorrow for day two and may stay around for a little longer. I really hope that some of those others who struggled to get it to work will be there but if not well...It's HiveFest and with all those hivers in the one place I'm sure I'll find someone to talk to.

Lastly on hivefest...@azircon and I were talking about using AltspaceVR for meetings of a smaller nature. Each user has a home area and it could be a cool spot for smaller groups to schedule times to meet and hang out. I think we'll be investigating that possibility and moving forward it could be something we do once a month or so. We'll see.

After my first time at HiveFest I headed out to do some yard work at home...And you know what? I decided to keep the first's happening on the 2649th Saturday of my life and so when I mowed the lawn...Wait for it...I mowed the lawn from the outside edge to the centre in concentric circles. Yeah I know...Crazy talk. I usually mow in straight lines but what the hell...It's a day of first's! It looks bloody good too! (Not as good as my straight lines though.)

After some yard work I did a session, lifting weights, and now...Burger and a coke and writing this. Legit Saturday? Yeah, I know...Legit.

So talk to me people...Tell me what you're up to, where you're at, what your HiveFest experience was like, if you were there. What's your weekend plan or is it freestylin' this weekend for you?