My Views on Systemic Racism Since the death of George Floyd (African American man who died\killed during arrest in the USA) in May 2020, systemic racism has become a hot topic in many countries. Prior to this incident, the terminology 'systemic racism' was not commonly used (see, Figure 5 later in the post). However, the topic of racism has been receiving greater attention in the mainstream media since around 2011 (see, Figure 1 later in the post). In this post, I discuss and present my views regarding racism and systemic racism. Most of the evidence and information presented in this post is based on the USA. This is because information was more easily available. Therefore, some of the information presented may not be relevant to many countries.

Definitions of Racism and Systemic Racism The unfair treatment of people who belong to a different race; violent behaviour towards them (Oxford Learner’s Dictionary).

Harmful or unfair things that people say, do, or think based on the belief that their own race makes them more intelligent, good, moral, etc. than people of other races (Cambridge Dictionary).

Is a system in which a dominant race believe they are superior and benefit from the oppression of other races - whether they want to or not. We don't live in a society where every racial group has equal power, status and opportunity (Urban Dictionary).

Is the belief that groups of humans possess different behavioural traits corresponding to physical appearance and can be divided based on the superiority of one race over another. It may also mean prejudice, discrimination, or antagonism directed against other people because they are of a different ethnicity (Wikipedia).

A belief or doctrine that inherent differences among the various human racial groups determine cultural or individual achievement, usually involving the idea that one's own race is superior and has the right to dominate others or that a particular racial group is inferior to the others (Dictionary.com).

Policies and practices that exist throughout a whole society or organization, and that result in and support a continued unfair advantage to some people and unfair or harmful treatment of others based on race (Cambridge Dictionary).

Racism based in a system used to discriminate against a minority in subtle but important ways I.e. housing inequality, underfunded predominantly black schools, over policing/arrest quotas, and voter id laws (Urban Dictionary).

It is a form of racism that is embedded through laws within society or an organization. It can lead to such issues as discrimination in criminal justice, employment, housing, health care, political power, and education (Wikipedia).

A policy, system of government, etc., that is associated with or originated in such a doctrine, and that favours members of the dominant racial or ethnic group, or has a neutral effect on their life experiences, while discriminating against or harming members of other groups, ultimately serving to preserve the social status, economic advantage, or political power of the dominant group (Dictionary.com).

Trends in Racism and Systemic Racism The definitions should help us understand what is meant by racism and systemic racism. The next area we should explore is the trends in racism and perceptions of racism. A good place to start is with the mainstream media. Figures 1 and 2 contain the frequency of usage of the word ‘racism’ and phrases such as ‘systemic/structural/institutional racism’ and ‘racial inequality’ in several major American Newspapers such as the New York Times, Washington Post, Los Angeles Times, and Wall Street Journal.

Figure 1: Frequency of the use of the terms ‘Racist’ and ‘Racism’ in Newspapers Figure 2: Frequency of the use of the phrases ‘Systemic/Structural/Institutional Racism’ and ‘Racial Inequality’ in Newspapers Source: Tablet
Note: I have included the founding of Black Lives Matter (BLM) in Figures 1 and 2 and several other figures to identify any possible relationship between racism and racism awareness, and BLM.

From 1970 to 2011, the usage of terms such as ‘racist’ and ‘racism’ and phrases such as ‘systemic/structural/institutional racism’ and ‘racial inequality’ remained close to constant. From 2011, the usage of these terms and phrases started to increase dramatically for all four of these newspapers. This could be an indication that issues around racism were becoming more significant or it could be an indication that the mainstream media want the public to focus more on racism and race related issues and events.

Polls conducted in the USA by Gallup indicated people felt that relations between White and Black people had deteriorated since around 2013. See Figure 3 below.

Figure 3: Gallup polls regarding relations between White and Black people The polls indicate perceptions around quality of relations between races remained constant for at least a decade before 2013. After 2013, opinions started to change considerably. Around half as many people in 2020 believed relations between White and Black people were very good or somewhat good as they did in 2013. This decline in perceptions align with the founding of BLM. This may indicate that BLM contributed to increased racial tensions. However, it is possible that BLM were creating awareness of issues such as racism and systemic racism, which could have resulted in more friction in relations. It is also possible the decline is just a coincidence. Exploration of more data and information could shed more light on these possibilities.

Another indicator we could look at is the trends in crimes motivated by racism. Statista has data relating to hate crimes. Approximately 58% of hate crimes have been attributed to race/ethnicity/ancestry bias Department of Justice. See Figure 4 below.

Figure 4: Hate crimes in the USA Source: Statista
Note: The FBI defines a hate crime as a criminal offence against a person or property motivated in whole or in part by an offender’s bias against a race, religion, disability, sexual orientation, ethnicity, gender, or gender identity – FBI

Hate crimes were relatively low and in decline when the mainstream media starting paying more attention to racism and when BLM was founded. Hate crimes did not reach relatively higher levels until 2017, where it has remained relatively high. This indicates that mainstream media were not focused on reporting racism but instead were drawing attention to the topic of racism even if it was not becoming more prevalent. The same argument could be made in regards to BLM.

Another interesting indicator to look at is Google search trends for words and phrases such as ‘racism’, ‘systemic racism’, and ‘institutional racism’. Figure 5 contains the trend in Google searches for ‘racism’ in the USA between 2011 and 2021. Source: Google Trends
Note: numbers are in relation to highest search, which is represented by 100 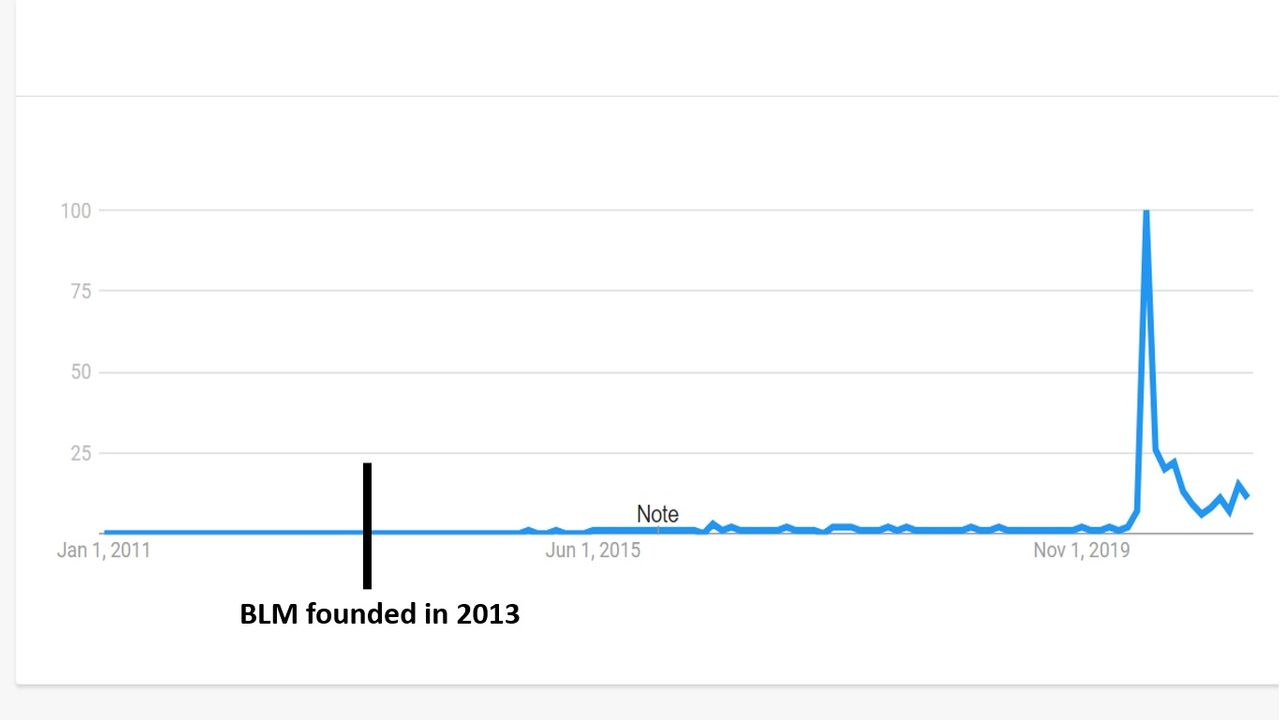 After the death of George Floyd, the number of Google searches increased by over hundredfold. Within about two months, the number of searches dropped by about tenfold and then remained at least five times higher than prior to the spike in searches. This indicates that many people were not familiar with the terminology ‘systemic racism’. Alternatively, we should consider the terminology 'institutional racism'. Figure 7 contains the trend in Google searches for ‘institutional racism’ in the USA between 2011 and 2021. The trends in frequency of Google searches for terms and phrases such as ‘racism’, ‘systemic racism’ and ‘institutional racism’ indicates mainstream media have not responded to increased interest or concern regarding racism. Neither have they really sparked much interest in it either. However, the events around May and June 2020 in regards to George Floyd and BLM protests and riots did spark considerable interest in racism and race related issues even if it was just for a short time.

Questions around racism and systemic racism We can confidently conclude that racism exists. However, it is less clear about the extent and causes of racism and even the trends in racism. Most of mainstream media claim racism to be a serious problem and many would claim it to be getting worse. Polls on people’s concern, crime, and interest also indicate that racism could be becoming a bigger problem. However, it appears that the mainstream media’s focus on racism is likely to be driving it. The key evidence to support this claim is that mainstream media attention precedes any evidence of any increase in racism.

People might be subject to more police searches based on race or based on police profiling, which could be based on race. If police are targeting people based purely on race, it should be considered as racism. If police are targeting people based on profiling, which is based on race; we could argue the police are not necessarily racist but instead their actions are arguably a product of systemic racism. Next question we need to ask is whether profiling based on race is done with intent to disadvantage a particular race or done based on the perception of a greater threat from people of a particular race. The former is prejudice-induced racism. The latter is still racism because a person is being treated differently based on his or her race; however, some would argue that this form of racism could be considered justified.

The motives behind the usage of terminology such as systemic racism Racism is a very sensitive topic for many people. The use of terminology such as systemic racism is likely to fuel anger from people who believe they have been disadvantaged based on their race as well as people who are being accused of disadvantaging people from other races or benefiting from a system based on their race. Racism does exist. It can be difficult to identify from one off incidences but can be more easily identified based on patterns of behaviour. Systemic racism based on prejudice may exist and systemic racism based on discrimination does exist. However, many policies, laws, systems, etc. that appear to disadvantage a particular race are not designed with that intent. These policies, laws, systems, etc. could disadvantage a particular race based on another criteria that disproportionately affects a particular race. For example, wealth, income bracket, or political gain. Therefore, the terminology 'systemic racism' is overused. Instead, terminology such as systemic discrimination would more accurately describe policies, laws, systems, etc. which favours one group of people over another.

Pushing the narrative of systemic racism is likely to turn different races against each other; this can be seen from polls, crime data, and actions of people at protests and riots. This is a divide and conquer strategy; the people become too busy and obsessed with fighting each other that they fail to see who benefits the most from current policies and laws. Systemic discrimination does not create such a strong divide amongst people. Instead, it highlights that the current system is biased whilst leaving people open to make up their minds in regards to who actually benefits the most from current systems.