quotes-haven69
4 months ago
inPaper in my Pocket

Sarcasm is a sharp, bitter, cutting expression or remark; a bitter gibe or taunt. Some are downright insulting, while some are rude, and at the same time, humorous. Sometimes, people are momentarily stunned by a sarcastic remark. They are not sure whether whoever said it was being funny, or whether they were being rude. They do not know whether to laugh, or to feel offended.

Call them sarcasm, glorious insults, or whatever you can come up with, the following bitter, or cutting expressions, will surely bring on a chuckle, or a smile at least. Enjoy! 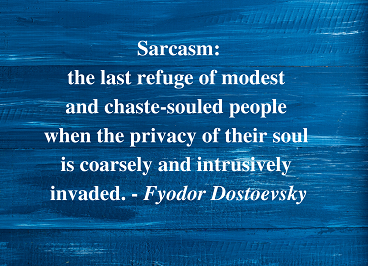 Nowadays, you can't call a spade a spade anymore. You have to be creative and come up with terms, or other names for the said spade. In our progressively civilised society, we have to be mindful of our politically correctness. Here are some...

Politically Correct Ways to Say Someone is Stupid