The MSM is lying to bolster support for mandates and passports

Most of us are against segregation and discrimination, but the media tells us most of us approve of vaccine passports. We're called anti-vaxxers, but my experience at dozens of recent protests here in BC Canada tells me we're actually just anti-tyranny. People don't want to live in a society where a large portion of their friends and families are considered "unclean", inferior, unworthy, dangerous, and so on, merely because they have not participated in an experimental gene therapy. The media says almost everybody wants tyranny, but they're lying. 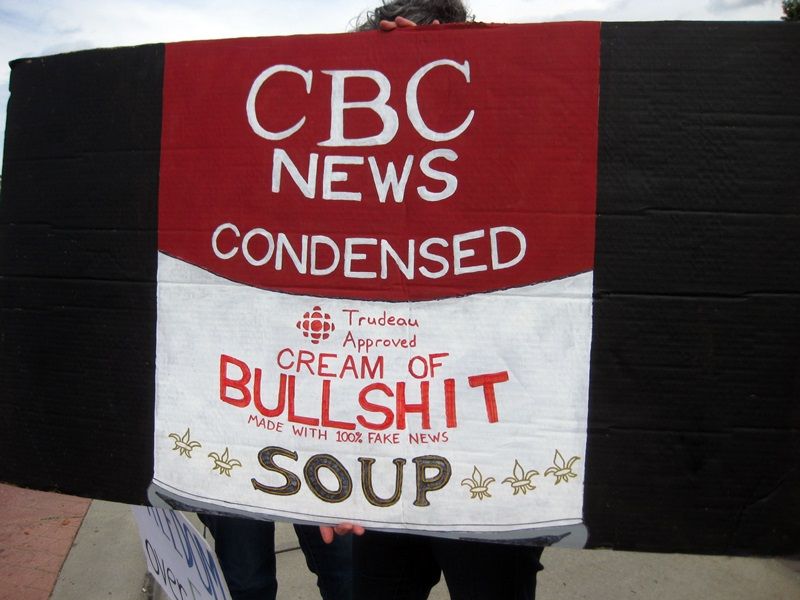 At my local anti-lockdown pro-freedom rally today (held every Saturday from noon to 2pm), a man dropped off a large case of Gatorade and a large case of bottled water. He handed out some of the bottles, and thanked the protesters for being there. He was about 40, muscular, healthy-looking, and friendly. Before he left, I introduced myself and thanked him for supporting the protest. His reaction was interesting. I'll paraphrase him.

'No, thank YOU. I still have a job, at least for the moment anyway, and I can't join you out on the sidewalk. But I want you to know a few things. You're not alone - there are a LOT of guys like me, who are with you 100%, but just can't be here for whatever reason.'

'My wife is going to be fired for not taking the vaccine. My best friend is about to be fired for not taking the vaccine. I don't know how long I've got. But another thing I want you to know is, if the government doesn't back down on this, and if they start trying to deny access to groceries and basic needs, there will be a response. It's not going to fly. There are just too many people who aren't okay with that, who are armed to the teeth and ready to roll. If they start activating these internment camps, if they start blocking access to food, there'll be Hell to pay. It's not happening, not here.'

'My family left a communist country in the 1980s, to come to Canada for freedom. So we know what the signs of tyranny are, and let me tell you, they're all in play right now. This is a communist takeover, pure and simple. But there's going to be a resistance. A lot of people are waiting for the right moment to respond. They don't want to get set off too early. But that moment is coming, you can tell, things are escalating. But I just want you to know, we have your backs, this isn't going to be the end of freedom in Canada, and you have a lot more support than the media is reporting.'

The media is desperately trying to manufacture consent for segregation in Canada, stoking hatred and fear of "anti-vaxxers" (which is really just anyone that isn't completely pro-state and pro-narrative). But more and more are seeing through it, and will never be able to un-see. Once you know you're being deceived and manipulated, you don't forget.

There's a huge division in Canada, and much of the world.

On one side, the state, big pharma, the media, and anyone still caught in their spell.

On the other side, the majority. The ever-growing majority, that won't put up with tyranny, communism, or segregation.

The reason for division is so we can be conquered. My sign today, in big bold letters, was:

The waves, honks, thumbs up, cheers, and "thank you!"s were almost nonstop. We are not some tiny fraction of society. We ARE society. The tyrants and their collaborators are emboldened by the mainstream media's nonstop propaganda, but they are on the wrong side of history.