India made global headlines in May with Covid's new "Delta variant" threatening to collapse the country. Vaccine useless, they gave Ivermectin to millions, and by July their pandemic was over... but no global headlines. 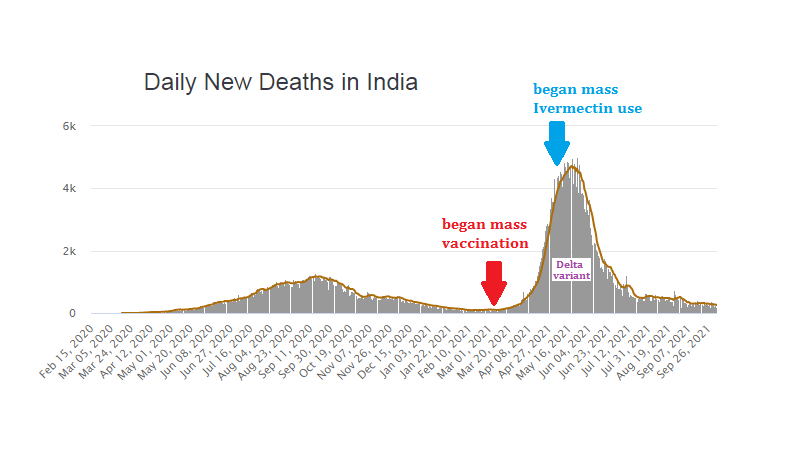 Today, "Delta variant" is being used to justify ongoing lockdowns, vaccine mandates, and "passports" in countries around the world. It is said to be more transmissible. We're desperate for a hero, they say. Yet a complete blackout in the mainstream about Ivermectin, and when they do mention it, they say it's horse paste with dangerous side effects. But India gave out millions of doses of Ivermectin to patients with symptoms or exposed to others with symptoms, in a very short amount of time, with no doctor supervision or safety checks of any kind. It cost pennies. NOBODY died. The number of lives saved is hard to measure, but it's clearly into the hundreds of thousands. Nothing from the Western media whores. Meanwhile people here are still dying of a curable virus, and being put on horrible (and expensive) drugs like Remdesivir that literally destroy kidneys and fill lungs with fluid. We're still not treating people with symptoms until they're unable to breathe, and then putting them on respirators, which don't usually work. And we're pushing a nearly-useless and very-dangerous "vaccine" as the only solution, which now comes with a digital health passport for access to society.

India is completely over the virus. They ushered in Delta variant with mass vaccination, then defeated it with Ivermectin. We heard about "the India mutation" and it was used to spread fear worldwide. But once they distributed Ivermectin, Western media started calling it "Delta variant", to continue the fear but remove focus on India. Because India shows that Ivermectin is safe and effective against Covid. And that doesn't fit the narrative.

Here's what was distributed to infected (and potentially-infected) households in hard-hit Uttar Pradesh areas, starting May 5:

Each kit cost the government less than 3 dollars! Without a doubt, deaths dropped starting the week after mass distribution of the kits. We could even take a look at when cases began to drop: 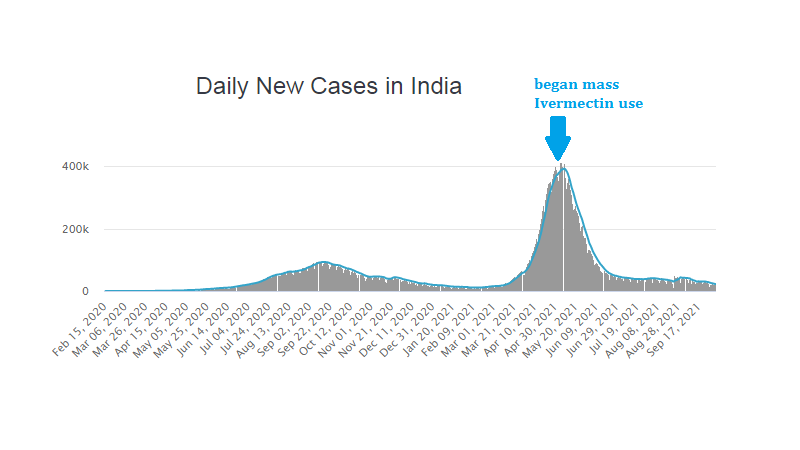 Within a few days of the kits flooding into the sickest areas, new cases mercifully peaked, and have done nothing but fall steadily toward zero since then. The rest of the world is heading into further waves, and more rounds of "vaccines", but India is a different story.

A story that isn't really being told, in many other parts of the world.

Why? Some believe it's mere sloppiness. Others think it's greed and corruption. I see a global technocratic takeover via "vaccine passports". But the fact remains, India defeated Delta variant (and Covid in general) as soon as Ivermectin went into widespread use, and many in the West don't know that. I've documented its heavy censorship.

Ivermectin has shown benefits for prevention of Covid, early treatment, late treatment, and even "long haul covid". It's even curing other problems people have had for years, and not known how to deal with. After billions of doses given worldwide over decades, this Nobel-Prize-winning naturally-occurring compound is one of the safest pharmaceuticals known to humankind. It's far safer than the Doxycycline - or even the Tylenol - included in those Covid kits!

Ivermectin is safe, effective, and censored. 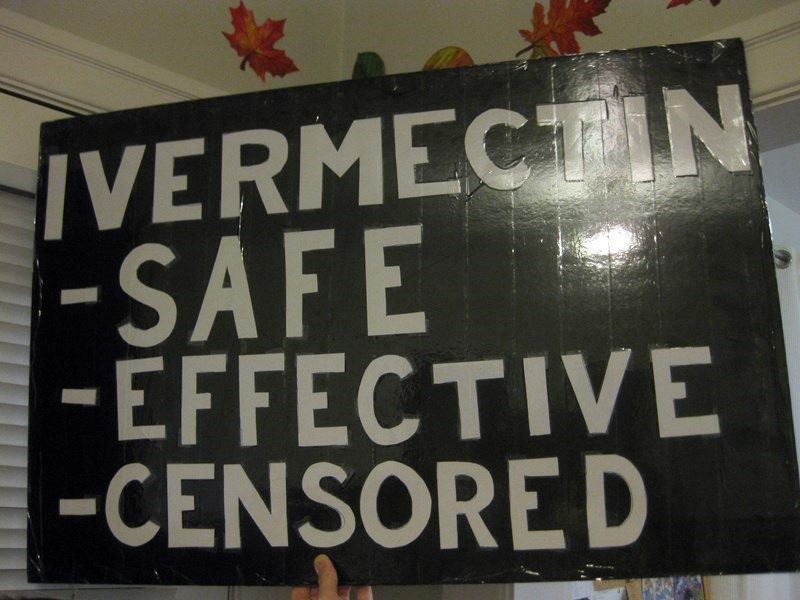 I've had the symptoms known as "long covid" for 5 years now. Neurological and autoimmune - chronic pain, muscle twitching, vision problems, fatigue, brain fog, etc. It came on suddenly after being healthy my first 40 years. Then in late Feb 2020 I got a sore throat, cough, and fever, before the lockdowns. It lasted several weeks on and off, and my wife and baby son had it as well (although they had milder symptoms). Then it faded into the background, along with my other "long covid" symptoms.

Long story short, Ivermectin might help me, and there's essentially no chance it could hurt me. I'm determined to try a course of it, like so many millions have, including respected experts. Besides, I already decided to get my hands on a supply of it, in case my family needs it going forward. It's not illegal in Canada, just not available by prescription. I haven't had any luck so far, but stay tuned because I'm going to be sweetening the deal very soon.

India and other countries are using Ivermectin to safety treat and cure Covid in all its stages. The pandemic could be over, if we allowed the truth - and the Ivermectin - to flow.

There's no reason for the brutal censorship of Ivermectin. It's not a threat to public safety.

I greatly appreciate all help spreading the truth about this vital topic.
DRutter