If the vaccine is working and deaths are down, why are lockdowns getting tighter?

In Canada, far fewer people are dying now than during the first and second waves. The third wave was barely a blip, and already headed lower. Most people who want a "vaccine" have got one. And yet, Canada is under the harshest lockdown ever right now, and they're talking about going 'full draconian'. What's going on? 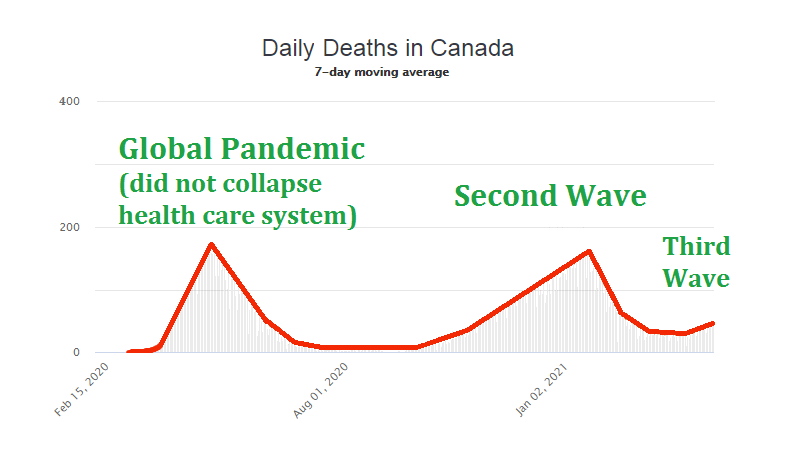 While Canada is a few weeks behind the USA in the vaccination effort, it seems most states and provinces have already (or soon will) hit peak demand for vaccines. Most people who want one have got one, a point which has been greatly anticipated by the mainstream media and government officials. Now, the focus can turn to "vaccine hesitancy", already being blamed for dragging out the pandemic, lockdowns, social carnage, and economic hardship.

"And then suddenly it just was our turn. And that was really exciting," Betsy Hilton said. "No hesitancy here, that's for sure. A vaccine with minuscule, don’t-even-worry-about it risk? Puh-leeze. This is GenX. We ate Pop Tarts for breakfast and got babysat after school by Y&R. I spent decades on oral birth control. And now we’re crashing all the pharmacy websites for that sweet, sweet AZ." 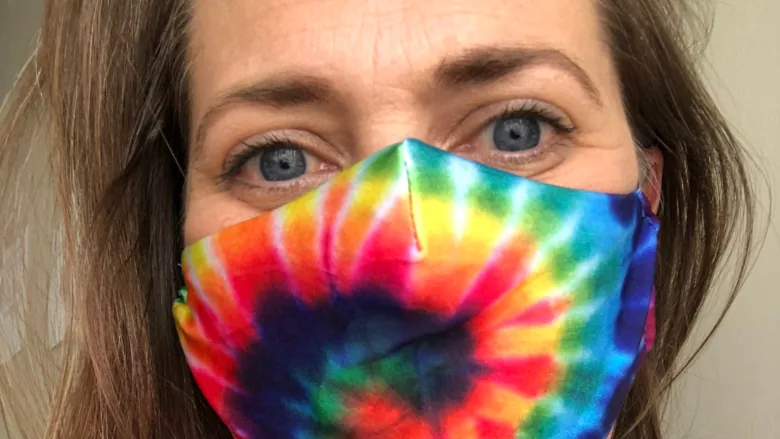 Speak for yourself, "Betsy Hilton". Your opinion is about as unbelievable as your name. The real 40-somethings I hang out with know we're at minimal risk from the virus, but at least moderate risk from the so-called vaccines. For us, it would be like playing Russian roulette - with no prize. What's the point?

The media continues to manufacture demand for this rushed, untested gene therapy. They didn't even get half the population, nowhere near the 85% Fauci and friends say is required.

This should be over

As we can see by the updated daily deaths graph, Canada's "third wave" is tiny, and already done.

If everybody who wants a vaccine has now gone one, the pandemic is under control, and the health care system didn't collapse even at the height of the main wave... Why are the lockdowns getting MORE restrictive, now?

Most Canadians are living under total lockdown - unable to leave their homes except for essential purposes, stopped to show papers by police, essentially waiting to be slaughtered like livestock that are no longer profitable.

Here in BC, I was at a huge anti-lockdown protest yesterday, with 4000+ people, no social distancing, no masks. Freedom! It was very powerful to gather with other liberty-loving free humans. Peaceful non-compliance was the vibe. People are sick... of the tyranny and lies! 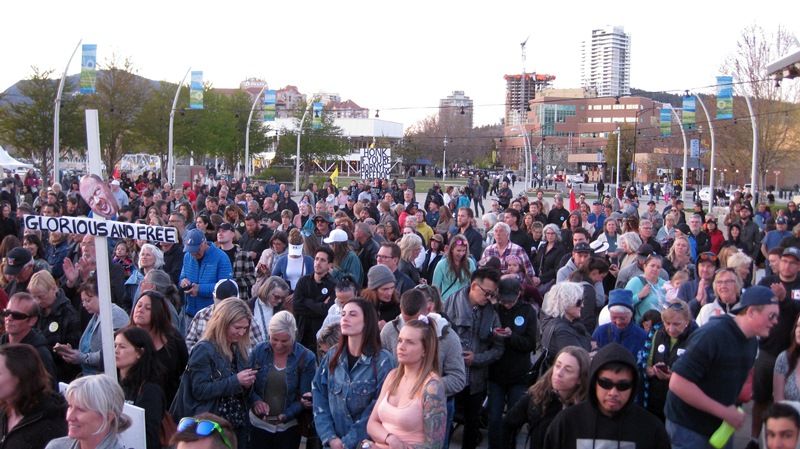 But today, BC government announced a new level of restriction, limiting people to the provincial region they live in. So I can no longer go to Vancouver (my home for the last 25 years) from here in the Okanagan. Rockblocks and borders are unheard of in Canada, even between provinces! Now, between regions? In addition, we are to remain in our communities - not traveling between small towns, or neighborhoods within larger cities.

Canada has been under a permanent state of emergency now for 15 months, with no end in sight. Never before have we had more than a few days or weeks in a state of emergency. Now, it just goes for months and years. No rights for the people, 100% power to the government, and no freedom to protest. That's tyranny by every possible definition. We live under tyranny in 2021, in "the true North strong and free". This is a demonstrable fact.

If the vaccine is our best chance against the pandemic, which is what we've been told for months and is the reason we're rushing this untested serum into billions of humans, and nearly everybody has received one, why isn't the pandemic over?

Why is there a third wave, at all, if lockdowns have been getting MORE restrictive, as the vaccine has been continuously rolled out and injected into more and more people?

Of course, we know that it DOESN'T work. These "vaccines" aren't designed to stop transmission of the virus, but only to reduce symptoms once you get infected. You will still get the virus, and you will still pass it on. We've known that from the beginning, but the mainstream media has kept most of the public from understanding that simple fact, something I have documented well on this blog. They want the masses to think the vaccine protects them from this nasty bug, which it doesn't. It just makes vaccinated people into asymptomatic "superspreaders".

And, according to one of the world's smartest men, it makes the vaccinated into mutant factories - pumping out new variants due to evolutionary pressure imposed by the vaccine strategy.

In fact it seems the best way, to collapse a healthcare system isn't a respiratory virus, it's an untested gene therapy rushed into over half the planet's population within a few months.

I'm not saying a group of people are conspiring to take over the world.

But if they were, this is definitely one way they could go about doing it. 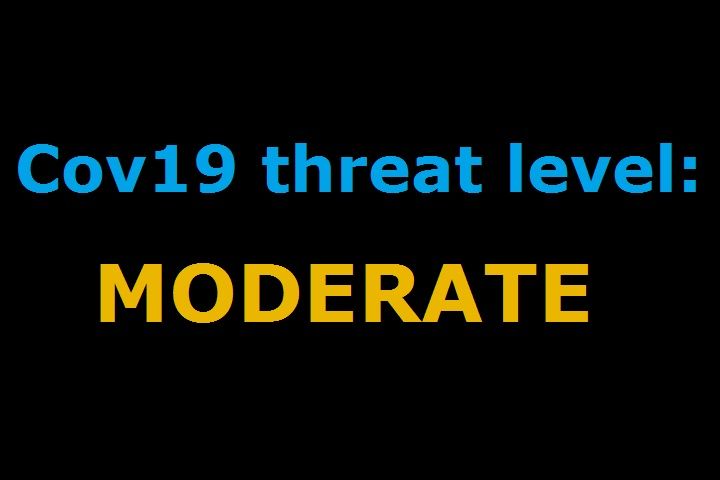 The threat from the virus was and still is: MODERATE. Not zero, not tiny, not huge. Moderate. Somewhere in the middle. I've said this from literally day 1, and everything we've seen since then confirms it.

And yet, with the magic of mainstream media propaganda, the public's level of fear can be boosted as needed. And with fear comes compliance, and the ability for the state to impose more restrictions, even if they are unwarranted by the situation. And we know that a small group of people controls the world's mainstream media.

Therefore, if that small group of people wanted to take over the world, for whatever reason, they could use their media apparatus to cause undue fear about a virus, and a state of permanent emergency, allowing restrictions not normally possible. A vaccine (that doesn't stop infection) could be pushed on the people, with skeptics labeled "hesitant" or worse. Bribes, coercion, and threats (issued by the state through the media) could be used to increase compliance. Deaths and injuries from the vaccines could be silenced so more people could be injected, faster. A digital vaccine passport could be offered to the vaccinated, allowing them part of their freedom back, and they will take it. As deaths from the vaccines - and from Covid mutations caused by overuse of vaccines - continue, the media will ramp up fear to justify even more restrictions and direct enforcement against the noncompliant.

It was never about a virus It has always been about control.

If you still need more convincing after what has happened in the past year, you're willfully ignorant and permanently comatose. Which makes you part of the problem. Your family and friends would be best to distance themselves from you now, and say their final goodbye. You're lost.

Now (right now) is the time to do something. "Later" doesn't exist anymore, unless we secure that future for ourselves. There's no more time to let the last of our power slip through our fingers. This is the moment our ancestors warned us about for generations, the one they fought and died to prevent. All lines in the sand have already been crossed. If you accept this, you'll accept ANYTHING - and here it comes. We must peacefully rise up and put a stop to these tyrants.

Very soon, they won't merely be censoring people like me, who are trying to get others to snap out of their trance. Soon you'll never hear my voice or see my words again, and the red flag of tyranny will fly right the open. To those of you who stay silent, your children already have NO FUTURE in this world, and these people intend to take even more. Don't be such a pussy! Find your courage and stand up to this evil. Where are the real men? Where are the real Canadians? Where are the real patriots? I'm not doing this for the $7 payout, you know. I'm trying to get you to WAKE UP and DO SOMETHING!

It's Liberty or death time. Choose, now, or that choice will be made for you.