Eurail is the ultimate way to travel being young not worrying aware booking ahead helps, knowing youth hostels closing times one could move quite freely planning on the go. Keeping a daily diary along with mapping each route we had taken leads me to revisiting as I write 43 years later.... After being caught on summer/winter train timetable changes, slept on a bench in Fredericia Railway Station with a railway station hall which was quite comfortable and warm. Station hall it had a miniature train, one you put a coin into and watch it go around while enjoying a warm cup of tea, that was after hunting down an electrical plug.

Travel between Denmark and Germany we had an elderly Danish couple shared the compartment, offering biscuits and coffee telling us the regions history, two German travelers boarded and they never spoke till they got off. Bewildered we questioned, were then told of the German/Danish war of 1864, made one think how much this worlds borders still carry a lot of bitterness even after hundreds of years.

There has to be something said about punctuality on the German railway system, on time all the time never be late!

Walk from the station took us over the Rhine, with super modern structured bridges, this region was a mix of old and new after WW11.

Stocked up with some food once again, content we found a place to enjoy a beer at ZAR1,15 this is cheaper than drinking a coffee or tea!

Youth hostel is a newer building, located on the Rhine close to all the wonderful city sights, walking our other mode of transport, when in doubt ask directions or use a handy city map normally located in stations, or from station shops, hop onto a tram or bus, like a bad penny, seldom get 'lost'.

15th September Düsseldorf > Köln (Cologne) > Bonn > Koblenz > Mannheim > Heidelberg. Woke up to a beautiful morning, it is Rob's birthday so we plan to get to Heidelberg via scenic Rhine Valley, then have a dinner out to celebrate. 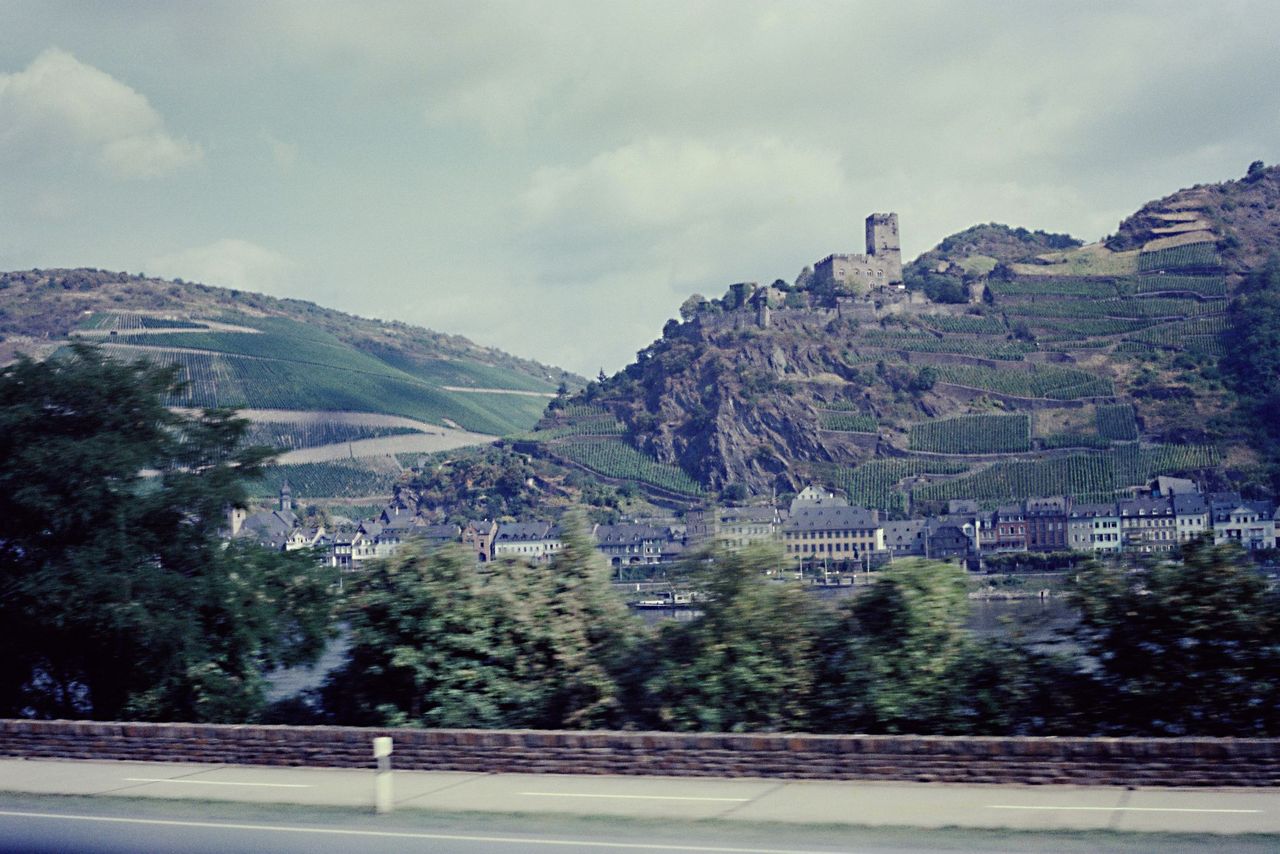 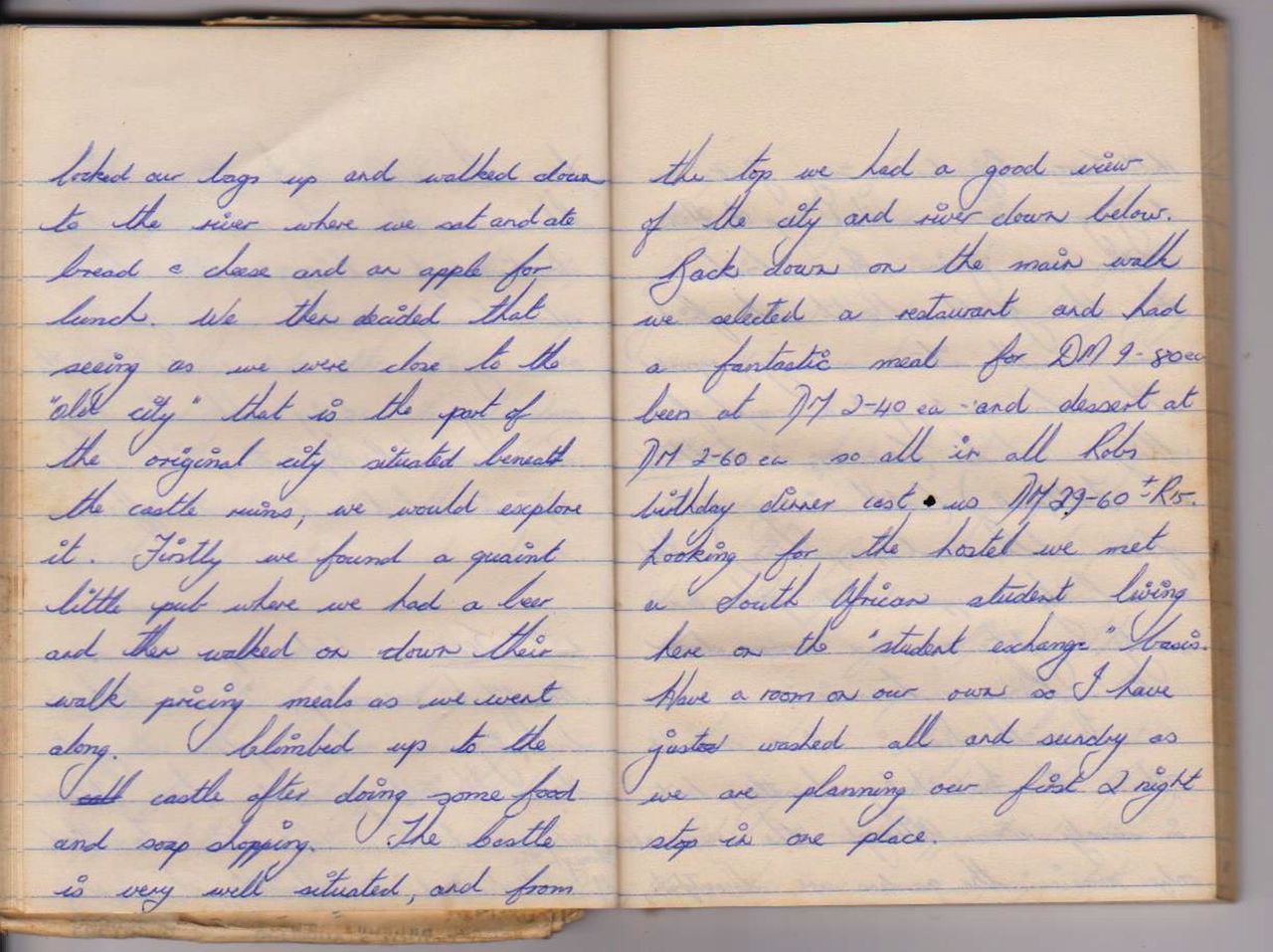 Journey took us past Köln we hopped off for a short walk to see the Cologne Cathedral, about the only building left standing which the Allieds used as a land mark but did not wish to bomb during WW11, situated right next to the station. Absolutely amazed at how this region has been rebuilt.

Train through Rhine valley scenic region slips past you giving you the opportunity to see castles up on high, with Pfalzgrafenstein Castle on Falkenau island right in the center of the river, apparently used to collect taxes from people moving goods up and down in a bygone era.

Barges floating along, vineyards, churches, homesteads in fashionable German style a wonderful way to see the countryside in the comfort of a slow train ride. 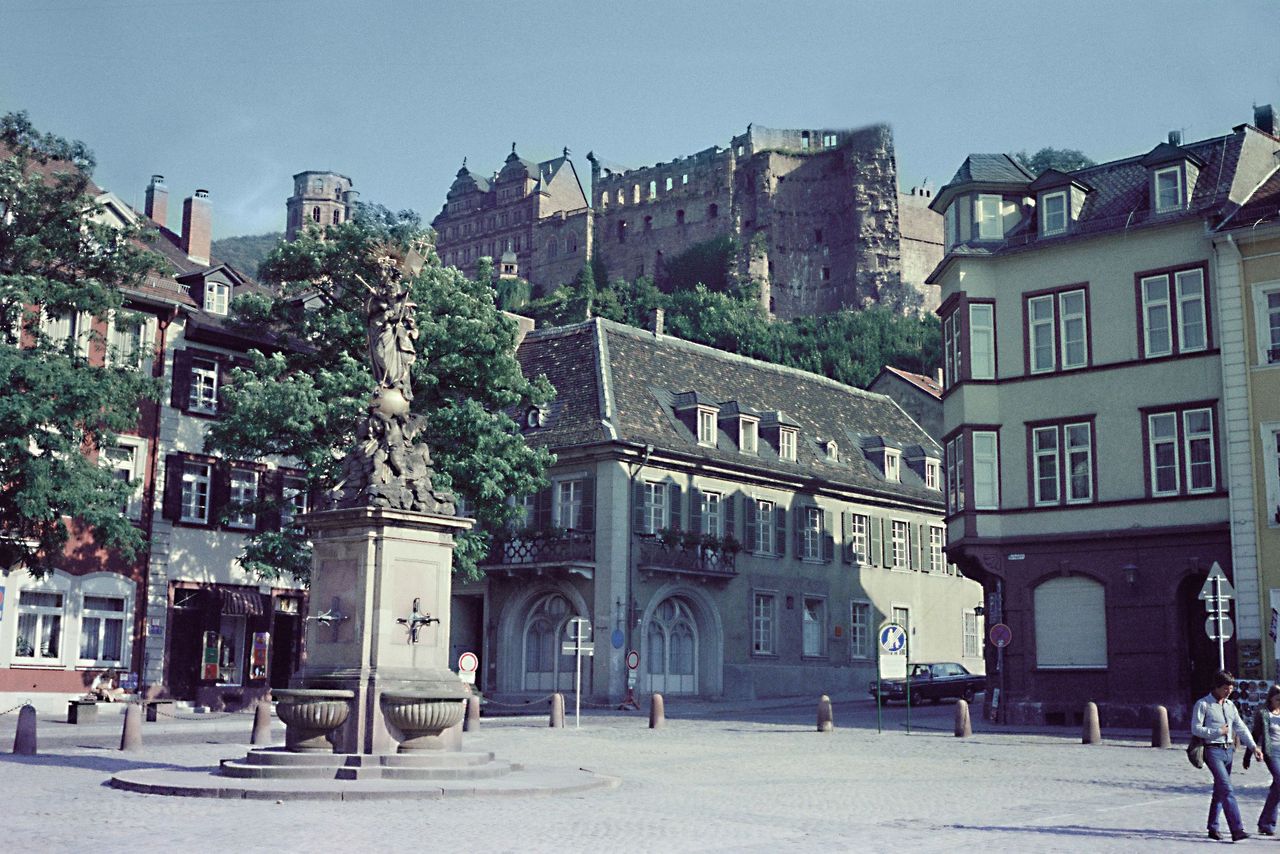 Arrived in Heidelberg at 12h45, locked our bags up and walked down to the river where we sat and ate bread and cheese with an apple for lunch. Explored old city found a pub, had a beer then walked down Hauptstraße main road through the Altstadt, seated just beneath the Schloss (castle), one mile approximately great insight as to how people lived.

16th September Our first 2 night stay in one place at Jugendherberge Heidelberg International (IYHF), we enjoyed taking it easy, hiked back up three hundred odd steps upto the castle ruins to to enjoy the beautiful gothic/renaissance gardens, remaining romantic art and ruins first mentioned in the 1300's, inspiring poets and writers for hundreds of years. 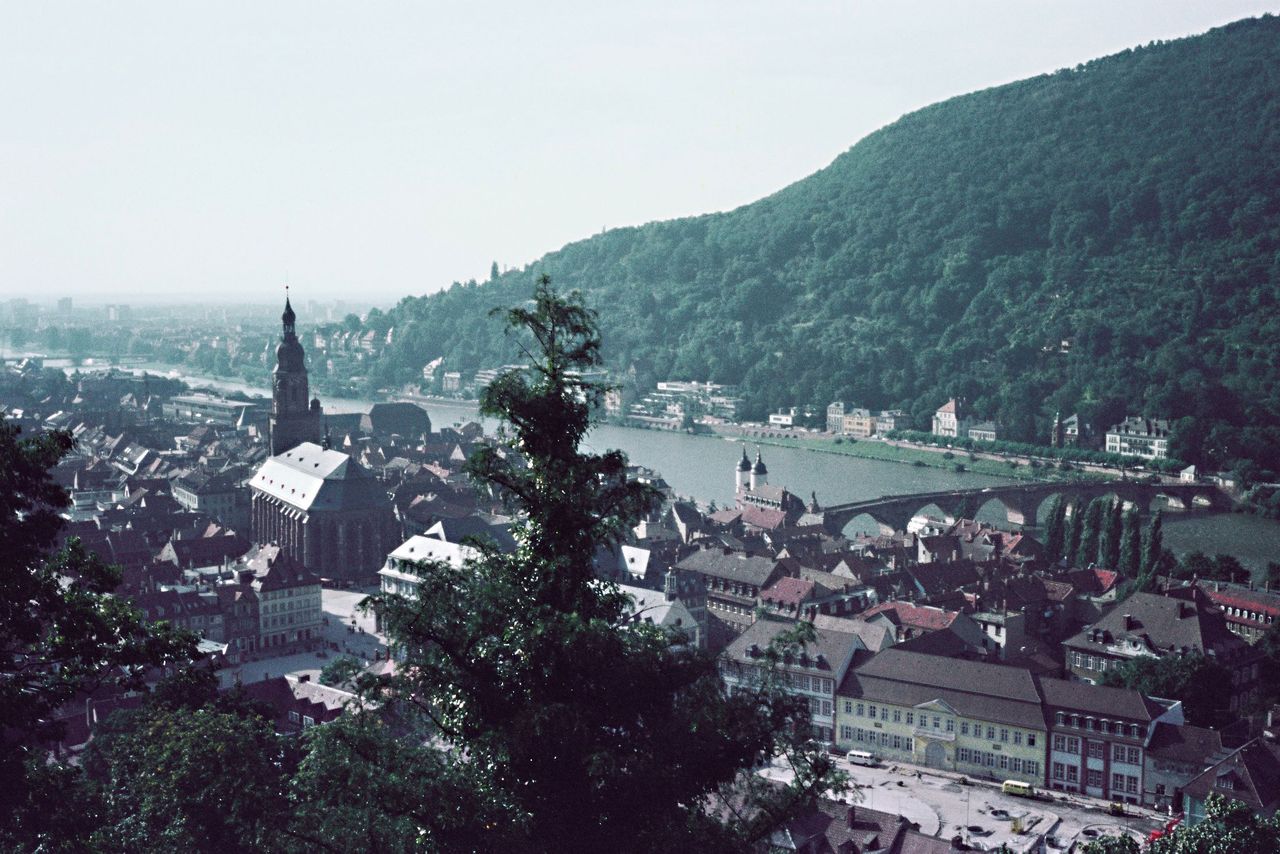 Mark Twain described the castle was "deserted, discrowned, beaten by the storms, but royal still, and beautiful".

Imagine glimpses of Baroque, multi-layered varieties of flowers, grotto's, fruit trees, a water-fountain of Neptune in the Hortus Palatinus, filled with grand statues from ancient mythology, giving feeling of a place of divine importance. One is left pondering whether in the future this will be restored to it's original grandeur or if it will be lost back into nature eventually.

Heidelberg and the River Neckar, with first stone bridge built in the region, referred to as the Old Bridge dating back to 1786 with towers on the town side. Acknowledgement to Austrian troops who helped defend the bridge against a French attack in 1799.

17th September Spent time watching barges maneuvering up and down the Neckar river reflecting the history of this region, then started making a move to catch the train to Mannheim where we were to connect for Basel. Mix up on station with trains being late we caught a train to Mainz, actually higher up from where we wanted to go! Caught a connecting train almost immediately for Basel, Switzerland, travel in hot, clear weather we caught a glimpse of the Alps from the valley floor, filled with orchards laden with fruit.

Basel situated close to Germany and France is an interesting city we never had time to explore having spent six hours still hugging the Upper Rhine Valley we decided to push on to Lucerne, another hour and a half away. My previous visit had stopped in Basel exploring sights, stopping in the Black Forest an interesting area to visit again. 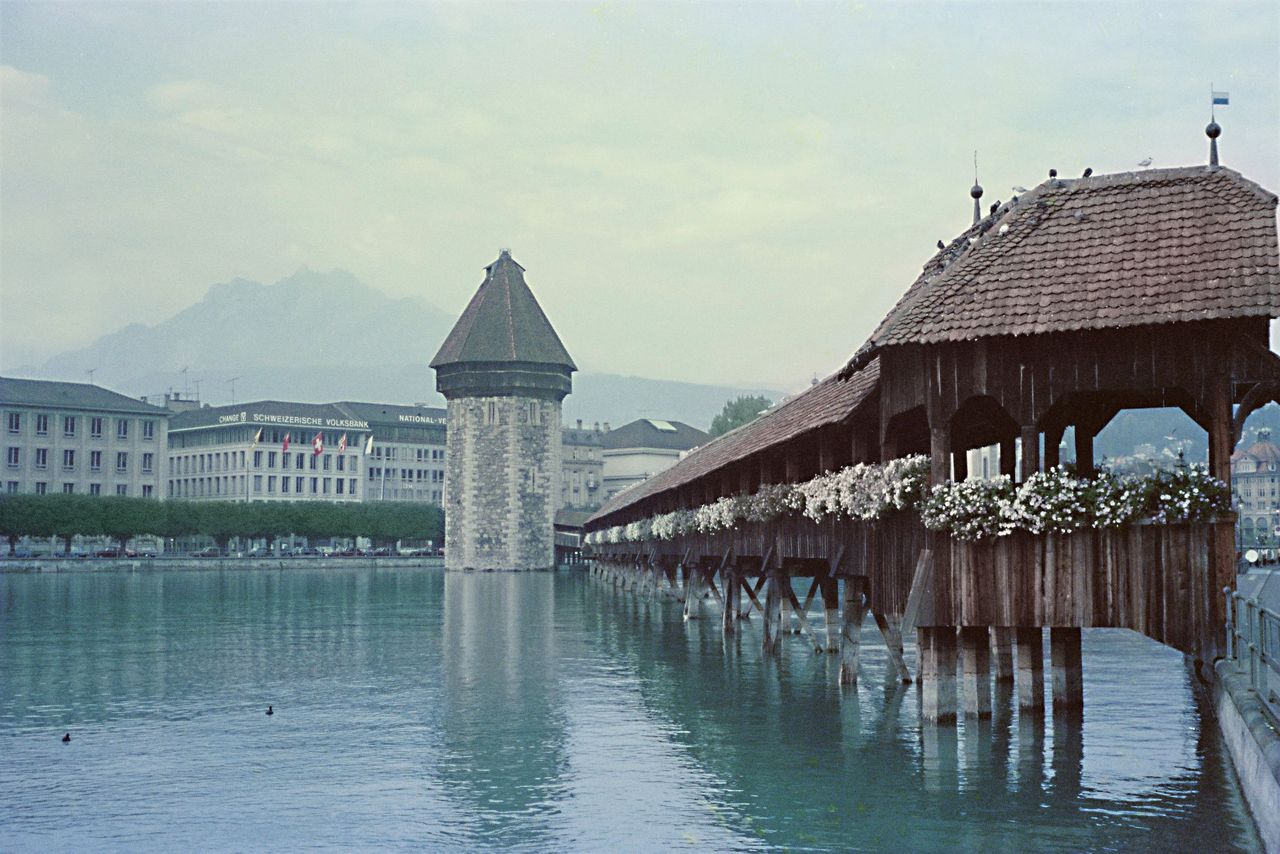 18th September Lovely night in Lucerne, good sleep, then down to the ferry at 08h30 onto Lake Lucerne on a paddle steamer, scenery, what can I say other than simply amazing! Ferry returned at 10h20, knowing we still had a short way to travel caught train, funicular, rack-line up to Engelberg. 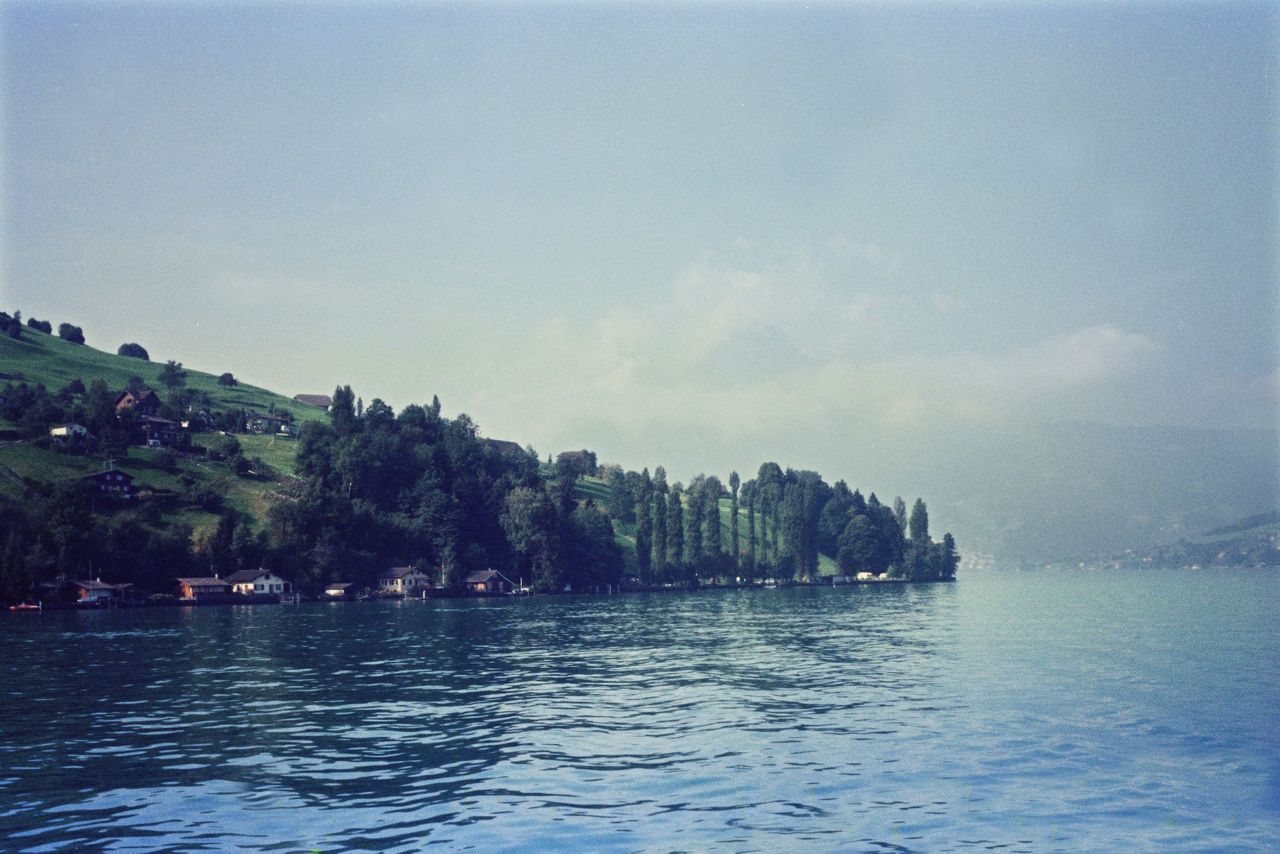 Narrow gauge rail system tackling maximum gradient of 25% on the 33.5 km line, now 43 years later reading up how they described this line since my diary notes simply had three descriptions.

In 1960 work on the Lopper tunnel started and on 27 August 1964, the last three-phase train reached Engelberg. The rack line was rebuilt to Brünigbahn standards and a new overhead line for 15 kV 16? Hz was built. On 19 December 1964, the line went back into business as the Luzern-Stans-Engelberg-Bahn (LSE). The new motor coaches were built for the same maximum speed as the contemporary Brünigbahn motive power (75 km/h or 47 mph). Source

Yes I have always had a love for train travel plus an interest in trains.... 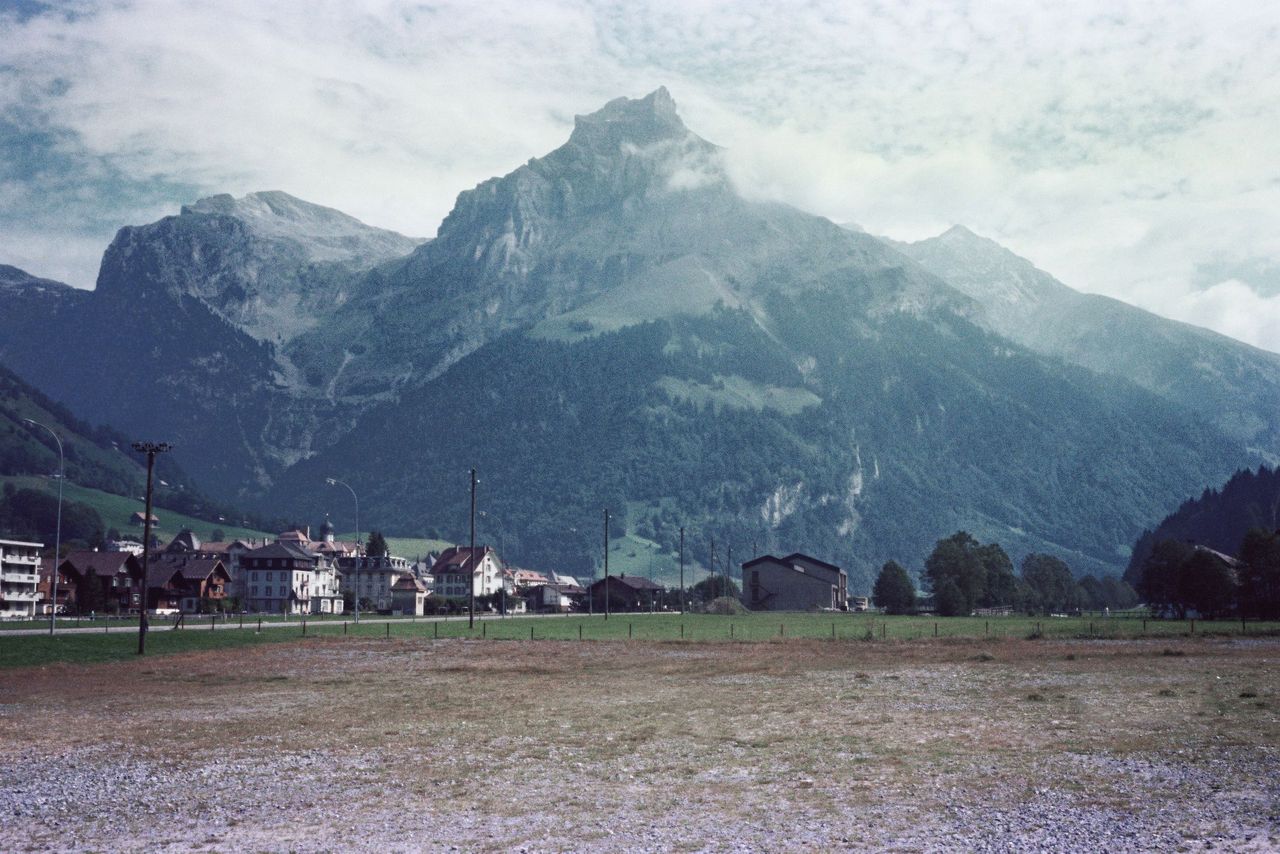 Booked into the Engelberg Hostel, after a wonderful day travel by cable cars up Mount Titlis, visiting the ice cave and seeing our first glacier (perhaps the last we will see). First stop was a cup of hot soup, marveling at the scenery, partially cloudy otherwise breathtakingly beautiful. 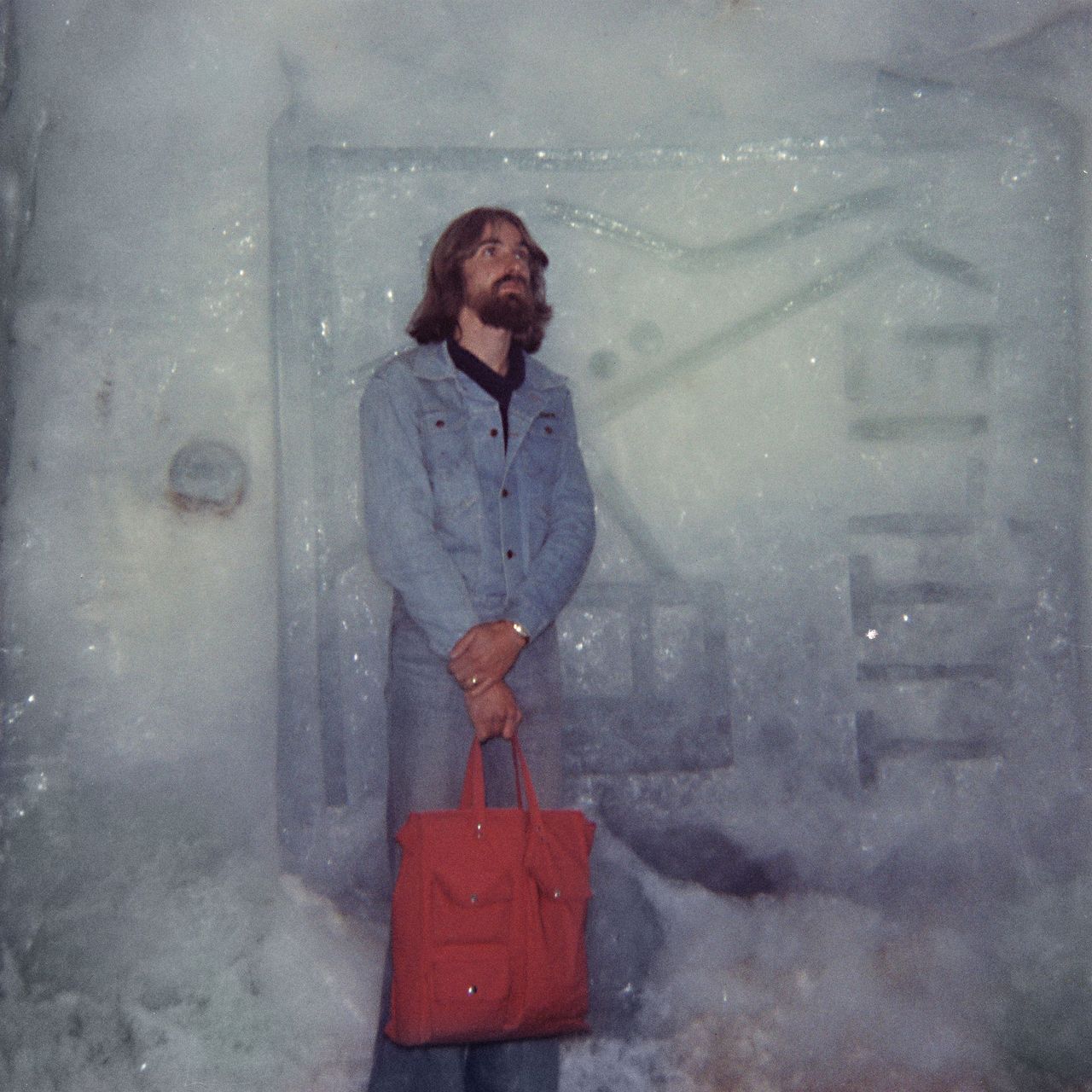 Peek Through The Clouds

Luck was on our side, after visiting the snow cave, kidding around about trying to ski, as we started the descent the cloud lifted from the valley for a short while a wonderful glimpse in all directions only to close up completely once again. Peek Through The Clouds

Hostel was comfortable, with a grumpy couple running it being told we had to leave straight after breakfast the next morning. Source

19th September From Engelberg we retraced our route back down to Lucerne onto Zürich, had to get off in a smaller town just outside of Zurich HB as train was running late, train conductor arranged for passengers catching Trans Europe Express to Innsbruck to disembark where TEE stopped for us. Very much doubt things like this would be done today, or taken into consideration!

Onto the most scenic train routes Transalpine, Arlberg Pass between Zurich and Innsbruck. Our route on map, Zug, Buchs SG, Langen am Arlberg, St. Anton am Arlberg, Innsbruck. A total of about six hours train ride with spectacular views.

Mountains kept coming, alongside the Zürichsee, then along the Walensee. soft mountain pastures lower down with delightful churches and homes dotted throughout the valley, castles built up beside the mountain walls, truly Sound of Music scenery taking this stretch of line.

Arrived in Innsbruck at 15h00, had a wurst (sausage) and beer for lunch, did some exploring of the old town and headed for the hostel. First hostel temporarily closed for renovation, second also closed up for winter months, third time lucky, what incredible accommodation!

Tiroler Jugendherbergswerk Youth Hostel was built for the 1976 Winter Olympic Games, with brilliant views across the Inn River up to the mountains, close walking distance to most everything. Two night sleep over planned here before moving again.

20th September Decided not to go to Zell-am-See we are starting to run out of time, spent the morning in the grounds of the Ambras Castle (castle was closed to visitors), ambled around gorgeous Renaissance gardens, lovely view of town below surrounded by wooded area, time to soak in nature. 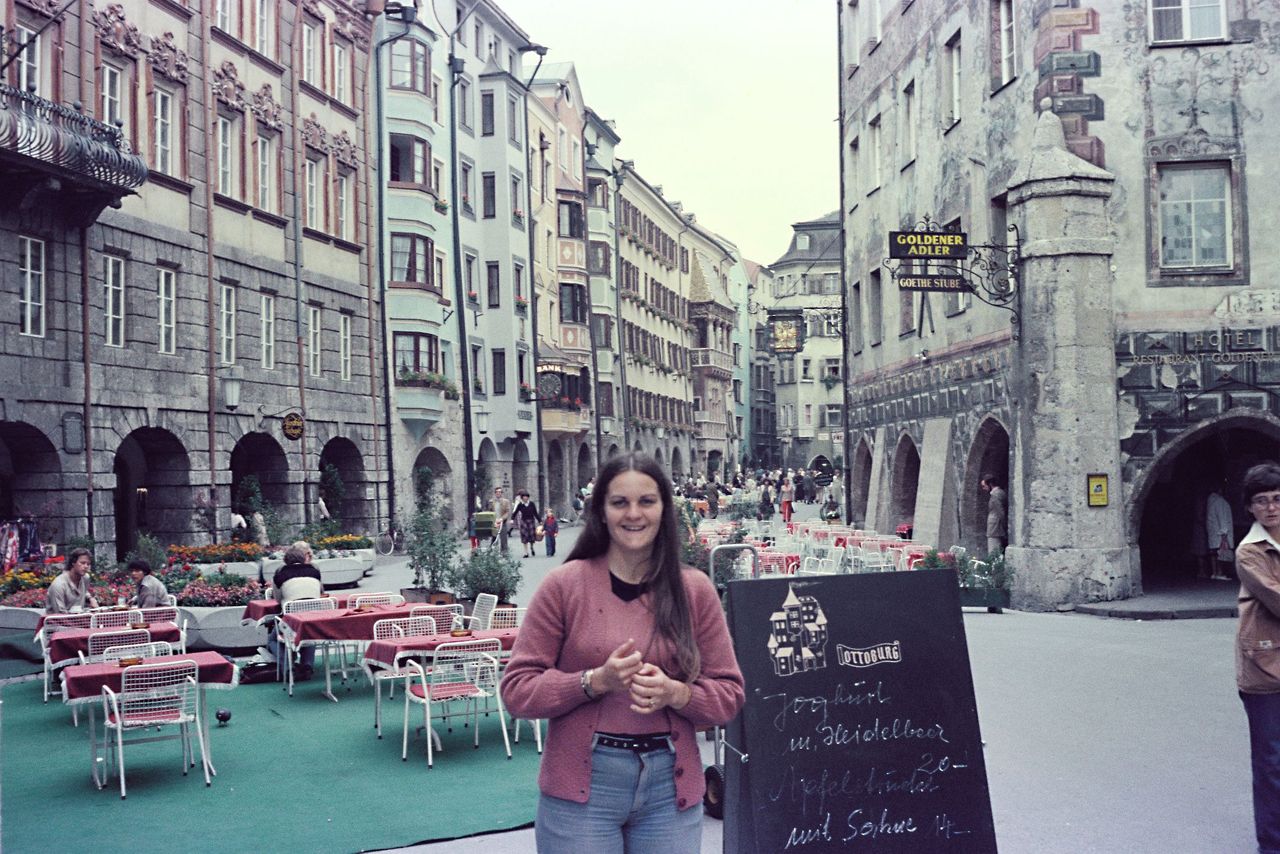 Returned to old sector of town to explore, around 14h00 the cloud left the mountain completely so we took a trip to the top. Chilling -3 deg C up there we walked along footpaths, this then called for thick soup with sausage absolutely delicious at the Seegrube Restaurant with panoramic views. 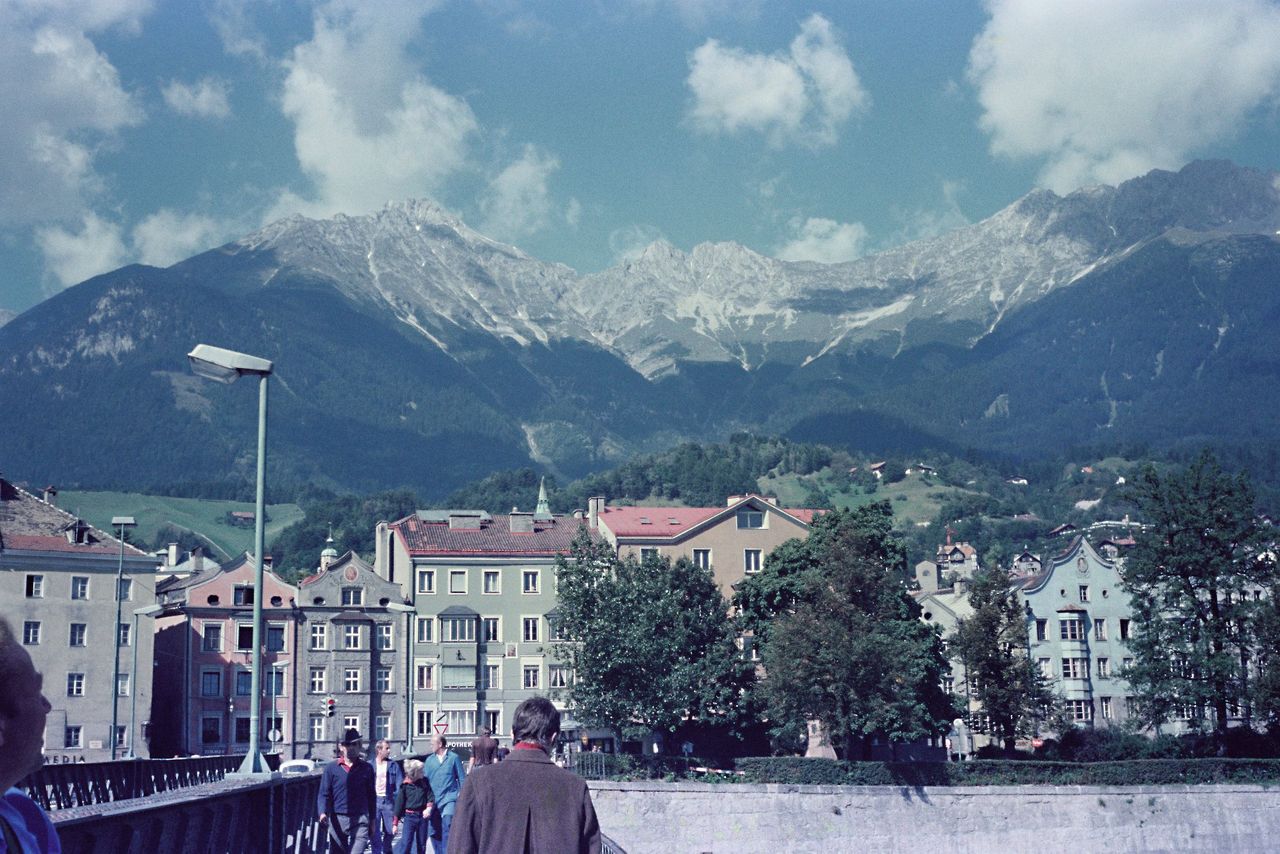 Innsbruck Austria From Below 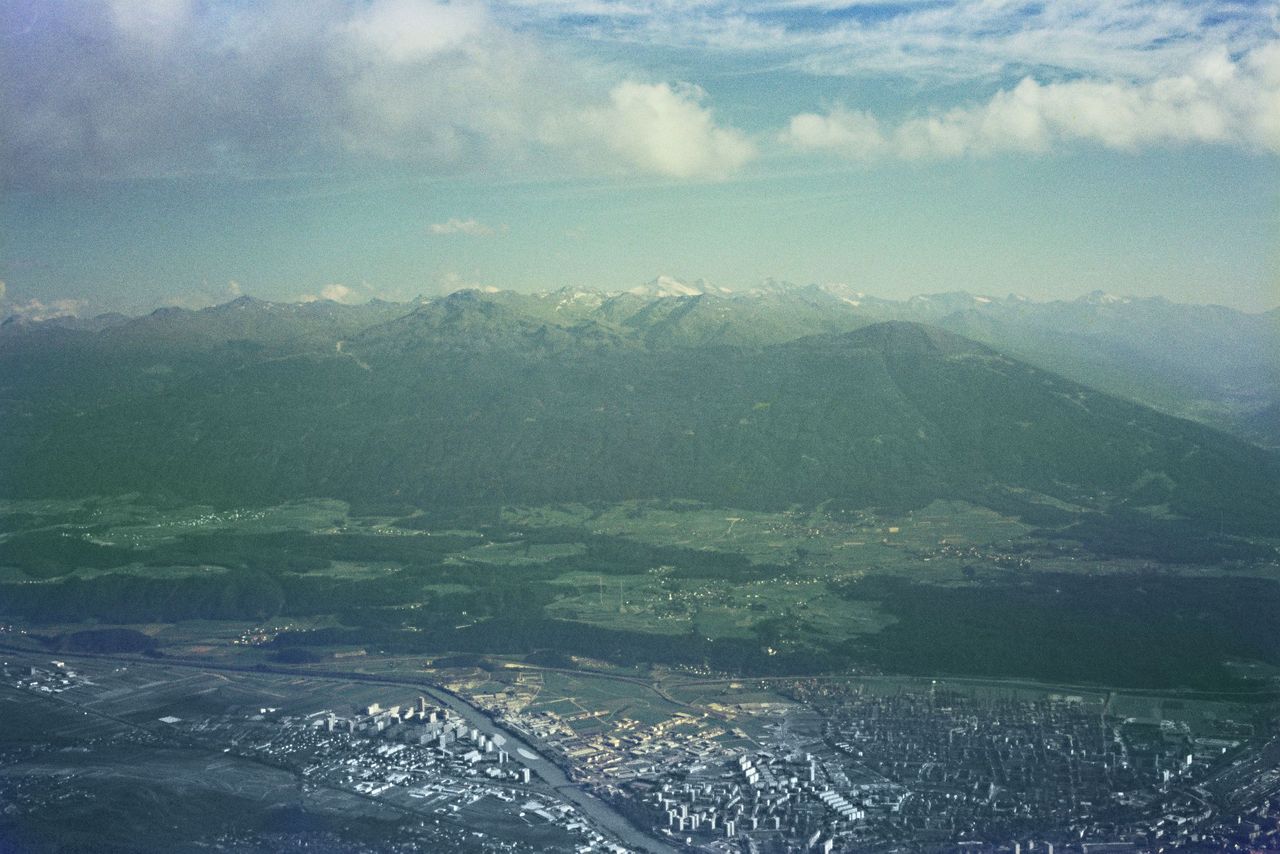 Innsbruck Austria From Above 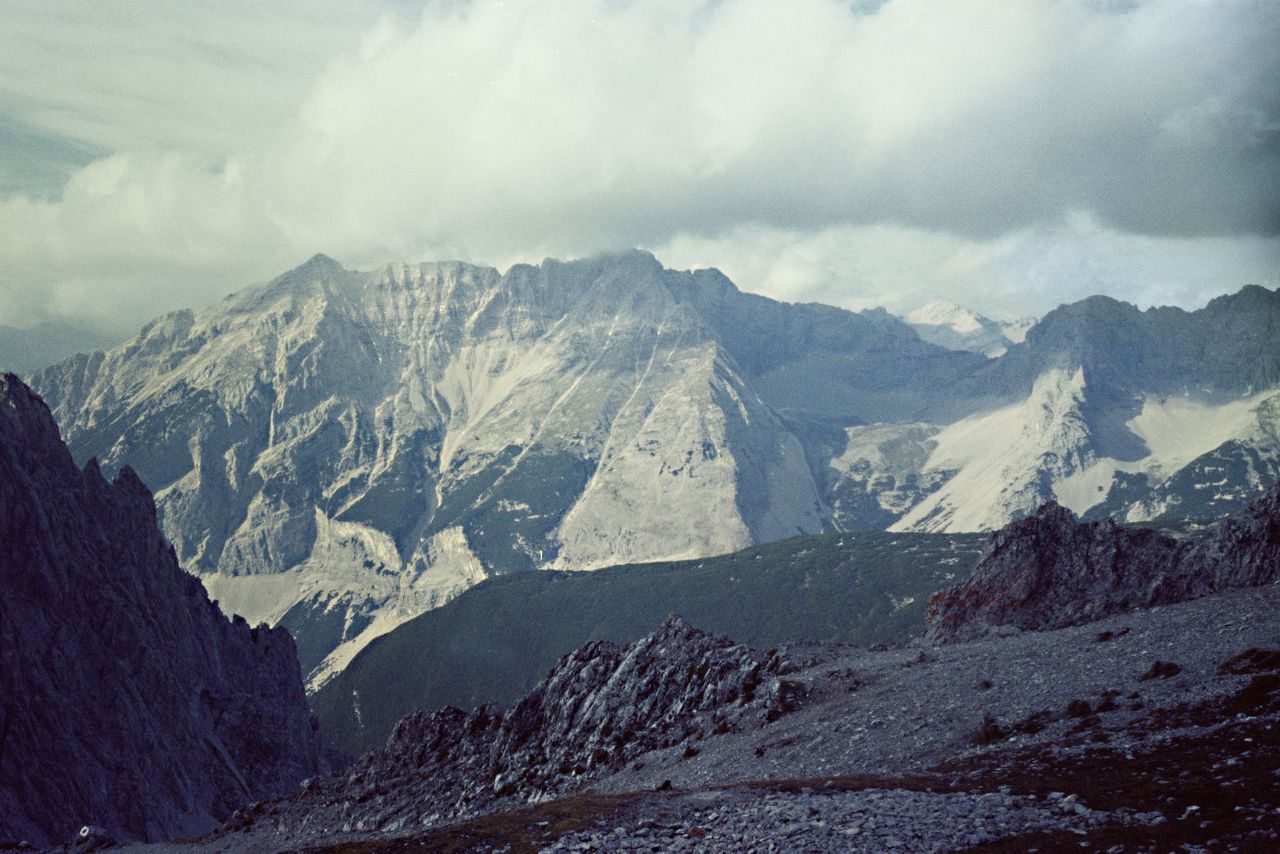 Top Of The World - Innsbruck Austria

The state-of-the-art Hungerburgbahn funicular railway whisks visitors in just a few minutes from Innsbruck's medieval old town up to the Hungerburg area of the city at the foot of the Nordkette mountains. From there the journey continues with the cable car all the way up to the Seegrube at 1,905 metres above sea level. Perched high in the mountains, this plateau high in the mountains is a popular destination for hikers, mountain bikers, rock climbers and day-trippers. The Perspektivenweg hiking trail also starts here. Those who want to head even higher can take the Hafelekar cable car all the way up to 2,556 metres. Here, at the top of the Nordkette mountains, visitors can look forward to breathtaking views of the regional capital Innsbruck and the Alpenpark Karwendel, Austria's largest nature park. Source Everything was so different to what we knew, seeing an olympic ski jump, Alps scenery, castles, bridges, snow tunnels, plus meeting people from all over the world in Youth Hostels chatting about their lifestyle. Arrived back at hostel at 18h00 then went out to find a place to enjoy supper (Austria is cheaper than Switzerland, just as beautiful with a slightly wilder untouched landscape), Walked down to station to book train for trip down to Venice tomorrow.

Next part of journey we travel to Italy on the next leg of the trip.

Photographs originally from film camera, converted in early 2000's to digital so please excuse the age, memories are wrapped up here!

Thought for Today: "Travel and you will see them, sit and they will come to you." - African Proverb