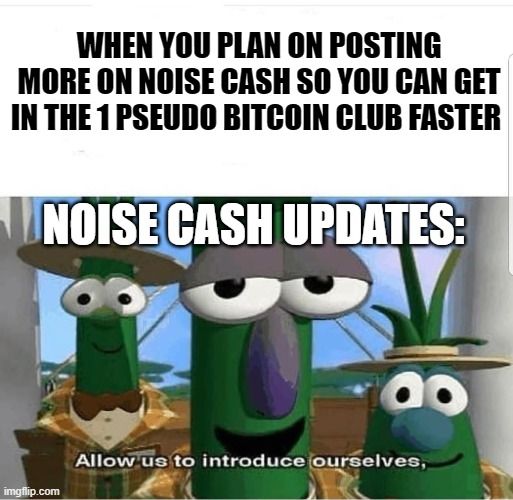 Noise cash is like that psycho girl you like to hang out with even though you know she's mentally unstable, but she's hot so you try to downplay the crazy because of the "benefits". Every time you think to yourself that things are settling down and the relationship might actually work, she goes full mental and you are reminded that some things are not meant to last forever.

We all like freebies, even though in the case of noise cash we're talking about a bitcoin sort of clone that some like to pretend it's the real deal, but still, it's free monies and I have grown accustomed to the crazy part. Speaking of things that don't last: in their latest update they managed to make the tipping system even more opaque and user unfriendly by not telling the user how much they have tipped and not notifying the beneficiary in any way. It's obvious that this is a measure to encourage people to tip from their own wallets and not rely so much on the daily BCH fund which the users distribute via tipping.

For your average Joe putting in the effort to tip people has almost no feedback now and it's easier just to write your post and not bother with the tipping part. And in my case at least it shows because the amount I receive on a daily basis has dropped down to about half what it used to be ( less than $0.5). So there go my dreams of reaching 1 BCH in the next decade.

I've always said that I'm enjoying the free money from noise cash while it last and it seems like the good days might be coming to an end.