Hello Hivers, I’m Andrew Levine, the CEO of OpenOrchard and I am excited to announce first on Hive that on October 13th we will be releasing a brand new cryptocurrency named KOIN onto the Ethereum network that you will be able to mine using just the CPU in a regular computer. If you would like to skip directly to the mining application download, you can find that here. We have also released a whitepaper that you can find at koinos.io. This whitepaper is only for the framework. We will be releasing more technical documentation leading up to the release of mainnet, so be sure to follow us on social media and join our mailing list by going to koinos.io. 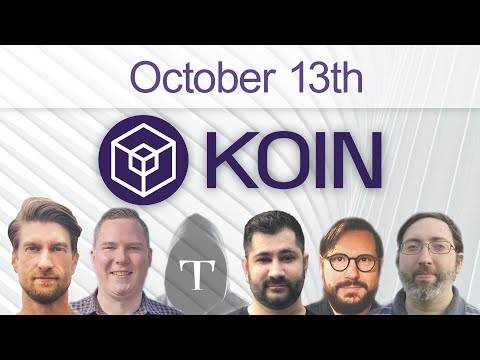 The mining period will last for 6 months at which point we will launch the Koinos mainnet which will airdrop tokens based entirely on the Ethereum mining. There will be no ICO because our goal is to distribute the tokens as widely as possible so as to maximize decentralization.

We genuinely believe that Koinos could usher in a new era of decentralized computing that will empower everyone through digital self ownership and we want as many people as possible to have a stake in that future. That’s why we’re launching the token on Ethereum, the blockchain with the most active users and why we put a lot of work into ensuring that the mining algorithm is both memory-hard and GPU resistant so anyone with a decent CPU can acquire KOIN through mining without having to compete with massive GPU mining rigs or ASICs.

That’s also why we’re providing a desktop mining program with an intuitive graphical user interface that will make it easy for ordinary people to participate in the mining process. You can find that here. There is a version for every operating system, unfortunately you do have to fund the miner with ETH in order to pay the transaction fees, but well, that’s what happens when you don’t have a fee-less blockchain which segues nicely into why you should mine KOIN in the first place. Why will people want to use this new blockchain when there are already so many others?

Engineering Koinos is a group of battle-hardened blockchain developers with unrivaled experience as core developers and architects of the Bitshares and Steem blockchains, two of the most used blockchains ever. Of course, most of you are no doubt aware that Hive is a fork of Steem. It was through our first hand experience working with some of the most performant blockchains, and their shortcomings, that we learned about the most serious problems facing the mass adoption of this technology.

Our mission is to empower people through ownership of their digital selves and blockchain is the most promising technology for accomplishing this mission. Blockchain-based applications can add value to people’s lives in an infinite variety of ways but building such applications is far too difficult, time consuming, and expensive.

In order to accomplish our mission we need to dramatically expand the quantity of blockchain powered applications and end-users, which is why we are building a brand new blockchain from the ground up to make it fast, easy, and affordable to build blockchain-based applications that are capable of delighting users.

When it launches the Koinos mainnet will be a fast and fee-less blockchain that enables developers to create an unlimited number of free accounts for their users. With these features, Koinos won’t just lower the barriers to entry, it will obliterate them and open up blockchain applications to an order of magnitude more users.

Thanks to these features, Koinos will deliver an unparalleled experience to both developers and their users, but that won’t launch for another 6 months, so what have we been doing up until now?

We have built a brand new, high performance, vertically scalable, blockchain framework which can acquire any feature through smart contract modules running in the virtual machine. Because these smart contracts can be upgraded in-band, hardfork-like behavior change does not force a coordinated software upgrade on all users. This new capability that we call “modular upgradeability” resolves one of the biggest challenges facing existing blockchains: The difficulty and disruption of hardfork upgrades.

Modular upgradeability enables us to rapidly add different features to the framework without impacting any other part of the blockchain. This is how we will be able to offer a testnet in just 3 months that delivers Ethereum feature parity, but with WASM smart contracts, fast block times, and fee-less transactions. While the testnet will feature proof of work, the Koinos blockchain framework makes it easy for us to swap that consensus algorithm out for the totally new and different algorithm that we’re developing for mainnet.

Thanks to modular upgradeability, individual upgrades can be pushed to the network much like an operating system patch but with an on-chain record of the entire path that the upgrade took. Instead of having to package critical upgrades into time consuming, political, and risky hardforks, individual fixes can be pushed to the network the moment they are ready enabling Koinos to rapidly improve itself. It is that capability that we believe makes Koinos the first blockchain in history capable of evolving.

After upgradeability, the next major challenge facing existing blockchains is scalability. Blockchains hold on to every transaction and smart contract that has ever been added to them, regardless of whether they get used or not. That means that the cost of lugging around all of this expensive data gets baked into the cost of every new transaction which itself adds even more information to the chain. All of this old and unused data is responsible for the vast majority of the cost of running a blockchain. But what if we could remove all of that data, while retaining the ability to bring it back to life as if it had never left like MAGIC?

Well we have figured out how to do exactly that. We call it state-paging and Koinos will be the first blockchain ever to have it. Not only is this a genuine innovation that could be THE key to scaling blockchain to the masses, but existing blockchains like EOS and Ethereum cannot take advantage of this capability without totally rearchitecting their entire blockchain.

State-paging highly innovative but it is also highly experimental. All of the algorithms have been written and tested. We know we can page data out and back in without any loss in trustlessnes. State-paging works. What we’re not 100% sure about, is how much the memory savings will outweigh additional bandwidth consumption. But that’s mainly because we don’t know how people will use Koinos. In our tests we found that were state-paging a part of existing blockchains, state size could be decreased by as much as 78% and that number would only increase as the blockchain got older. If we see similar numbers on Koinos, then state-paging will be a game-changer.

It’s just very important to us that we be upfront about what we have already developed, what we know we can develop but haven’t yet, and what we just don’t know yet. What we believe very much, is that Koinos will be our best attempt to resolve the major issues holding back blockchain adoption and denying people the empowerment that will come from owning and controlling their digital selves. If this sounds like something that you want to be a part of, then we invite you to join us by firing up those miners.

Lastly, we really want to make sure that you receive important information about Koinos like how to claim your tokens when mainnet launches, so please join our mailing list by going to koinos.io or openorchard.io.

P.S. If you have any questions about how to use the GUI miner, you can find answers here