A week ago I wrote a strategy, where I highlighted the importance of "Speed" in a battle, which was quite successful and where several players also agreed with me, since, only with speed we can greatly increase our probability of obtaining a victory in the game, so that, in this way, the difference between the battles won and lost, were at least above 60%.

With this in mind, in this opportunity I will detail a strategy where speed was again determinant for my victory, but focusing on a specific card that I usually use as a tank in my powerful "Water Splinter" called "Kelp Initiate", a very useful card, with an impressive speed that makes it almost untouchable for monsters with common speeds of +3 points down.

Before continuing with my lineup and strategy, I will detail what the "Kelp Initiate" card is and its incredible utility on the battlefield, as I think it is a card worth highlighting because of its versatility and comfort to use. 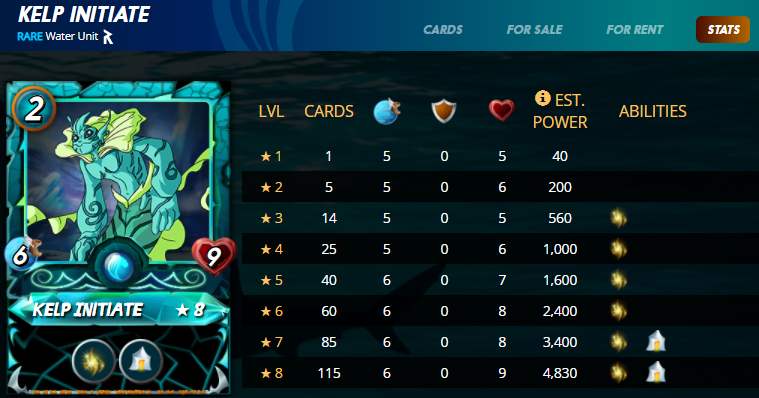 Kelp Initiate is a "Rare" card of the "Rewards" edition with the frame of the last edition called "Untamed", this is a very accessible card in terms of summoning to the field, having only +2 mana points to summon it, however, it is a card that can play multiple positions, since its support abilities, allow it to support all its team, to heal the negative effects on it and additionally regenerate the life points of the cards that are close to it and that have the highest battle damage.

In addition to this, it can also serve as a "Battle Tank", since its amount of vital points and its great "Speed", allow it to relatively easily dodge melee and ranged attacks, a utility that I used in this specific battle to take the first position and protect the rest of my cards, which it did perfectly.

Now, the skills that this monster obtains throughout its 8 levels are the following:

I hope this card is very useful and you have learned a little of it, because it is great and very versatile, being able to defend us and additionally fulfill an important role as "Support".

On the other hand, I summoned to the field a card that becomes essential in every battle, this is nothing more and nothing less than my "Merdaali Guardian", which has an impressive healing capacity, taking into account that it repairs the shield of my cards with the ability "Repair", of course the one that has suffered the most damage in the battle and additionally supports my tank, with its ability of "Tank heal", regenerating its life points in each turn. Finally, I place an "Offensive" and "Support" card, with the "Triage" ability, in order to recover the life points of my cards that have suffered the most damage in the battle. 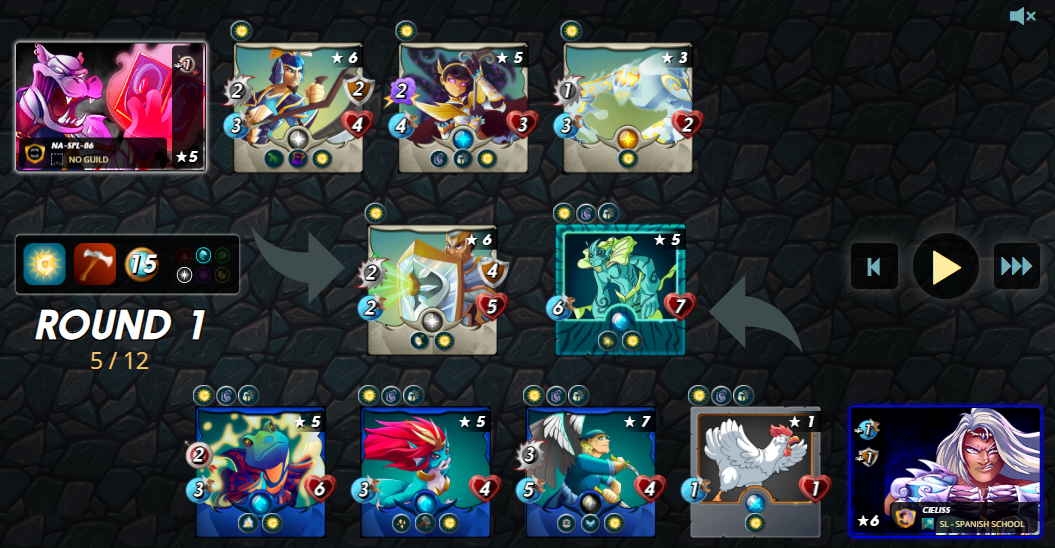 Link to my Battle🏆

Rules of my Battle This is an incredible summoner, which focuses on raising the shield points and speed of my cards by +1 point, an essential creature to play battles with a very good defense and an impressive speed, I could say that, "Kelya Frendul" is one of the summoners that focus on both attack and defense at the same time and thanks to its particular abilities, my alignment in this strategy, I could have a great boost thanks to it, since my "Kelp Initiate", had a great increase in its speed, taking my card up to the incredible figure of +7 points of speed. Kelp Initiate, the main card of this battle, which has incredible abilities, being able to serve as a tank and support at the same time, as it has a very good amount of life points, adding to its great speed of +7 points, which makes it almost untouchable. On the other hand, thanks to its ability called Cleanse, it automatically removes the negative effect caused by our opponent. In short, this is the most important monster in my lineup. This great card is one of the best I have in my deck, which is really key to win some battles, as it focuses on getting more time, something we need to give an extra chance to our cards to survive one more turn, all this in order to keep attacking and carrying out their mission in it. I use it very often. The most powerful card of all my alienation, focused on a very fast and lethal sneak attack against my opponent. This card has impressive stats at level 7, which is where I have it, which is focused on attacking the last card of the formation of our opponent, having an impressive +3 melee attack points, +6 points of speed and the ability to "Fly", which gives it a very good defense, capable of dodging several attacks from my opponent if it were placed sneak attacks in his formation. I don't have to say that this card is really awesome, the only card in the whole game that has in itself the ability to "Repair and Tank Heal", saving me one more spot in my lineup and giving me incredible support. His goal in this formation, of course, is to protect all my cards, giving him enough stamina to give the offensive cards a chance to attack and win. This is a card that I recently acquired, as it gives me protection and at the same time a moderate offensive capable of supporting my tank in the first position. Its purpose on the battlefield is to provide more protection thanks to its "Triage" ability, which I have already explained above, and also to support in the attack thanks to its +2 ranged attack points.

My strategy was balanced and supported in every way with my summoner "Kelya Frendul", since, the fact that he gave me both speed and shield, is an advantage, since it increased my defense and attack at the same time. Contrary to my opponent, since his battle formation did not have "Swing", he could not rely on his summoner, the "General Sloan" which, focuses on increasing by +1 point the ranged attack.

I say he did not rely on it because the cards he played were only melee attack type cards and only one dangerous card with magic attack, but it had no effect, since his attack points were only +2 points, being this the only card capable of damaging me "Kelp Initiative". This is something I want you to learn, because it is useless to play a summoner that does not have any confluence with the cards we play, this makes us have a very big disadvantage and we just leave the game to luck.

I hope you liked this strategy and that it will help you to make excellent combos to increase your winning rate.

¡I invite everyone to join Splinterlands, the best game based on chains of blocks, full of adventures, battles, and strategies where you will have fun and get rewards according to your league!