With sides around them faltering, GT took a giant step towards a playoff place over the weekend by extending their winning streak to 5 in a row against RCB.

It was once again their powerful middle order that got the job done under pressure and today's opponents PBKS need no reminder about how good the Gujarat batsmen are when the heat is on following a last ball 6 to win when these 2 teams met earlier in the season.

That match could also lay claim to having witnessed the 'Bonehead play of the season' (I don't know why IPL can't find a sponsor for that particular achievement) from Odean Smith when he attempted a needless run out in the final over. In fact Smith's cricket epitomises PBKS' approach to the tournament as a whole with lots of brawn and not very in the way of brains.

PBKS' hit and hope method is in contrast to Gujarat who alongside the other sides that have performed well so far in IPL 2022, have generally adopted a much more conservative approach at the top of the order with the aim of keeping wickets for later on.

least wickets lost in the powerplay during IPL 2022

There are still question marks over the form of Shubman Gill and who'll bat at number 3 for GT but they aren't letting that impact where their strength lies which at the moment is in the form and power of their middle and lower order.

By contrast PBKS don't look like a side where anyone really has a defined role except perhaps Shikhar Dhawan (see last blog on PBKS) and instead are a group of individuals who are hoping that one or two of their players perform in order to secure victory.

In recent matches at the DY Patil Stadium, sides batting first have struggled to put together a match winning score with 4 of the last 5 games seeing the side batting first post sub-160 totals. Only Gujarat Titans have managed to defend that total within those games and that came against a KKR side who are hardly a good yard stick to measure batting success against.

As the stats above suggest, a score of 170 is par on this pitch and anything over 180 is likely to be a difficult chase! PBKS did manage to overhaul RCB's 205 at this ground but that was in the very first match of the season at the DY Patil and since then the wickets have gotten drier and slower making the chances of a repeat slim.

GT will be looking at this fixture and then their next against bottom side Mumbai Indians as a chance to not only secure a playoff place but all but guarantee themselves one of the coveted top 2 positions and an easier route through to the final.

PBKS have this game and then another tough fixture against Rajasthan this week before they play 3 crunch matches against the 3 teams immediately above them in the table (RCB, DC and SRH). They must win at least 1 of their games this week to stand a realistic chance of sneaking a playoff place.

GT vs PBKS head to head

In previous matches at the DY Patil, GT have been indebted to the calming influence of their captain Hardik Pandya whose promotion up the order has been a masterstroke for the new franchise. As noted above, runs on the board will be key to deciding the outcome of this match and Pandya has shown an appetite to get the job done so far this season. 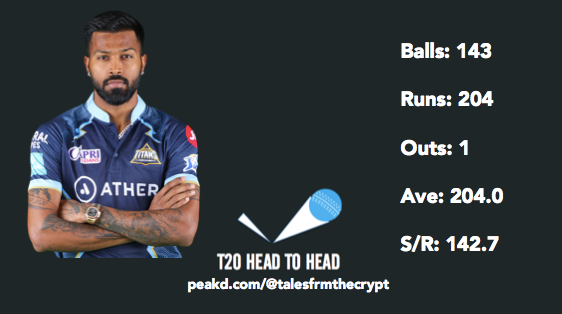 Pandya's good record at the DY Patil is in contrast to the likes of Shubman Gill who has managed just 27 runs in 3 innings on this track and 80 runs in total over his previous 6 games.

In this match Gill will also have to overcome an inform Kagiso Rabada who has started to pick-up wickets and has a good head to head record against Gujarat's struggling opener. 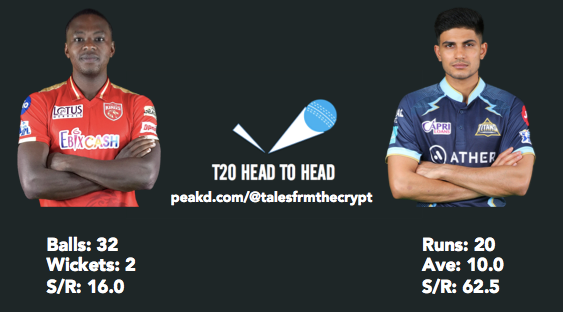 Meanwhile Punjab's attack have found taking wickets at the DY Patil a challenge with just 5 scalps between them in the 2 previous matches they've played here and 3 of those went to the wrist spin of Rahul Chahar.

If they can't take regular wickets through the innings then they face a tough task in resisting this powerful Gujarat middle and lower order who have the second best run-rate during the last 5 overs of all teams in IPL 2022.

Run-rate by team during the death overs IPL 2022

Gujarat seem spoiled for choice in regards their fast bowling options. Ferguson, Mohammed Shami and Joseph can all generate some serious heat while their decision to recall Sangwan for his first IPL start in 4 years proved a masterstroke and Yash Dayal has also picked up key wickets too. It seems like everything they touch at the moment turns to gold!

Lockie Ferguson has been a little bit hit and miss in this season's IPL but Pandya might opt to use him earlier than normal in this match purely because of his head to head against PBKS' linchpin Shikhar Dhawan. 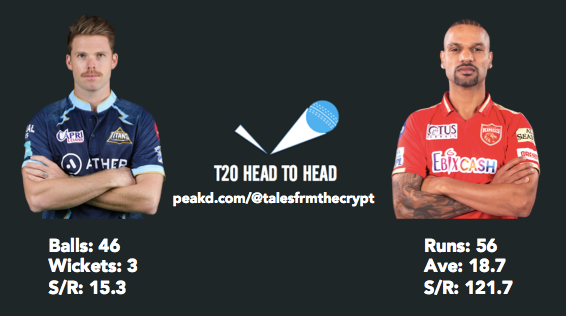 In our head to head analysis of these 2 teams last meeting I highlighted a match-up between Rashid Khan and Liam Livingstone with the Afghan spinner having got the better of the Englishman on 4 occasions at an average of 21.5, although the big hitting right hander does strike at over 165 against Rashid so expect some fireworks in that clash.

Equally, Gujarat might be tempted to throw Rahul Tewatia into the mix given his head to head against Jonny Bairstow. Better known now for his exploits with the bat, Tewatia was Rajasthan's primary spin option in last season's IPL taking 8 wickets from 37 overs. In this season's IPL he's bowled just 5 overs and is currently going at an economy of 13. It'd be a calculated gamble to chuck him the ball again here today!

All stats used in this blog are from my own database. Images are my own with the exception of player profiles and background images which are used under a creative commons license or otherwise royalty free