HAPPY ARE THE CHELSEA FANS FOR WINNING AGAIN

If you are a Chelsea fan, you know a victory is near. I was hoping for a great 90 minutes where Tottenham will hold Chelsea half court and somehow win the game. No Lukaku today, no Havertz also to save Chelsea. No Mount to score the only goal to win the game.

The defense came out strong in the first half by defending everything to scoring goals in the second half. I can understand Kanté scoring goal for Chelsea since he is right behind the offensive line. What a shoot that got flip and hit the pole for the goal. It shows Tottenham was playing with bad luck all over.

Thiago header to loosening up the game shows how well prepared Chelsea come to play. Still Chelsea is not ready to win the EPL. Actually just five games into the season, it is hard to lay the red mat for them. There are other teams playing well in the EPL.

Manchester United will pick and choose EPL or UEFA this season. So far they are pulling everything to get there. Chelsea is playing efficient Football right now. Having Lukaku upfront may derail the way the other strikers will score. Today is the perfect example where even the defensive players can punish the opponent.

More goals could have been scored today. Giving Tottenham a wake up call well needed. Next week Manchester City vs Chelsea early Saturday Morning will tell us if Chelsea is for real. So far the team is steady only scoring to stay low profile. 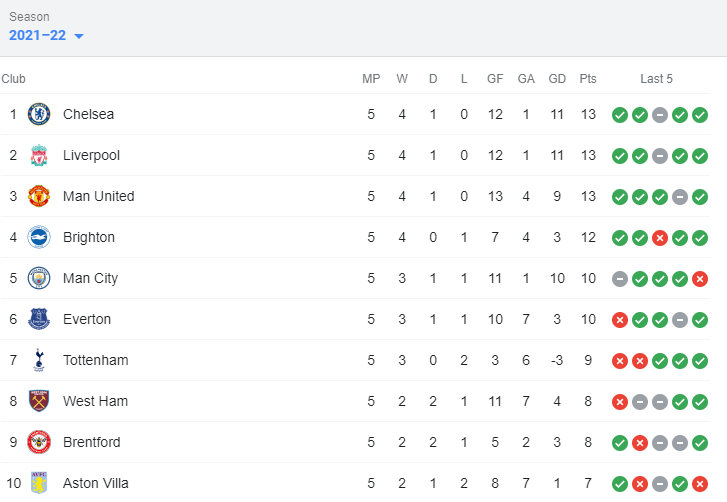 While Manchester City will score at will when they can, Chelsea tends to remain focus and not taking goals. Great match to watch next Saturday.
I did say after five matchdays you can have a feel of the top teams. Fortunately Chelsea is on top with liverpool.

#United is not too far. Three teams with 0 losses to go ahead. Surprisingly #Brentford is for real in 9th with 8 points. #Brighton is taking care of business early on. I was hoping to see #Leicester on top like they do for the last couple seasons

I will hold on to this top 10 and see if there is any changes going forward for the next 5 games. I know Chelsea will be part of top four when you look at their schedule. It will be not an easy win for all. Chelsea will have to be resilient and stamp all teams as the best in order to win this year the EPL.
How is your team doing so far ?