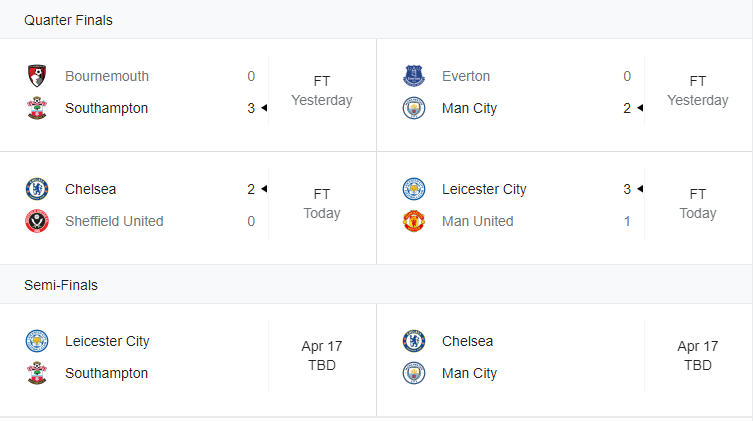 I do not follow FA Cup much but from what I see many divisions have a shot to win this trophy
if they can beat a club from Premier League. This is a daunting task to ask and most likely they ended up winning it at the end. A little break from EPL, even next week as well till April.

Watching from afar I see #Chelsea continues their streak of winning even luck is on their favor.
A little bit shock to see Leicester beating Manchester United. If there is one thing I hate to see in football is the defense passing the ball to the goalkeeper in tight space.
Mistakes always happen and the benefit of the doubt prevails.

So May 11th, #Manchester United will play Leicester in EPL. It could be a redemption match for United to play. So now this will be the fight for best second play. April 17th we will know the true contender for the Fa Cup final. From what happen to Manchester United, I could give #Leicester a pass to the Finals. Chelsea will have match test. I expect #Tuchel give it all for this one.

We all know Manchester City will win EPL so this game means more for Chelsea than City.
Everything happens so fast for Chelsea. #Ziyech has been playing great lately. He is finding ways to score. #Pulisic should score as well even as man of the match, he got game and skills to reap defense apart. Chelsea is well balanced to go all the way this year Champions League and FA CUP.

Not sure if fans will be able to assist cause no fans make the game dull a times.
As you can see for the schedule, All events in Europe will be done by end of May 2021
to make ways for EURO2020.
So much football this year.
How's your team play lately ?