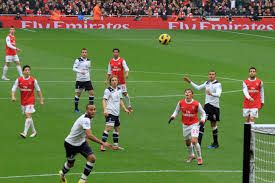 This is North London Derby, it's not always easy when it comes to Derby, the same city talk more of the same northern part of the City. This is final, today's match may tell who would be in the premier league 4th position as they would both play it like its the last match that they would be playing this season. If Arsenal win this match, then the top 4 is sealed, they would be leading Tottenham Hotspur with good 8 points while Tottenham Hotspur would just take their faith and hope to play Champions League next season.

Before this crucial time, Antonio Konté swore to send Arsenal out of the Top 4 and make Tottenham Hotspur take over, he succeed then, but Arsenal later take over when he lost some matches. This evening look like final to Konté than Arteta because this is the last last chance for konté or else Tottenham Hotspur and Manchester United (5 and 6) would be playing UEFA Europa league. This is a mean match between the two managers, the one that do his assignment best would win.