I laughed as I saw José Morinho trying to fight the referee because the referee is bias, he claimed that penalty is suppose to be awarded but referee blew agains his club. Maybe José Morinho is getting worst as he is getting old because such things happens and it even happened on last Champions League match where Barcelona played against Bayern Munich, there was a foul that Davies Alphonso committed against Ousmane Dembele inside box 18 which is suppose to be taken as penalty but referee didn't even look at it, maybe he thought Dembele dive and the VAR did not call referee's attention to it, so in such cases is where clubs would ask themselves what is the essence of the VAR because before the existence of VAR some referees still do their job very well. 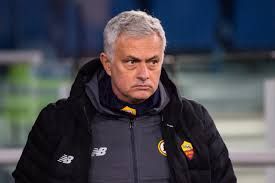 Some referees do their works perfectly so the essence of VAR existence is not difference from when there is no VAR back then. It's even more than a decade that José Morinho has been a coach and he has been dealing with different referees from different leagues so the one that happened last weekend shouldn't even bother him because it doesn't bring solution but only make things worst. As the other coaches are holding him not to go and fight the referee, referee put hand in his back pocket and brought out red card that sent José Morinho out of the field and that is even the worst thing that can happen to a coach.

As José Morinho was given red card, he won't be at the pitch side next weekend so his action has caused something more worst that the one that happened. The referee that does shits are England referees and if a coach complain, he would still be punished by the England FA beause they thought they should be the one to tell their referees if they are right or wrong and Thomas Tuchel got sanctioned because of that and still paid penalty fee for criticising the referee that made bad decisions against Chelsea and Tottenham Hotspur, although Mike Dean that was in charge of the video assistance referee machine was sanctioned which made him apologise for the mistake he did.

Because there was a mistake in the match, Mike Dean was sanctioned, that's a punishment for the mistake he did in the match; being the one that didn't call the referee's attention to the foul that happened before the second goal happened and made the goal stand which caused Chelsea share point with Tottenham Hotspur. I don't know if they punish referee and Video assistant referee at Italy like they do in England but even if they want to do, as José Morinho has tried to punish the referee himself, they might not want to punish the referee again. The Referees and the video assistance referee fuck up almost everywhere, even in Champions League that's not suppose to happen.