WACCOE - Forty-Six Years of Hurt by Bribery, Corruption and Cheating

We Are Champions, Champions Of Europe...

...is what you'll find if you search for the term 'waccoe' in the Urban Dictionary. Whilst singing this football chant, the Leeds fans usually take off their shirts, even if it's snowing and -4C, and wave them in circles above their heads. It's a sight to behold with more beer bellies on display than a naturist's Oktoberfest!

But how did this come about? Apart from a couple of wins in the old Fairs Cup, Leeds never won the Champions League or European Cup as it was once known. 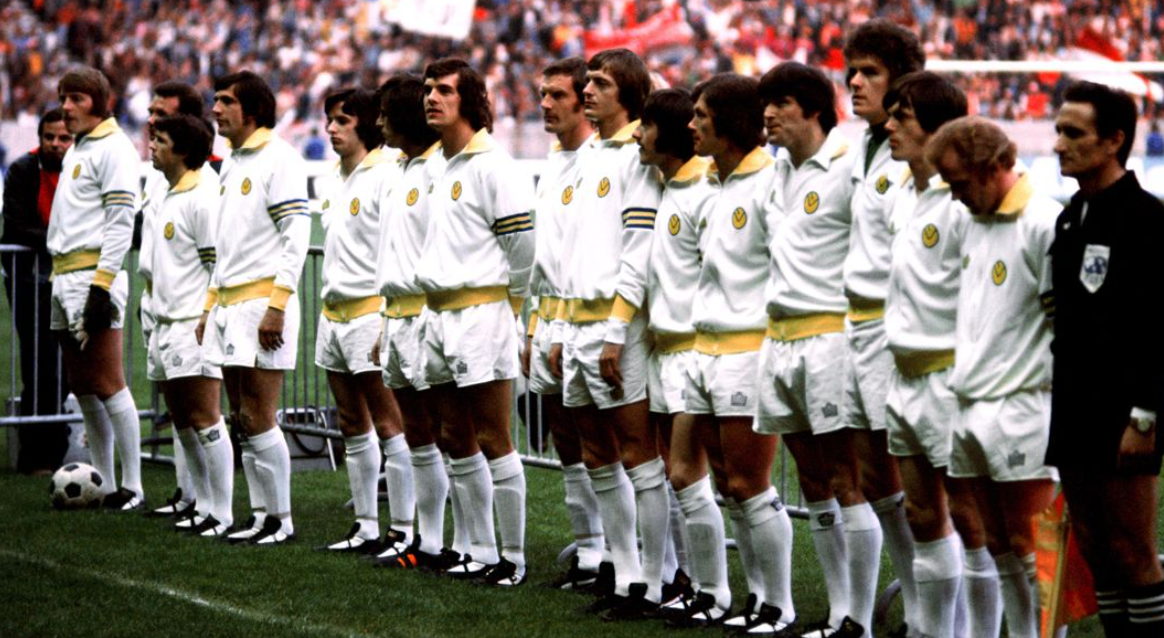 The team line up before the game, unaware of the theft that was to follow. (The photo is from Four-four-two magazine and is uncredited)

You're right, we didn't, but we should have and this post about subterfuge, shenanigans, bribery and plain old cheating is going to explain why not.

We weren't afraid, we had just knocked out Barcelona in the semi-finals who at that time had the legendary Johann Cryuff playing for them and we were going to fight and bring that trophy home to Leeds as a final swansong for that great Revie side which was reaching the twilight of the greatest era in our club's history.

Don Revie had of course left to manage England at the beginning of the season and we'd had Brian Clough in who lasted just 44 days, a story for another time, and in the dugout now was Blackpool legend, Jimmy Armfield. It was still "the Don's" team though, led by the red-haired, ferocious midget and one of the greatest midfielders British football has ever seen, Billy Bremner.

My eyes just glaze over when I see that list of names, some of whom are sadly no longer with us.

It was our first final in Europe since the final of the Cup Winners Cup in 1973 when we took on AC Milan in Greece and came away the 1-0 losers. The referee that night had been the first Greek referee to officiate a European final and his name was Christos Michas. Every decision went against us, all football fans say that, but on this occasion, we were right. There was a subsequent UEFA investigation, the result of which Michas was banned for refereeing ANY football match for life but the reasons why were never given. If you watch the game on YouTube, you will see what I'm talking about and after the match, the whole crowd were booing AC Milan as they quite sheepishly did a lap of 'honour'.

It's common knowledge that AC Milan had bribed the referee and UEFA hushed it up, the rumours will never be quietened as UEFA still to this day refuse to publish the full results of the enquiry despite an attempt in 2009 by a Leeds Euro MP, Richard Corbett to get the match result officially overturned and awarded to Leeds. Again, UEFA refused to cooperate and the result stands.

It's against this backdrop and the feelings of aggrievement that we took to the field that night in 1975, in many ways to put to bed the injustice of that loss, the trophy was going to be won for the team, for the fans, for the city and as a stand against the unproven bribery and corruption that ran deeply through European football and especially UEFA.

But it wasn't to be, and again we were put to the sword by some extremely dubious at best, downright cheating, refereeing decisions at critical points in the game that ultimately cost us the title against a poor Bayern Munich side who had finished the season in 10th place. Leeds were the favourites, despite ourselves having only finished a poor ninth in the domestic league but we had the swagger, skill and arrogance to pull off one final farewell for the glorious Revie boys. However, as the game progressed, the feelings of despondency began to fall...

Leeds dominated the first half and Bayern, captained by another legend, Franz Beckenbauer and full of household names like Gerd Muller were on the back foot. Two substitutions due to injury to Uli Hoeneß and Björn Andersson (who later went on to form the pop group Abbam Ok, he didn't but I was checking you are still awake!), added to the Bavarians anguish but at half time, it was still 0-0 due to two mysterious penalty decisions that went against Leeds, both fouls that came about through desperate Bayern defending.

The first was a handball. Beckenbauer was on his arse in his own penalty area when the ball hit his arm which was on the floor as he held himself up. We of course appealed but the referee, who in this game was Frenchman, Michel Kitabdjian. (23rd minute of the game if you watch it on YouTube). Even worse was to come when Clarke was one on one with Sepp Maier in the German goal when Beckenbauer tripped him from behind without playing the ball (34th minute) and again the appeals for a penalty were brushed aside.

The second half started much as the first had ended with Leeds in the ascendancy, just after the hour mark, Bremner was denied by an incredible save at almost point-blank range, and spurred on by their renewed confidence, Lorimer had the goal in the back of the net! The ref pointed to the centre circle, the linesman can clearly be seen running back to the halfway line for the restart. His flag never even twitched, and along comes Beckenbauer, remonstrating with the ref. The Leeds players point to the linesman on the halfway line and follow the referee as he runs over to him, then suddenly, without reason, the linesman must have told the referee that Bremner was offside and the goal is suddenly disallowed. (20minute mark on the second half video).
WE pushed even harder, left holes at the back and it wasn't too long before Bayern took advantage to take the lead, followed by second from a now demoralised Leeds and that was it. Two-Nil to Bayern Munich but if not for more disgraceful decisions from an alleged top official should have seen us bring the trophy back to Yorkshire.

I watched a video a few years on Sky where a number of top German players were interviewed as well as some renowned pundits and everyone was of the same opinion. Leeds were robbed. Beckenbauer of course has always maintained a dis-honourable silence.

The referee was officially rated by FIFA that night as 'very poor' and then went on to officiate at the 1978 World Cup in Argentina. No formal investigation took place this time.

In June 2014, Beckenbauer was banned by FIFA Ethics Committee for 90 days from any football-related activity for allegedly refusing to cooperate with an inquiry into corruption dealing with the allocation of the 2018 and 2022 World Cups to Russia and Qatar. He protested the ban, as he had requested the questions that were put to him be in German and in writing. The ban was lifted after Beckenbauer agreed to participate in FIFA's inquiry.

In February 2016, Beckenbauer was fined CHF 7,000 and warned by FIFA Ethics Committee for failing to cooperate with the inquiry in 2014.

In March 2016, the Ethics Committee opened formal proceedings against Beckenbauer regarding the awarding of the 2006 FIFA World Cup.

In October 2019, Black Mirror Leaks published email correspondence of Russian member of Parliament, Sergey Kapkov, where Beckenbauer and his adviser, Fedor Radmann, were named as recipients of €3 million for their votes in favour of Russia as host of the 2018 World Cup. Both allegedly received an additional €1.5 million in success fees after the 2018 cup was allocated to Russia.

In 2021, FIFA closed its ethics inquiry against Beckenbauer as the statute of limitations expired

Just another bent football powermonger alongside Blatter and the rest of the FIFA and their regional confederations. He was always thought of as a great footballer, but even in 1975, almost 40 years before he was finally found out as nothing more than a corrupt cheat, the signs were there for all to see.

As a 9-year-old, I remember the game well. My Mum and Dad, as well as an aunt and uncle, Keith, who took me to my first Leeds match when I was five as he was mates with Mick Jones, all sat around our black and white TV (my dad was a tight-arse) and watched the game. I remember well my Mum (who wasn't a huge football fan but was totally in love with Allan Clarke) and uncle Keith ranting and pointing at the TV, and I remember well, my bursting into tears when the second goal went in.

@samostically asked me the other day,

"How did you come to support Leeds?" There is no good answer to this question. You just do! It's an organic thing that can't be changed. Over the last few years as Leeds have fought to escape the Championship, people here in Thailand who might love football but don't totally understand its depth in the English fan's psyche have asked me why I don't change and support a more successful team! That's not how it works.
So now, back in the Premiership but struggling at the start of this season, our only hope is that we can qualify for Europe once more, and have the chance to put the injustice of the past to rest, but until then...

WE ARE CHAMPIONS, CHAMPIONS OF EUROPE

As a footnote, the outraged Leeds fans sadly went on the rampage in Paris after the game and smashed up the city. As a result, Leeds were themselves banned from all European competition for four years with to of those years suspended. It mattered not, our glory days were over and the dark days had begun, both on the field and off the field as our reputation for being the biggest hooligans in football began to grow and anyone from Leeds who visits Paris, even to this day has to lie about where they're from! Ask @chrisparis if you don't believe me!