Front-Ends / Interfaces to the Hive blockchain

I recently published a post titled HIVE Blockchain Tools and Services to gather ready links to many of the tools and services we offer on the Hive blockchain. As I stated in that post, the list was never intended to be exhaustive as there is just too much to list at once, plus there is a constant flow of developement that's taking place with new things coming online each week or two. As exciting as that is, it would make any comprehensive list obsolete very quickly.

Arguably, one of the most lacking areas in that post was my only mentioning three of the web-based front-ends / interfaces for interacting with the blockchain. One of the things we're often asked in TheTerminal Discord server is about the different interfaces provided by various Tribes for gathering content on specific topics and offering Tribe tokens as rewards thereon, so I've been compiling a list. Happily, @stayten, @wanderingmoon, and @unorgmilitia contributed some entries to my list, which was much appreciated! Anyone new to the Hive blockchain should note that all of the following are merely different ways to interact with the very same Hive blockchain. It's similar to having different doors into the same building. The default interface is HIVE.BLOG and some of the others (e.g., PEAKD, ECENCY) offer enhanced services while others allow tokens to be earned. 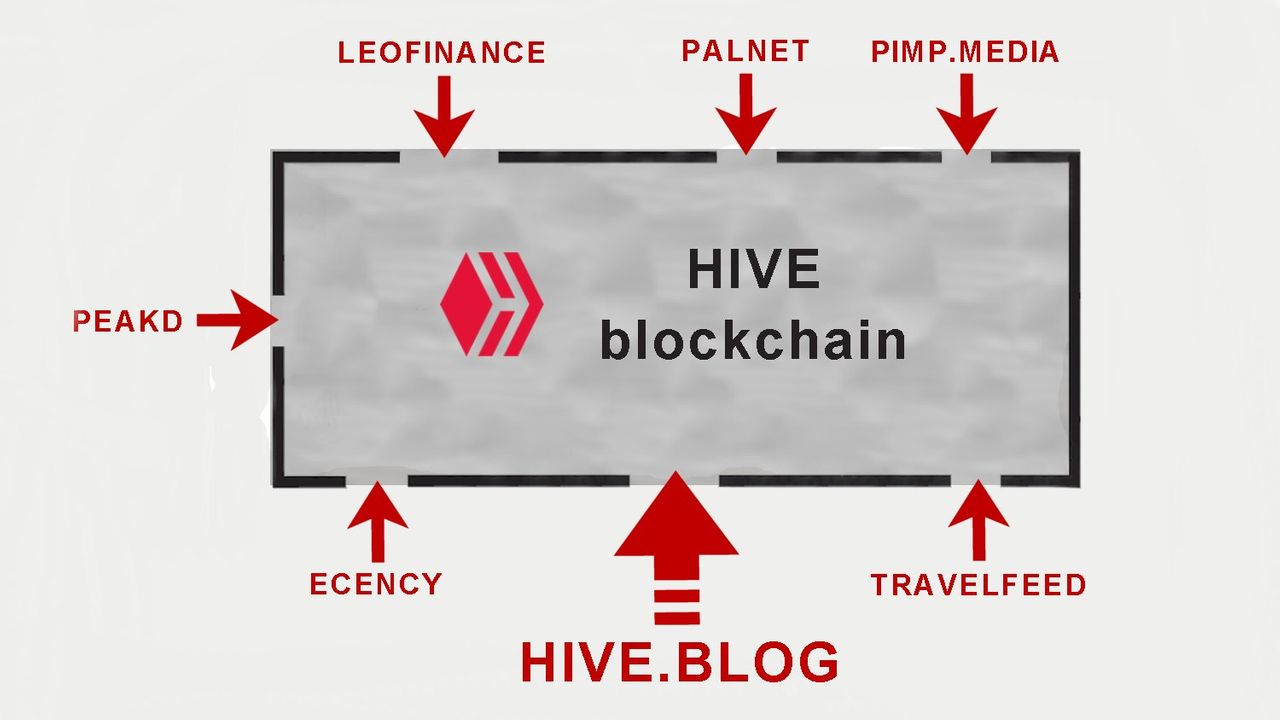 artwork by me, feel free to use, no attribution necessary

NOTE: The following list is for front-ends / interfaces that are availble via a web-browser for writing posts on the Hive blockchain. Mobile-apps are included on a separate list in the above-mentioned post.

The majority of the front-ends / interfaces were launched by a Tribe that has their own token on the Hive-Engine exchange. In those cases, their pimary token is listen in the last column. Non-Tribe front ends have "------" in the last column since they have no token, and those with "***" in the last column have reward "points"/tokens that cannot be bought on an exchange, but exist on-site only.

The above list is complete, as far as I am aware. Again, this list is only front-ends / interfaces that are available via web-browsers for posting to the blockchain, while mobile-apps are already covered in another list in the HIVE Blockchain Tools and Services post. If anyone has any additions or corrections to this list, please let me know!

If you are being tagged in updates to this post but do not wish to be, let me know and I will gladly remove the tag!

@theterminal assists those new to Hive to learn the etiquette & workings of the blockchain. If you like our work, please consider a delegation to @theterminal or @heyhaveyamet