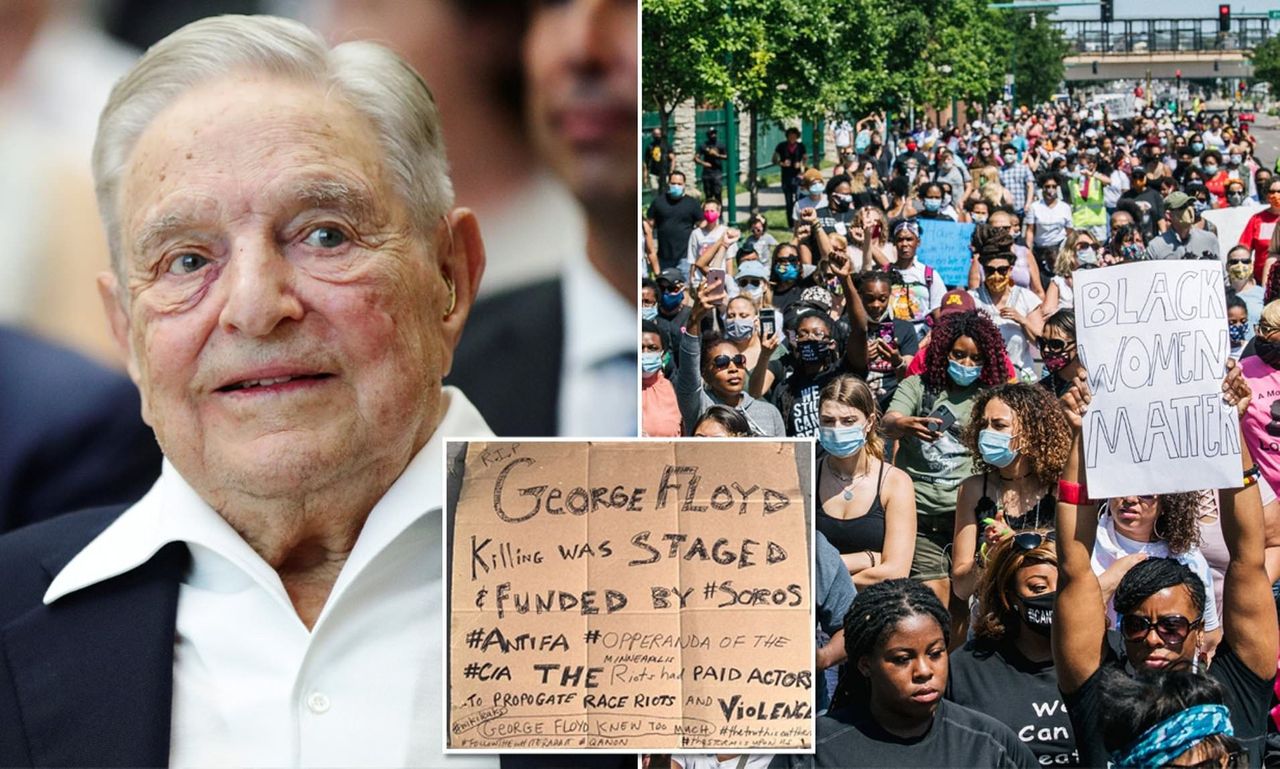 I will risk boring you with a history lesson which I hope you will find relevant.

Yesterday a friend of mine told me there had been another shooting in Chicago near where he lives and that no charges were laid, which made him suspect that the mayor and DA are complicit in the crime wave. I responded:

"I've been convinced of it. Who would want to dismantle the police and the DA's office? People who profit from crime, right? BLM/Antifa, what are they into and who are these "community leaders" they keep talking about? They would be drug gang leaders, right? That's who has the money.”

That George Soros and his octopus-like tangle of Non Governmental Organizations are funding Black Lives matter and Antifa (which are both internationally connected) is a matter of public record. And Soros money has installed anti-law enfocement District Attorneys including Kim Foxx of Chicago and Chesa Boudin in San Farancisco, sending both of these cities plunging into a wave of crime. Deliberately organized anarchy is being used to destroy the social fabric of the United States. And 20 years of useless war has ended and slowly, but inevitably, the soldiers are coming home to a society dissolving into anarchy.

It’s time to consider the history of anarchy and its recurring consequences. We humans beneath the surface of our civility are animals in the wild and history is in the end a panoply of consequences arising from our instinctive responses. That’s why we can look back 639 years in a distant mirror ( “A Distant Mirror: The Calamitous 14th Century” by Barbara Tuchman) and see our own calamitous time reflected. The arrogant wastage and paralysis of authority, the ruination and thievery of the endless war strangling any hope of a productive life and pushing people to despair and rage, a communications revolution: it’s all there.

In 1381 in England the violent rebellion known to historians as The Peasants Revolt exploded and swept toward London, nearly bringing the entire structure of society from middle-class business people to highest authorities and even the constitutional framework itself down to universal ruin. The way to violent chaos and revolution had been long prepared by many events and tendencies. Only 35 years previous, the pandemic Black Death had swept Europe and the British Isles killing from a third to one half of the population with the farmers taking the heaviest death toll. Economic relations which had been fixed since time out of mind were suddenly knocked out of whack by the sudden decimation of the peasant farmers; the price of labour burst its bounds and untended vacant lands reverted to unproductive wilderness.

And meanwhile warfare between England and France begot roving bands of rootless, unemployed soldiers which turned three quarters of France into a smoking wasteland; the failure of English arms of the 1370s released at last upon English villages the same bands of robbers as had ruined France. Perpetual warfare had done its deadly work upon the state that attempted to wage it as it always does. Every time some Duke or King mounted yet another useless, money wasting campaign the peasants’ wagons and horses and oxen were seized, young men recruited into the armies and ships were commandeered, leaving no way to get in the harvest or shear the sheep or trade the wool or do the commerce and the food production that was the very life of the nation. Was there a party or a movement against the permanent war or in favour of helping the common people against the lawlessness that was killing them? Not one voice in all the high places. If this sounds at all familiar it ought to. War and peaceful livelihood never did and never will co-exist.

In 1381 a hidden communications revolution that the ruling aristocrats of the day scarcely suspected allowed the peasants and workers to organize, assemble and direct an army of thousands which sprang out of the countryside with amazing suddenness and swept toward London. The communications revolution that birthed this anarchic army was the growth of reading and writing in the young and still unstable English language. Though the nobles still spoke French they were beginning to enjoy the recitations in English of Geoffrey Chaucer; meanwhile the commoners were enflamed by William Langland’s satiric tirade “The Vision of Piers Plowman”. The nobles should have paid more attention to Langland because the very fact of this book being so widely read and copied showed how much education in native English, taught by parish priests, had progressed. This was the digital revolution of the day.

The call to arms was prepared and triggered by coded instructions hand written and distributed to every village. Some educated person was always available to read these letters aloud in the village square. One of these notes hand written on parchment still survives. It reads, “John Shep, sometime St Mary Priest of York and now at Colchester, greeteth well John Nameless and John Miller and John Carter and biddeth Piers Plowman to go to his work and chastise well Hobbe the Robber.” John Shep was well known to be John Ball, the radical revolutionary whose preachings against the ruling clergy and nobles and his demand that all property should be held in common had made him a fugitive. Hobbe the Robber was known to be the Royal Treasurer, Robert Hales, whose taxes were sending the plowmen and carters and millers of the land into deeper and deeper poverty. Piers Plowman had become the symbol of the enraged farmers whose labour fed the nation. Billhooks and plowshares beaten into pikes and swords were taken up by battalions that sprang, as it seemed, out of the ground and marched by every road to converge on London.

It was crushed, of course. The leader, Watt Tyler (a maker of roof tiles) hesitated to kill the teenage King Richard II who came out alone to meet him. The peasant army had had no clear objective, only rage, and no program or means to replace the government with any structure that could function as a replacement. The nobles gathered courage and disbursed the army now reduced to a mob. The oppression of the people was clamped down even more heavily than before.

And that’s the trouble with anarchy. Always the same promise and always the same result. If lawless rage succeeds in ruining a bad government completely, a worse government always takes its place. It’s always, “Release your rage and burn it all down! And new harmony will magically dawn!”. There’s never anybody to ask, “If we burn it all down how then shall we live?” If there is no law, who will defend a poor man’s meagre livelihood? The triumph of Anarchy is always a prelude to absolute rule; it happens every time. In fact, some people who are ambitious to bring on absolute rule “for the greater good” will stimulate anarchy, thinking to use it as a tool. Can you, John Nameless, fund a private army? No? There are those who can and they will march through the ashes and stake their claim over you.