The latest news from Hive game Rising Star is a new set of Halloween-themed cards. This is a bit of fun that gives obsessives like me something else to collect. There is one new musician called Undead Fred who does not have spectacular attributes, but is needed for a new mission. I was lucky to get him in the first pack I opened after he was released. 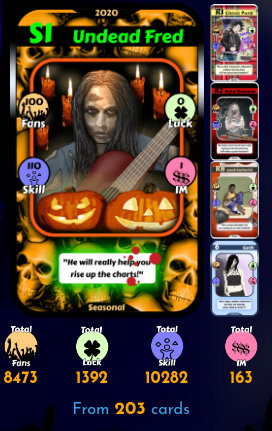 The new mission is only really to give you a chance of getting the matching instrument cards. There are three of those and I have the bass so far after seventeen attempts. You only get one Starbit and no XP. I am running this several times each day as I am just into collecting the different cards. 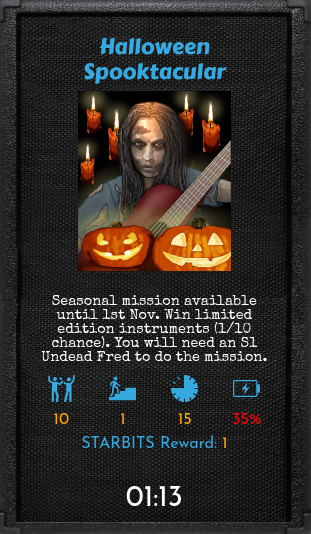 Some people are selling the cards at fairly high prices. I will only do so if I get duplicates, but will be looking for swaps to get the set.

These cards have their own appropriate sounds which I have used in one of my bands. It is suitably horrific.

If you want to start playing it costs you nothing. Just log into the game with Keychain and you can kick off the Illegal Busking mission to start earning. Check out the music from the community that plays on the game radio station.

Meanwhile on Splinterlands I have been continuing to play despite the latest changes which limit my winnings considerably compared with before. I cannot go higher than Gold I until my card collection grows a lot in value. Previously I could get to Champion II most seasons. I win less in each daily quest and at the end of the season. I will actually get more this season as the new rules started a day in and I was still on Diamond then.

I do enjoy playing and considering the time others put into games with no financial rewards a few minutes of my time on the quests is not much. I am just trying to optimise my deck to win more matches and get more DEC when I do. One way to do this is to use more gold cards as they give you 10% more for each one you use. So I have been upgrading my gold cards whilst selling off the standard versions. The golds can be expensive, but I am generally funding this just within the game.

This is some of my collection. I am not using all of them, but the Wood Nymph and Screeching Vulture are great for Earth. Mermain Healer is my most valuable card and really useful in Water battles to heal the back line. I would love to level her up, but that would cost a lot. My Water and Earth summoners are both up to level 5 now. That seems mostly adequate for the Gold League. 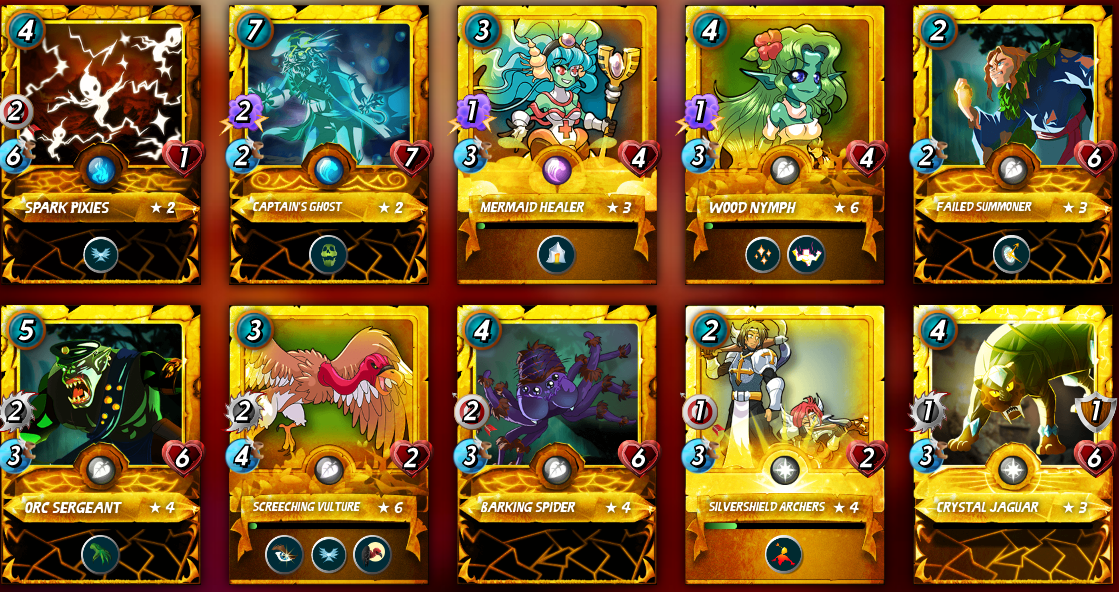 I am seeing less obvious bot accounts, but it looks like some may have consolidated their cards to keep winning something.

I have also joined a guild at last! @chris-uk offered some places and I took him up on it. This gives me an extra few percent DEC for each win, but you are expected to contribute some to the guild so it can level up and grow. 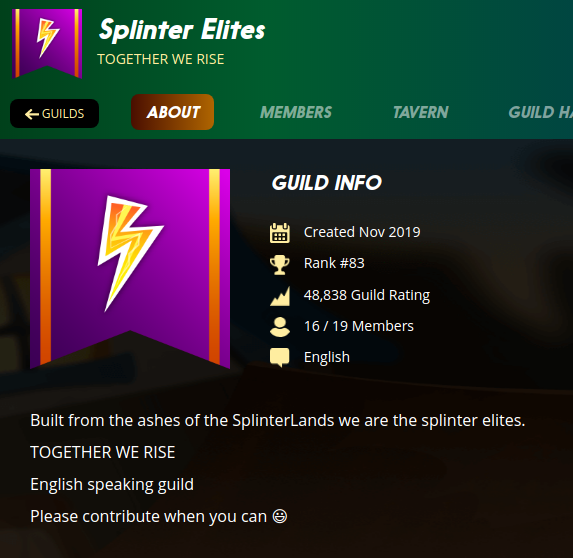 I like to have an extra social side to the game as we can chat in the 'tavern'.

Splinterlands is still the biggest Hive game by far. I know some people are really not happy about the new power limits. Some will be selling up their cards, so there may be bargains for those who stick with it. I can see that change was needed to slow down how many cards are issued, but there had to be compromise somewhere. It seems the main difference between people and bots is how many cards they keep and so that was used as the limiting factor. Another annoying aspect is how many potions you get as part of the winnings. These only seem to be useful if you buy a lot of packs and I am not doing that. There is a new sort of pack with different cards, but if I got those then I would have to spend more on levelling them up to something useful. I have over a hundred of each type. It would be nice if we could burn these for more DEC.

I am still playing Cryptobrewmaster too. That only requires me to check progress a few times each day and kick off missions. Some new features have been appearing this week with different leaderboards and 'events'. I am not sure how the latter work. I would hope there will be upgrades to spend our tokens on soon.

There are some other Hive games out there, but I really do not need to be spending more time playing. I have other things I ought to be doing.