After the disastrous Mr Kipling Carrot Cake Slices, I decided to try out their Winter Whirls. I just wanted something different. These looked like they were going to be quite appetising, so I thought, why not? 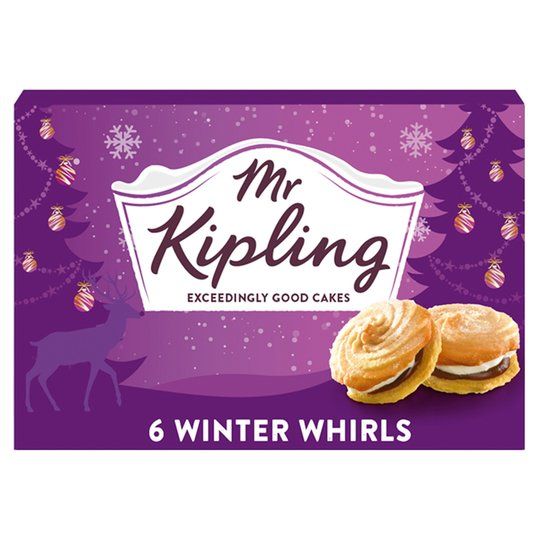 ” Shortcake whirls with a vanilla flavour filling and a spiced apple jam. It's the little things that mean the most like an exceedingly good cake from Mr Kipling."

When I opened the box, I expected there to be a cellophane wrapper surrounding the tray as there always is with Mr Kipling cakes. It didn’t bother me so much. I think I would have been a little but more careful how I took them out of the box so I wouldn’t get covered in crumbs and icing sugar! These were small and light and I didn’t think six were going to be anywhere as near enough to fill up my little yummy. The whirls were quite light and crumbly… very crumbly. The shortcake had a nice sweet yet buttery taste to it. Then you have the white vanilla flavoured smooth cream and the spiced apple jam sandwiched between the two whirls. The spiced apple jam reminded me of mince pies. This was a good thing as I love mince pies but hate the bits!! This was like the mince pie I was waiting for but in a Viennese Whirl. The jam itself did taste like a deep spiced apple if you have it on it’s own, but I really liked it all together as it should be eaten.

It’s so easy to eat these one by one… whole! But, to savour the taste, I bite these into three or 4 pieces just to make them last longer. The little whirls do have a dusting of icing sugar on top to give them that snowy appearance. I thought this was a simple, yet nice touch. I love these so much! It’s such a shame they are only here for the festive period. I might have to stock up on them before they go!