Mr Kipling have brought out some more flavours of their Viennese Whirls. So far I’ve had the Winter Whirls and they were divine. So now I’ve moved onto the Chocolate & Orange Whirls. I hope these taste just as good. 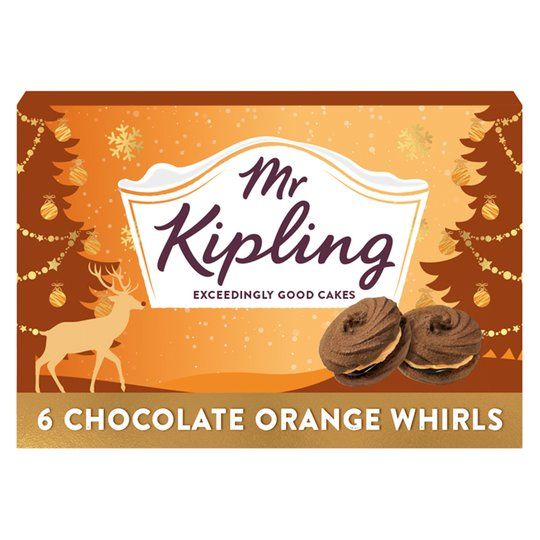 ” Chocolate flavoured shortcake swirl filled with a chocolate sauce and orange flavour creme. It’s the little things that mean the most like an exceedingly good cake from Mr Kipling."

I loved the look of these whirls. The orange cream and the chocolate sauce sandwiched between two shortcake swirls! They looked rather decadent. I could smell the chocolate and orange as soon as I opened the box. They smelt good enough to eat, and eat them is what I intended to do! I take out one of the swirls and cute it in half. The shortbread was moist, but not to wet. I don’t like it when it’s too dry either as it just gets too crumbly. The texture of these were really good. The flavour was chocolatey but not a deep chocolate flavour. It did taste more confectionary rather than a rich special flavour. However, the filling made up for it. The orange creme was so smooth and there was a nice dollop. Then you have the chocolate sauce too. The chocolate sauce was a bit sticky as some of it oozed out onto the packaging and it was hard to wipe off with your finger. Well I didn’t want to leave any of the sauce behind! The orange flavour was sweet and I could have handled a lot stronger flavour. The chocolate sauce was like a sauce you would squeeze over an ice-cream. It was nice and it worked well with the orange cream. A nice little whirl.

I would have preferred it if these did taste a bit more special rather than your big batch of confectionary supermarket shelf treats. They were nice and I would definitely have them again. I wouldn’t pay full price for them, and I didn’t. They were on special. I would expect a lot more flavour for my money if I did pay full price. I haven’t seen this flavour before in a whirl and it was a good idea. I’m guessing Mr Kipling brought these out as a festive flavour? I wouldn’t call them festive, but you can’t beat that classic combo of chocolate and orange.