My long awaited Final Fantasy VIII Review is here! There's a minimum amount of spoilers here but if you're into this you'll enjoy the game. 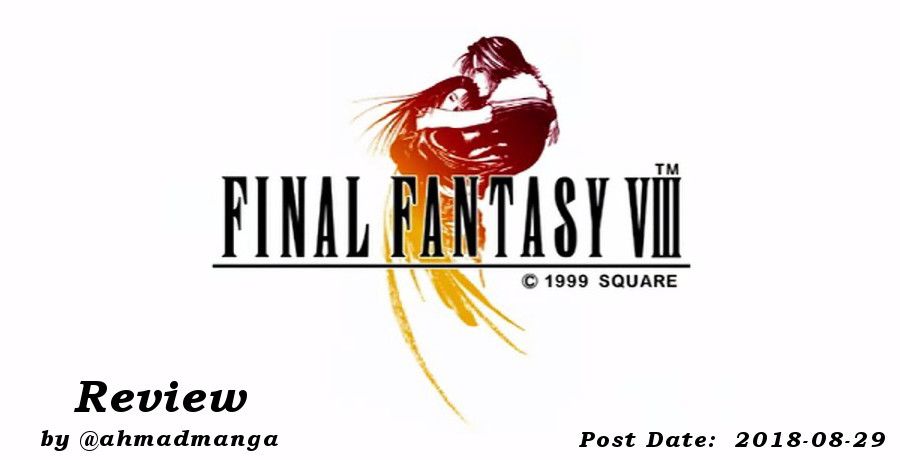 This review is about the Steam Version of the game,
I'll still treat it as a PS1 game due to it being an enhanced port.

Following the success of Final Fantasy VII, Squaresoft started working on two next titles in the series. Final Fantasy VIII is an ambitious project in its time, it took everything from the technology used in FFVII and showed people what a PlayStation can do! At the time, the animation and pre-rendered scenes, even the backgrounds were the top quality of a PS1 game. FMV sequences were the best quality of its time. Rivals and might beat actual movies in quality.

The battle system feels fresh despite using the same ATB system used from FFIV on-ward. The newly introduced Junction system and engaging dialog manage to overcome Final Fantasy VII systems & story complexity, that final thing, in my opinion, made this game an oddball in the series.

The story happens in a world with technology close to ours in the nineties. They have televisions, cars and rocket ships. The world is in a severe political unrest. Countries are at war all the time. The story starts at a Garden. A School to train young mercenaries who work for whoever pays them more Gil, effectively using the fact that war is happening. There's No Right or Wrong. Reality is harsh.

Normal people can't use magic but those who do are few and almost always women called sorceresses. Still, people managed to make a way to use magic themselves.

Through operation of junctioning some beings called Guardian Forces to their brain, allowing them to use and draw magic from their environment and become stronger fighters able to rival a sorceress. This is implied to be only possible for trained people from a young age to do and is rumored to have a severe side-effect. Those GFs that can be summoned in the battle but acquiring them needs to make a pact with them usually by fighting and winning against them.

Only Balam Garden... The school of the main character squall studies at,
have no reservations at training its students to Junction Guardian Forces.

The plot of FFVIII is a mixed bag but it gets increasingly weird (like every FF game.) I like every single idea of the game: Realistic Setting with fantasy elements! Political Situations! School life that is awesome! Playing mercenary missions! Dream World! Twist in every corner! The story is very interesting. That is, once you could understand it. The story follows our aloof hero, Squall who just had a fight with his rival Seifer before he starts the exam to become a SeeD. By joining a real war! After he qualifies with much struggle. He, along with few his fellow SeeD members are sent to their first mission. Things escalate for worse when a Sorceress Edea appears claiming to rule the world! "I'll let you live a Fantasy beyond your imagination.
You fools! The age of terror."

The story is more entertaining seen than told.
I tried to not spoil anything important.

Add to that a strange experience happening to the main characters. Sometimes they lose their consciousness and see some sort of Parallel or Dreamworld, with squall dreaming to be a man called Laguna.

Final Fantasy VIII focuses on two themes Love & Change, if you haven't figured out from the logo, there's a romance in this game, but also there's familial & platonic love. The changes in the world and characters are subtle but you can easily notice how everything changes in this game and character reactions to it.

If I had to describe the story briefly, "It's a self-discovery story. Learning the difference between real & imagined adulthood." The story is about finding love and acceptance while saving the world takes the second place.

While Squall is unmistakably the main character. He must be in the party whenever he's around, though the game lets you control other characters as you main at many points through the game. The smaller cast and their relationship with another let the game focus & give depth to each one of them.

The character is what you'll have if you put real-life orphan children into military school and forced them to fight in wars before adulthood. Every SeeD member is broken with some character defect that's sadly many people struggle within our real world. The one main character that's not a military member has family problems and her plans are too immature to succeed.

The cast is deep and can't be described in one word, Squall thinks a lot and we can see his thinking dialog boxes. Seifer, his rival is unique attention seeker thug who somehow leads the discipline committee. Quistis, the instructor, can't discipline her students, she also has 'misunderstood love.' Zell, the guy who can't sit still for a moment and talks too much. Selfie, is the typical hyperactive girl who is more aware than she seems. Irvine, the sharpshooter, sweet talker, and full of confidence until put into an actual war. Riona, is the poster girl of the game! anything more than that will spoil her story! (If I didn't already.)

Those who kept their teenage traits are prone to make bad or emotional decisions. And those who forced themselves to become adults are the most confused ones of the cast despite appearing the most dependable.

But the character I love most is Laguna.
Has all the charming point. No wonder he has so many fans even inside the world itself. Even his friends are unique and somewhat memorable. As one of the first 3D RPG games, FFVIII's graphics system uses 3D character models on 2D pre-rendered environment. FFVIII improved this system in many ways over the previous entry VII. Still, I had issues controls in the exploration part of the game, sometimes I try hard to be in the right position to talk with some NPC. But for a PS1 game, I can let that pass. That was the experimental age. Even some PS2 games had worse control scheme. After the success of the Materia system in VII. The Guardian Force (Junction) system introduced in this game is similar, more customizable and sometimes it feels it strips the characters of their personalities. (Thank God each one have a unique limit break.)

Summons (GF) have a bigger role in the FFVIII than any other Final Fantasy, unless you have one equipped you can only do "Attack" command. As they do more damage than magic, gives you a spare health, they make the game too easy when used, but too hard when they aren't. It makes FFVIII look unbalanced. Ifrit, the first summon you fight in the game.

Fitting its mercenary theme, FFVIII utilities Salary system. Instead of earning money through random encounters, you're given money on intervals depending on your SeeD level. In my opinion, this system fits the story-line completely but I'm not sure of it as a gameplay mechanic. Money is less important in this game because you only need a little for weapons. And everything you can purchase is available through some Junction ability or monster drop.

The leveling system of VIII is different than every other Final Fantasy, I didn't bother to understand it since FFVIII adapts its difficulty to your level. The only reason you'll grind is for item farming, and if you wanna %100 the game, you'd do a whole lot of it. If you know what you're doing (or read a guide,) and mastered the game's Junction system and abilities nothing can stop you. The system is so exploitable that if you know which enemy you'll encounter, you can adjust your stats and abilities to defeat it without taking any damage against most of them. That's a game breaker but it's rewarding for a second play-through if you're only there to count the foreshadowing points! (Someone did that, right?)

Awesome Despite Being Confusing!

I say Final Fantasy VIII is better overall than the previous FF games. (I think my opinion might change after I play FFVI.) While I like the expanded universe of the FFVII more. This eight entry in the series is unique in every aspect and clearly, the developers put so much effort into making the story feel engaging!

The foreshadowing in FFVIII might be one of the best in the whole PS1 era games, each twist that seems so sudden becomes clear it was planned out from the start once you play it a second time. I had trouble many times to find the next destination in the game, even when I know where to go I can't find the place. I used guides on Steam more than once to figure my way. The Junction system seems deliberately made to be confusing and hard to master because you're the strongest once you do.

Sadly, it requires too much time if you're not using a guide. At 72 hours and I wasn't at the ending of the game yet! And while the story is worth it in my opinion, it's not for everyone.

I Recommend this game to Final Fantasy fans to who haven't tried it yet. Those who want ambitions but strange take of a PS1 RPG. I highly recommend it to play it straight after FFVII or FFVI. I recommend to people who love customization and learning complex systems and have enough time to do so.

I won't ever recommend it as the first title in the series. It's too risky to do so, I'd recommend FFIV or FFVI because they have what I call the real final fantasy vision. I won't recommend it to those who like easy to understand story-lines. FFVIII isn't Kingdom-Hearts-level-complex but what do you expect from Squaresoft?

Compared to how AAA titles these days are made too easy,
Final Fantasy VIII is challenging both in story and gameplay sides. Ugh!! I can't get this song out of my mind... And this part isn't even Latin!

What are your thoughts?

I'm interested in your comments. If you want more posts about FFVIII I wrote about the leader's dilemma & stated squall as the example in "No one can live alone" post. If you want to know about my relationship with Final Fantasy in general check this post out.

I Still Have More to say!!

But the post is already too long, feel free to ask me any questions about the game or Final Fantasy in general (the ones I played.) Let's start a discussion!

I usually don't ask this, but please share if you liked the review.

All images are taken from the game Final Fantasy VIII (Steam Version) taken by me. All links are posts by me trusted sources. Finally, thanks to @opgaming group for support and to @linnyplant for recommending using Grammarly before I post anything.