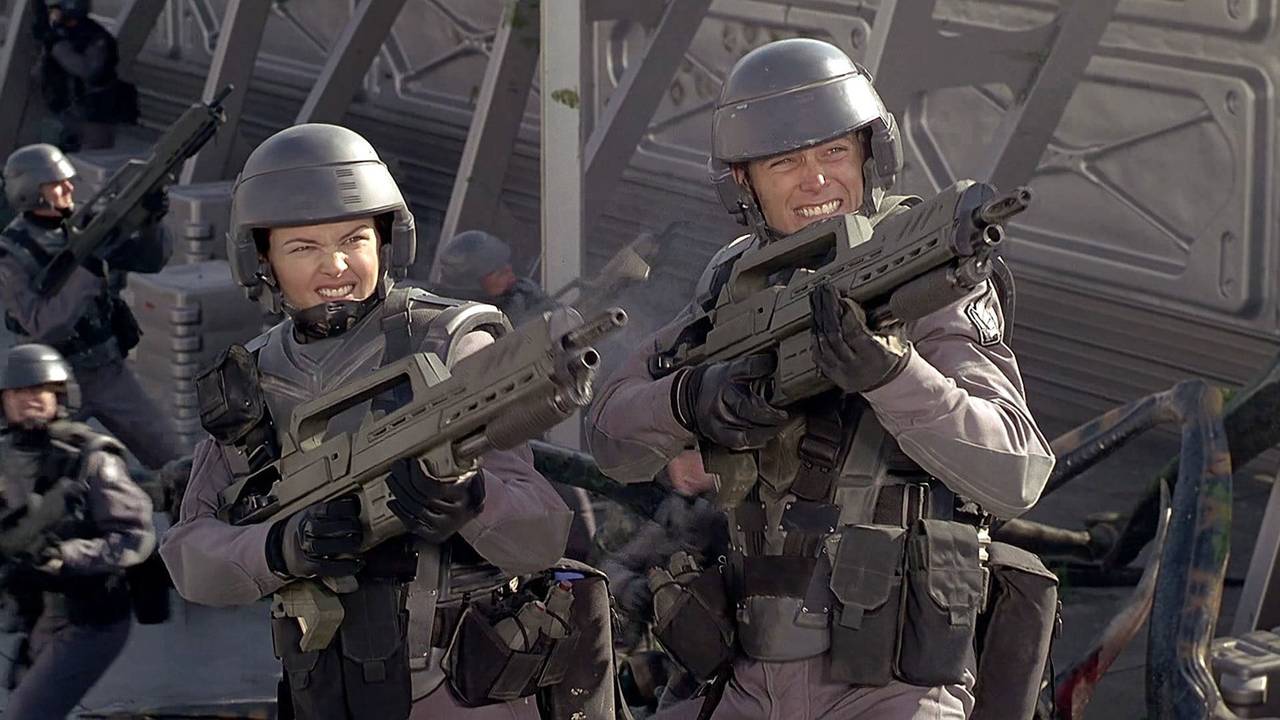 Ibn Khaldoun, 14th Century Arab historian, wrote that "the past resembled the future as water resembled water". Many historians would disagree with that, yet few could deny that there were instances when certain historical situations from different periods had remarkable resemblance to each other. Even certain Hollywood films, products of industry infamous for its distortion of historical and contemporary facts, contributed to this phenomenon. A film can be inspired by the past or present and later serve as incredibly accurate portrayal of the future. All those who doubt in films' ability to do that may change their mind after watching Starship Troopers, 1997 science fiction spectacle directed by Paul Verhoeven.

The film is based on the famous 1959 novel by Robert A. Heinlein, one of the most popular and most controversial authors of science fiction genre. The novel described future human society in which democracy got replaced with militaristic meritocracy - system in which only those willing to serve in the military were deemed worthy to participate in political process. Ed Neumeier's screen adaptation shows that, at least superficially, there is nothing particularly wrong with that system - future Earth has transcended race and gender problems and the economy is so sound that only tiny fraction of Have Nots bothers to gain citizenship through Federal Service. Johnny Rico (played by Casper Van Dien) has rich parents and joins Federal Service only in order to impress his high school sweetheart Carmen Ibanez (played by Denise Richards). What was supposed to be the way to win a girl's heart turns into something more serious when Johnny's home town of Buenos Aires gets wiped out by an asteroid, apparently launched from Klendathu, home planet of Arachnids, race of giant spider-like aliens. Johnny, just like millions of young men and women, gets thrown into brutal war where human technological supremacy doesn't guarantee victory against countless hordes of monsters.

To say that Starship Troopers was a film ahead of its time is an understatement. Few films were so misunderstood and so savagely criticised as this one. Fans of the original novel were outraged with the way Nuemaier and Verhoeven had "betrayed" the source and turned one of the best science fiction novels into "dumb action flick". The audience, conditioned to expect just another escapist "thrill ride of the summer", was shocked with the graphic violence, nudity, dark sarcasm and misanthropy usually not found in 1990s Hollywood blockbusters. That resulted in box office disappointment but the most terrible blow to the film came from the critics. They apparently paid most attention to the film's costume design and because of that attacked Starship Troopers for "promoting fascism".

Seven years later all that criticism is moot. In light of current events, Starship Troopers is becoming a film more relevant for the world than everyone, including its authors, could have ever dreamed of. Actually, if someone pays attention to many details in the film's plot and compare them with contemporary news, he or she would find many chilling similarities. Verhoeven's futuristic universe looks like incredibly effective allegory of our world. A superpower that has transcended race and gender problems and long time of prosperity is suddenly awakened with nasty realities of universe when one of their cities gets struck with disaster. War is declared, less because of sound strategic interests and more in order to restore national pride and lost sense of security. Thousands of young men and women are sent to bleak desert battlefields where their technological superiority is of little use against hordes of enemies that attack with suicidal vigour. The enemy has been seriously underestimated, which results in many young men and women being beheaded, dismembered, disembowelled or sodomised; the price in human lives becomes nearly unbearable while the enemy finds many creative ways to strike, including attacks on tourist resorts. Some sort of the light at the end of tunnel appears only when the enemy leaders gets captured and taken out of their holes.

By serving as mirror to our times, Starship Troopers shows that the current world problems didn't have its roots in present or, as many misguided people tend to believe, in a single man who somehow managed to wreck the otherwise perfect past. A decade earlier, while making RoboCop, Neumeier and Verhoeven used the medium of science fiction film to speculate how some disturbing trends of Reagan's America might develop in the future. In case of Starship Troopers disturbing trends were found in Clinton's America - under the guise of prosperity, hedonism and aggressive promotion of "political correctness" there was potential for militarism and fascist-like media manipulation. This potential, occasionally noted during inconsequential bombings or PG-13 wars like NATO campaign against Serbia, was finally unleashed following September 11th 2001. Americans, just like protagonists of this film, lost their innocence and discovered some unpleasant truths about themselves. Under certain circumstances even the proud citizens of enlightened liberal democracies can embrace policies of murder, destruction and torture. What is even more disturbing is realisation that, once the line is crossed, there is no way of returning to pre-war bliss and innocence. All those hoping that a single election could bring back the times before WTC attacks are as delusional as all those who dreamed about ways to restore the world shattered in Sarajevo 1914. The world is revealed to be much nastier and difficult place where simple and cheap solutions don't work any more; the best thing to do is to persevere and hope that the light can be found at the end of tunnel, just like the protagonists saw it at the end of film.

Starship Troopers is great film because its authors managed to present such depressive content in the form of incredibly entertaining action adventure. Just like with RoboCop, even those who recognise explicit social criticism in the film's script are going to root for the protagonists and be equally impressed with the way Verhoeven created world both futuristic and close to our own. Although CGI effects at times aren't as effective now as they were seven years ago, this film still features many awesome images. The alien monsters in the film are as impressive and, in some way, even more realistic that those in Aliens. Great care is given to many minor but very revealing details - the most talked about example is in the uniforms that suggest that futuristic military draws its inspiration from institutions like Wehrmacht, Luftwaffe and Gestapo. Film's structure is also superb - otherwise simplistic plot is cut with propaganda/news clips that provide clever and satirical exposition of the futuristic world and its issues.

The acting in the film used to be criticised, not because of its quality but because of the film's cast. Somehow critics couldn't accept the idea of futuristic soldiers looking like fashion models. Whether they look great or ordinary, actors playing this film's protagonists did very good job. Criticism based on actors' perfect looks loses much of its point when some of current socio cultural trends are taken into consideration - with sufficient development of cosmetics, medicine and technology the world where every youth is supposed to look like Britney Spears and Justin Timberlake is going to become reality. Casper Van Dien portrayed convincing transformation from innocent youth into battle-heartened and militaristically indoctrinated veteran. Denise Richards, who plays his love interest, was easily overshadowed by Dina Meyer in the role of her rival. Verhoeven made casting coup with Neil Patrick Harris - actor best known for his role of super-intelligent child doctor cleverly uses intellectual charisma to create this film's closest equivalent of human villain. Talents of Michael Ironside and Clancy Brown, two actors known for playing villains, are also put to good use - they are very convincing in the roles of officers who transform spoiled teenagers into adult soldiers.

Another reason why this film was so criticised is in the display of unbelievably stupid military tactics - bands of lightly-armed infantrymen charge against masses of numerically superior and suicidal enemy and get trashed in the process and, while all that happens, artillery and heavy weapons are nowhere to be seen. Because of that Starship Troopers was rejected, especially by those who accepted 1990s vision of all-powerful and absolutely perfect US military. But many examples of such military stupidity could be found in history. American Civil War became such prolonged and pointless slaughter mainly because it was waged by amateurs learning their trade from Napoleonic tactics manuals and not taking inventions like Minnie ball, telegraphs and railroad into account. Few decades later European militaries suffered the same fate because of their generals had failed to seriously think about repeating rifles, machin eguns and modern artillery. It isn't that hard to imagine future military making similar mistakes, especially after centuries of peace and against the completely alien enemy.

Whether it tells a about our past, our present or our future, Starship Troopers is a great film.

(Note: The text in its original form was posted in Usenet newsgroup rec.arts.films.reviews on July 6th 2004) 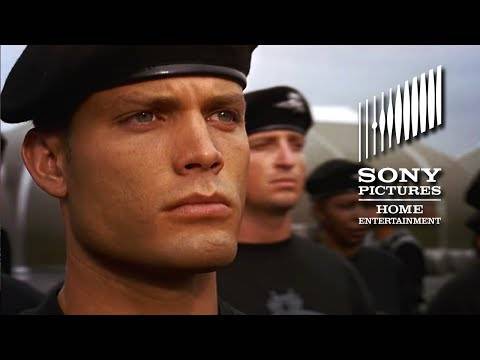