The bacterial flora is a group of microorganisms that are usually found on any substance or fluid that in some specific conditions can act as pathogens, said bacterial flora could be in the water and cause symptoms unwanted for the human being.

Currently in the community sector of May 20 of the parish of Santa Bárbara de Zulia in the municipality of Colón, Zulia State - Venezuela is presenting problems with water for human consumption (drinking), for example the hours in which this service is provided. to the people to have to protect the water in containers for long periods of time, which causes the outcrop of bacterial pathogens; in addition to this we have the unreliable methods of purification and the large amount of drag material that has the water that comes out of the taps; given the dirt in many cases of the pipes that transport it.

Due to all this, the need arises to carry out a study and evaluation of the drinking water of a given community in order to be able to give information about the bacteriological pathogens that may be present in the water. In this publication we will also make a description and orientation of how to deal with this type of problems, from a point of view that allows to know the symptoms, causes and consequences of drinking water for human consumption that have bacteriological pathogens present, will also be explained the most reliable methods to eliminate both the suspended matter and the microorganisms that exist in the drinking water of that community.

To give order in the solution of problems, I give to know a series of questions that will help us to analyze the environment of the problem:

Characteristics of drinking water and influence according to its origin

Drinking water for public consumption are those used in their natural state or after an appropriate treatment, whether they are water destined directly for consumption or waters used in the food industry, so that it may affect the health of the people who take the product. final.

When this water for consumption comes from underground aquifers, it is less likely to become sick due to the presence of bacteria present in it, since the water coming from subsoil layers is less prone and in contact with pollutants, very much the opposite happened with potable water that is deposited on the surface in tanks and that is transported by pipes that accumulate sedimentary material which does have pathogenic agents of bacteriological origin.

Deterioration of the quality of drinking water

As the demand for water in the population increases, problems related to its quality may arise, especially those caused by pollution. This contamination produces a change in the physical, chemical or biological composition of the water due to the entry of dangerous substances or microorganisms that imply a risk to the health of the people. The biggest problem that arises is the contagion of infectious diseases of water transmission. The most frequent problems for the contamination of drinking water are:

The pipes that transport the water, most of them are of characteristics whose constitution is ferrous, this type of material when coming into contact with the water that is transported makes parts of iron now become part of the constitution of drinking water, which later with sandy material that accumulates in the walls of the pipe, it is a bacterial proliferation that occurs in this transport water.

Legal bases of the Constitution of the Bolivarian Republic of Venezuela

The purpose of this law is to regulate the provision of public drinking water and sanitation services, establish its control, control and evaluation regime and promote its development. Within its principles, Article 3 establishes the preservation of public health, water resources and the environment, ensuring access for all citizens; with the adoption of management models based on quality, efficiency, reliability, equity, non-discrimination and profitability in an environment of transparency. Its objectives, outlined in Article 5, indicate: i) construction of a new institutionality, ii) establish the bases for regulation and control of the provision of services, iii) establish and protect the rights of subscribers, iv) define an economic regime that guarantees efficiency and equity, v) subsidies policy, vi) promote the appropriate participation of the public sector and the private sector in the provision and expansion of services, vii) establish criteria for the provision of services in the rural area and in uncontrolled developments, viii) promote the establishment of appropriate management models and ix) promote the participation of organized citizens in the development and provision of services.

Surveys conducted to the community of the sector May 20 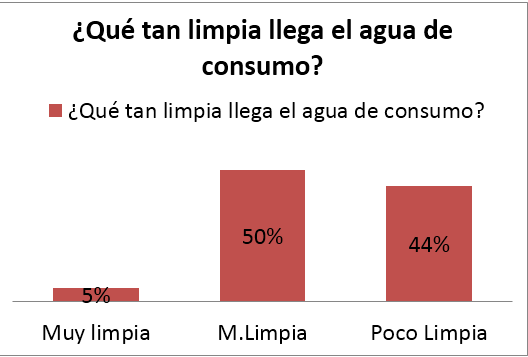 The question number two of the survey showed as a result, in a total sample of 18 people surveyed, 50% that the water arrives Medium clean, 44% little clean and only 5% think it arrives very clean. Question number three of the survey showed as a result, in a total sample of 18 people surveyed, 88% used methods with the purpose of purifying water and 11% did not use them. Question number four of the survey produced as a result, in a total sample of 18 people surveyed, in this survey 55% of the people had water contained in containers for more than three days and 44% had no contained water. These five questions made to a sample of eighteen people from the community sector of May 20, makes me conclude that although the community makes an effort to set their own parameters for trying to make water available from the network system of communal distribution, the little frequency in which water reaches their homes means that it must be stored in large tanks for long periods of time, which is probably one of the causes of bacteriological pathogens found in this water for communal consumption..

The bacteriological analysis, carried out in the present month, specifically the first seven days, resulted in the growth of enterobacteria and an isolated germ Proteus SA. At this moment we will take the enterobacteria as focal point, to describe its functionalities and its prejudices to health.

Thus we can say that Enterobacteriaceae (from the family Enterobacteriaceae) are Gram-negative bacteria that contain more than 30 genera and more than 100 species that may have coccus or bacillus morphology. The members of this group are part of the micro biota of the intestine (called coliforms) and other organs of the human being and other animal species. Some of these species can live on land or in the aquatic environment, as we have seen in this analysis.

Some of these species can be seen in the industry: to check the fermentation of cheeses and dairy products, alcohols and in medical treatments such as the production of toxins in the use of cosmetics and the manufacture of antiviral agents in the pharmaceutical industry.

The presence of these types of bacteriological pathogens are normal within the human organism, but it can determine the appearance of infections, whose severity depends mainly on the pathological capacity or virulence of the species in question and the characteristics of the host. Introduced by food or water, they cause intestinal problems when adhering and crossing the barrier of the gastrointestinal mucosa, manifested by diarrhea and dehydration.

Name of some bacteriological species and diseases that cause the human organism.

Enterobacteria include organisms that are pathogenic to humans such as Escherichia coli or Salmonella, especially important in infant mortality in developing countries. Many of these spices are immune to common antimicrobials such as penicillin, methicillin and clindamycin.

• Use filters that use a peculiar way of trapping the solid and sandy parts of the water as a purification mechanism.

• Perform constant analyzes to know the state of the water.

• Do not keep standing water in vases or tanks exposed.

The study and bacteriological evaluation of the water of the communal network of the May 20 sector of Santa Bárbara de Zulia, Venezuela, was made with the intention of raising awareness among the community of the sector and surrounding communities to use their own water purification methods, and also to that they carry out periodic laboratory analyzes so that they can diagnose the current chemical status of the water they consume, and in this way be able to take the pertinent sanitary measures.