Remembering my Grandmother -- on the 1 year anniversary of her passing 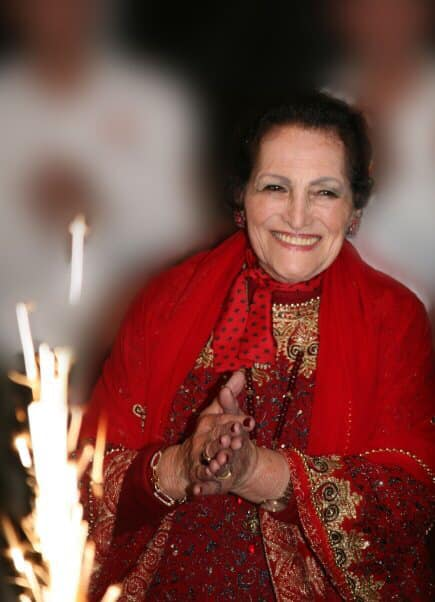 Tata Rabiha Dajani lived by her own rules. She married my grandfather, a celebrated musician and poet whom I was named after (Yahia Lababidi) when she was merely a teenager and he was in his thirties. When he passed away and she remarried she never lost her love of music. Nor her independence, when her second husband, a well-known historian and educator, also passed away.
Raising four children as a single woman did not cramp her style, either. She was a remarkable figure and lived many lives: Palestinian activist, educator and pioneer in the Arab world as well as a source of inspiration to many. My dear grandmother became a kind of public figure and even lived her private life, outloud, as though performed before an invisible camera.

In fact, there were many photographs and video cameras she employed, as her own best archivist — with closet loads of images and film documenting her various incarnations and life events. This, in addition to the memoirs she published later in life, unapologetically sharing herself with the world, so that her many triumphs and human-all-too human flaws could also be known, publicly, and thereby help to ensure her immortality. Throughout life's up and downs, my Tata loved to party, even as she approached ninety, inviting musicians over to her house and hosting hundreds —- she would sing, dance and outpace people a fraction of her age, myself included. My ageless grandmother's birthday fell on a leap year, and she liked to divide her age by four and joke that she was younger than all of us (which she was, in spirit).

My Tata was a coquettish, loved to flirt and, gently, scandalize. 'I want to be naughty, but still be nice' went a little ditty she was fond of reciting, along with some racy jokes, she told till the end. Here's a naughty-nice quip she was fond of telling at dinner tables: men love a woman who steals, lies and swears... Steals their heart, lies in their arms, and swears she loves them! Badda... boom

Her love of life & playful mischief were contagious and I saw her as more than family: a wise friend, confident and mentor, since childhood and through her last years. Tata was a disciplinarian, it came with the territory being a school headmaster, and would let you know when she did not like something. But, she was also a ton of fun, and could get on the level of kids.

I remember visiting her as a tiny person in her home in Kuwait--where she through lavish, legendary parties-- and in the downtime, we'd get in costume (along with her staff who were game & she treated as part of the family) and put on plays. When she learned that as 12-year old I was mad for Michael Jackson and would stand outside his hotel in London for hours, just to catch a glimpse of him, she got in on the action and offered up a bedsheet of hers which we turned into a banner declaring our love for MJ :)

In retrospect, I realize what a formative influence she also was on me as a writer, since she spoke to me in sing-songy, witty-wise aphorisms (her own and others) before I even knew what they were. And, I'm glad to say I've been told I had the same smile as her, with half moon eyes ... But there was more of a perpetual twinkle in hers -- like she was in on some private joke or off to a great adventure. Impossible to do justice to her rich life and multi-faceted personality with a story or two -- there were so, so many & she was an incorrigible storyteller -- but, permit me to share another short story with you to illustrate the kind of life-loving spirit she had.

I was visiting my paternal grandmother with my wife, some years go for Christmas, when she lived in Amman, Jordan. It was my wife's first time to meet her, but we expected her to be sleeping when we arrived in the evening, and that we would see her the following morning. Yet, my eccentric and adorable granny was waiting for us in the kitchen, all decked out like a glittering Christmas tree herself, and impatient to go out to a party! 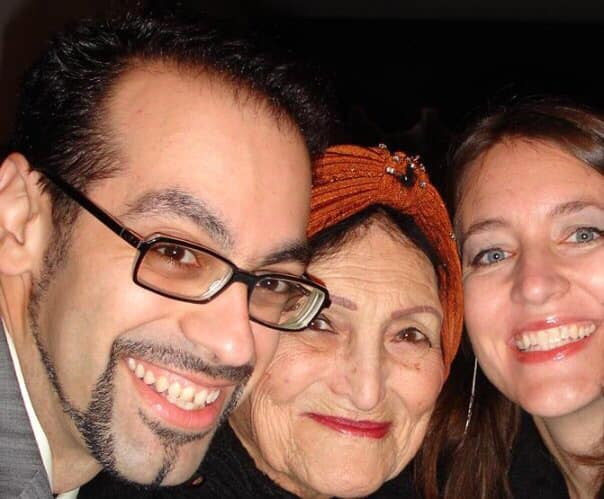 Quickly, take a shower, and let's head out she instructed us, before returning to work on her Christmas greeting cards. She was in her late eighties at the time, and did not drive. Unfortunately, her driver was not there, either, so she asked my wife (who was visiting the Middle East for the first time) to do the honors. But, wait, the plot thickens.

The car had no breaks, one working headlight and we did not have the address to the home we were invited to! Nevermind, my irrepressible granny was still in a great mood and my wife... well, high on adrenaline! The plan was for me to get out of the car and knock on doors of homes that looked like they might be celebrating. Luckily, I got it right early on in the game and we ended up having a fun Christmas party with kids caroling and all! At the end of the night, around 2 in the morning, our hosts pulled my wife and I, aside, and whispered:

Make sure she gets home, safely. Last year, after our party, your grandmother went party hopping...

Well, we were pooped and the dear octogenarian party-animal consented to head back home. When we returned to the US, she confided in me that she checked into a hospital after our departure to recover.

I forgot that I was old she confessed.

Bless your heart, beloved Tata and may you have as much fun in the next life as you did in this one.

The morning following her passing ((March 25, 2020) I awoke refreshed after a vivid, celebratory dream I had last night, featuring dear Tata, with much singing and dancing. I really believe she visited me for a parting, partying send-off... At the end of this marvelous dream/visitation, just before Tata and I got in a car together heading to the airport, she handed me a small gift. Which makes strange sense of a small gift that I received late last night, out of the blue -- that I've come to think was from Tata, too. Thank you!