Messi Moves Ahead Of Ronaldo To Break Hat-trick Record 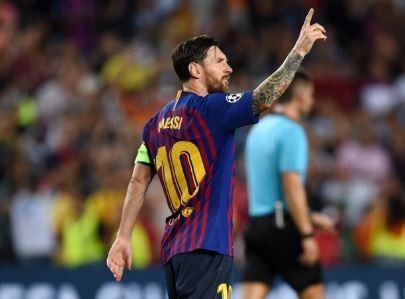 Lionel Messi broke a tie with Cristiano Ronaldo as his eighth Champions League treble made him the most prolific hat-trick scorer in the competition's history, earning him more high praise from Barcelona boss Ernesto Valverde.

The Argentina superstar had been level with Ronaldo, but lit up Camp Nou with an incredible performance in Tuesday's Group B encounter.

Barca had struggled for the opening half hour, but a vintage Messi free-kick broke the deadlock. After a wonderful individual effort from Ousmane Dembele, Messi scored twice in the final 13 minutes, which also saw Samuel Umtiti sent off.

He now has 48 hat-tricks in his remarkable career, and has netted more Champions League goals than PSV, scoring 103 to their 102, leaving Valverde to lavish praise on the 31-year-old.

"Messi is normal because we always see it," Valverde said to the Champions League TV channel. "In any of us it would be abnormal, but he does extraordinary things and makes them routine."

On the free-kick, he added: "We needed to unclog the match. It was masterful.

"It was difficult to make the first goal, in the second half we started well, dominating the game, but at 1-0 there was danger, with the second goal we were calmer."

While Messi's record-breaking showing made a fine start for Barcelona, the club are looking to break rival Madrid's stranglehold on the Champions League, which the La Liga side have won the last three years

Asked about Barca's desire to end the dominance of their arch rivals and win the competition themselves, Valverde said: "Who is not motivated for the Champions League?