Mike's Choice (plus original fractal art by me) Word Prompt: A Fork In The Road 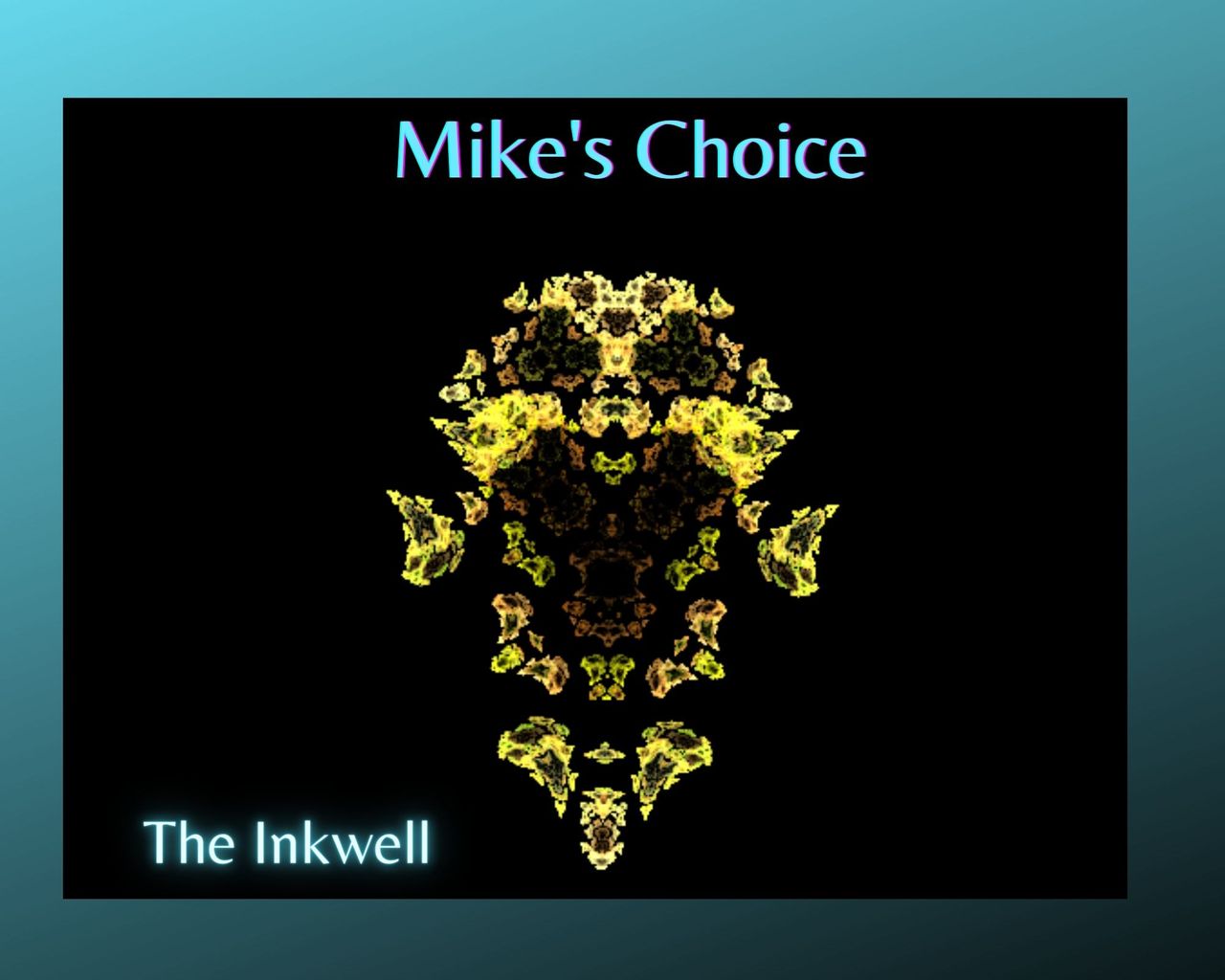 I am stranded on a strange world. None of the intelligent beings have fur except on the very top of their heads. And they mostly prefer sitting to moving around. I'm here to study them, and assess if they are candidates for first contact. Oh, did I mention that they are giants?

My ship was damaged as I entered the planet's atmosphere. It could not float because of the damage. Instead it's on the bottom of a vast body of water.

I was fortunate to have the strength to make it to land. It took three days, despite the currents being in my favor.

I was exhausted and hungry. Taking a chance, I slowly approached one of the structures. Outside of it I saw a cylinder.

The wonderful aroma coming from it drew me instantly. Soon my powerful torso was inside, while my back legs were sticking in the air.

"Mike, did you remember to put the lid on the trashcan?"

"Whoa!!! What's that?" a voice said. I froze, hoping that I wouldn't be discovered.

"What a cool toy!" said a voice, as strong hands gripped my waist.

Then the alien put a disc shaped object over the wonderful smelling cylinder, and fastened it. I still hadn't moved. I was hoping it would think that I was dead, so that I could escape. Or at least activate the translator which had been designed by my predecessor, who was gifted in the sciences of language and technology.

The alien decided to carry me by an arm, so I went limp. It was painful, but it gave me a chance to flick on my translator without alerting the huge creature.

"Guess what someone threw away, Mom. It's the coolest figurine I've ever seen, it almost looks like it could get up and walk."

"It's soaked, I'm going to take it in the bathroom and use the hairdryer on it. You'll like it much better if it's dry."

"Yes dear, a dirty soaked object from the trash really doesn't sound very appealing. You can show me later when it's clean and dry."

I was then taken into a smaller room, and placed in a sort of small pool. Suddenly warm water was streaming all over me. But this water was different, there wasn't any salt in it. And it felt so good! It cleansed my fur, and the warmth restored sore muscles.

Once I was clean, the alien took me out of the pool, and dried me with a cloth. It then plugged in a machine, and turned it on. The thing was so loud that I jumped, and tried to get away.

"What? This can't be a toy!" said the alien, quickly grabbing my waist. I struggled for all I was worth, but it was hopeless.

I was placed gently down in a massive pool similar to the first, but this one was empty. I sincerely hoped it would remain that way.

"Can you understand me?"

I had never tested the speech option of my translator, though the designer had made sure it was fully functional of course. It hadn't seemed necessary for me to get used to it. I was only to make first contact in an emergency.

Adjusting the speech box so it rested against my vocal cords, I made first contact. It definitely qualified as an emergency. And I wasn't exactly giving away the secret of my people's existence. I had already been discovered.

"Hello, please don't harm me. I am a scientist, here for peaceful purposes. My ship was destroyed entering your atmosphere."

"First can you please hand me that cloth so I can finish drying off? I appreciate the warm water, but I really would like to be dry now. I have been in water for three days."

"Sure, but the hair dryer would be faster." he said, holding the monstrous machine.

"Nah. Let me show you." said the alien, flicking a switch and pointing it at its own head. It laughed as its only fur, which was on top of the head, flew in every direction.

It did look effective. The creature slowly lowered it, and pointed it away from me. This gave me the opportunity to gradually test it out. It was warm air! I have never felt anything so good.

Once I finished, the kind alien turned off the machine. "What would you like to do now?"

"I need something to eat. Whatever you have in the cylinder will be perfect."

"That was garbage. Waste. I can get you something much better. My name is Mike. I am a human male, fifteen years old."

"My name in your language would be CobCob. I am a CooVoo male, 350 years old."

"Wow, you're even older than Grandpa. Do you want to go choose something to eat?"

The alien named Mike gently picked me up, and carried me into a room with a large rectangular box. He opened it, and a light came on.

"What would you like?" he asked, lowering me for a better look. Once I selected my meal by smelling the objects, Mike took me into yet another room.

"You can eat your fruit in here, let me lock the door so Mom and Dad won't walk in and see you moving around."

"What are you going to do with me?" I asked as I ate the best food I had ever tasted. I had guessed from his actions and age that he was not fully grown yet.

"I don't know yet... You would make an awesome pet. But I think you're more of a person than an animal."

"Yes, I am from an advanced civilization. I would deeply appreciate my freedom, but I would also like to stay here for a while."

And so I settled in. I will try and find a way to contact my planet. Otherwise I will just have to wait until I am missed. The beacon in my translator will be strong enough to be detected by the search party, once they are on the planet's surface.

Mike's choice most likely cemented the future friendship of the CooVoo and Human races. I look forward to getting to know him, and telling him about my people as well. I did come to learn as much as possible about Humans, after all.

Image of alien is my own original artwork made in Apophysis. Edited in Canva to add text, background, and border.