My smart phone tells me it's the 17th of May today - hence the Norwegian constitution is 207 years old.

This year I'm celebrating the national day in Bohuslän, Sweden. I rarely have celebrated the national day abroad, and for sure never in Bohuslän. Båhuslen is actually not Swedish, but Norwegian territory, only reason why it's considered to be Swedish is that some Danish overlords gave it away to Sweden in 1658. We have a secret plan of taking back the control through property purchases and tourism ... oups, did I just spill the secret? Nevermind. Bohuslän is totally Swedish territority, and there are no Norwegians whatsoever having the slightest interest in spending time there.

The Swedish national day (a couple of weeks later) marks the end of the Kalmar union in 1523, the Norwegian national day marks the end of the union with Denmark in 1814 - so at least that thing in common - a break with a union with Denmark. Denmark was "giving away" Norway to Sweden in 1814. Some Norwegians was trying to ignore that, created a realatively democratic constitution (a quite progressive one compared to most constitutions in Europe) and declared Norway to be an independent country. Now, the Swedes weren't that much impressed, there was a war, and the result was inevitable - the Swedes won big time. However, we outsmarted the Swedes in the negotiating. While the Swedes considered Norway to be a Swedish colony, we actually kept the constitution and an independent Norwegian parliament - eventually, the parliament was overthrowing the Swedish king in 1905. We were sort of expecting the Swedes to continue the war they started in 1814, but luckily they were either too friendly or too lazy to do that.

I ate the breakfast in a bakery shop in Strömstad. Strömstad is admittedly right by the Norwegian border, and I suppose that in non-pandemic situations there would be more Norwegians than Swedes eating breakfast in the bakery shops in Strömstad at the 17th of May - and while sitting there, a Norwegian lady dressed in national Norwegian clothes entered the bakery - those traditional clothes are rarely used on other days than the 17th of May. For a minute or two, seeing the lady and the pram she was pushing, it was just like if I would have been in Norway. It almost felt like being in Båhuslen rather than Bohuslän. (Perhaps in some few hundred years, when we've purchased all the property in Båhuslen, we can reclaim it as Norwegian territory. Oups, did I say that out loud?) 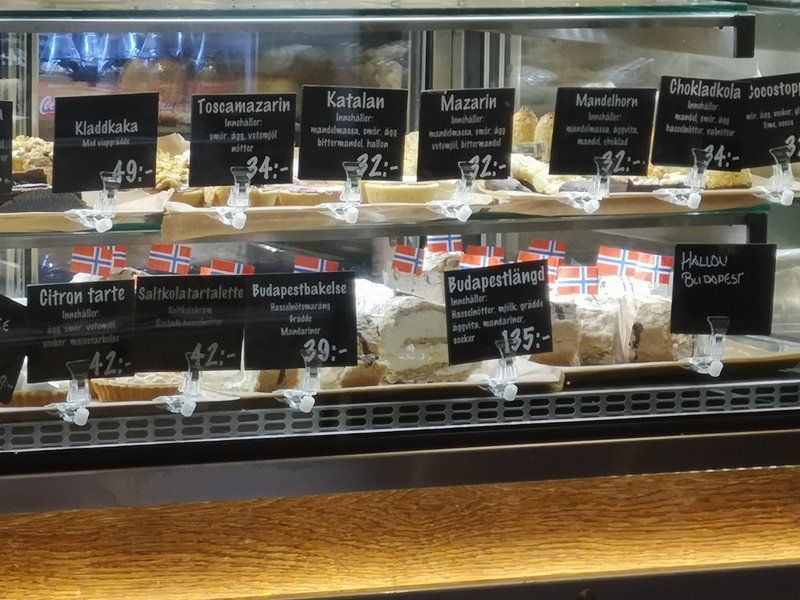 I couldn't stand the temptation, eventually I had to have a piece of that cake. 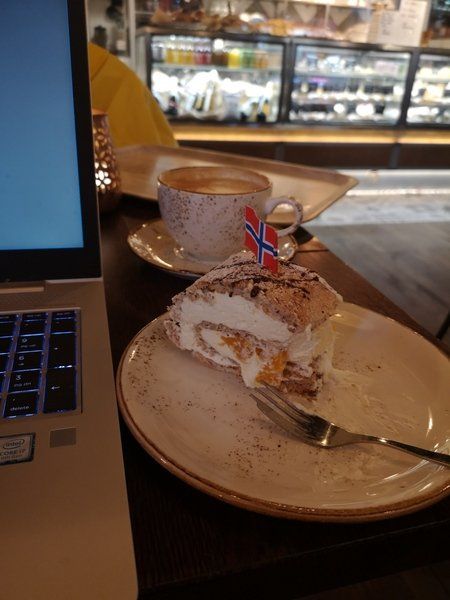 I eventually left Strömstad, but kept on listening to Swedish radio (FM radio! In Norway the FM radio has been mostly shut down. I'm binging on FM radio every time I'm outside Norway). I believe it's national radio and not local radio ... but also from chatting with Swedes, I realize one thing: The Swedes are a lot more aware of the Norwegian national day than what Norwegians are aware of the Swedish national day. (I've just passed Gule Humpen, a place name in Båhuslen that is known by few Swedes, but that can be frequently found in Norwegian boating forums ...)