I am excited to start my Art talk series up again and what better place than Florence, Italy!

I went to Florence on a humanities tour of Europe during college and it was amazing. One of my favorite time periods in art history is the Italian Renaissance. I was so excited to get back to this city that is the birthplace of the Italian Renaissance and Michelangelo. This trip I got to share the amazing art and architecture with my brother and sister.

We did a three hour Walks tour, The Best of Florence Walking tour with David and the Duomo!

Piazza San Marco was the meeting point for the tour.

Note: You can click on all photos to see them larger if you're using steempeak.com Here are me and my sister after we checked in for the tour. If you saw my Venice Post you will recognize my new scarf!

I enjoyed smelling and taking pictures of the roses while we waited for the tour to start.

The walk from our Airbnb to to Piazza was awesome! I was so excited to be in Florence and get a good in depth tour.

Note: I was going to do the whole tour, there are too many great things to share. I am going to start with the Galleria dell' Accademia in this post and continue the tour in a future post. The Gallery of the Academy of Florence is a art museum in Florence, Italy. It is home a large collection of Florentine art work, most notably Michelangelo's David. The lines are long and one reason we chose this tour of Florence is to be able to get into the museum quicker. It was founded in 1784 by Pietro Leopoldo, Grand Duke of Tuscany and has over a million visitors annually. 1

Hall of the Colossus

This hall was opened in 1950s along with the Byzantine style rooms. This sculpture was created in 1574-1582 and is of three figures Giambologna made of a single block of marble. AMAZING!

Rape of the Sabine Women by Giambolgna is the first sculpture we saw as we walked into the museum and the Hall of the Colossus. The dramatic lighting and the movement and energy from the sculpture completely caught my attention.

Giambologna lived from 1529-1608. He was born in France when Michelangelo was 54 years old. He moved to Rome, Italy in 1550. Three years later he came to and settled in Florence where he became one of the Medici's most important court sculptors. 1 A picture of Giambologna 1 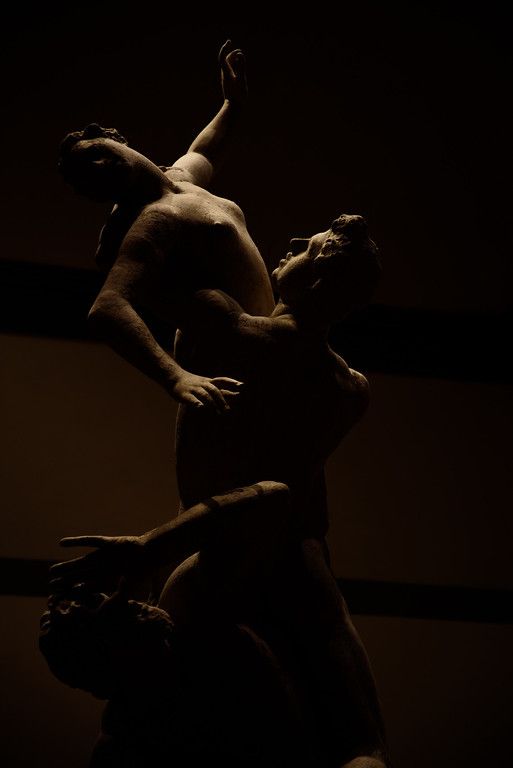 Another view of the sculpture in the Accademia A copy outside in the Loggia dei Lanzi

Hall of the prisoners

The hall gets its name from four of the sculptures by Michelangelo called the Slaves, or Prisoners or Captives. They were started as a project for the tomb of Pope Julius II della Rovere. The figures were to be a part of the tomb which had more than 40 figures and was to be located in St. Peter's Basilica in Rome. 2 A map of the hall of prisoners 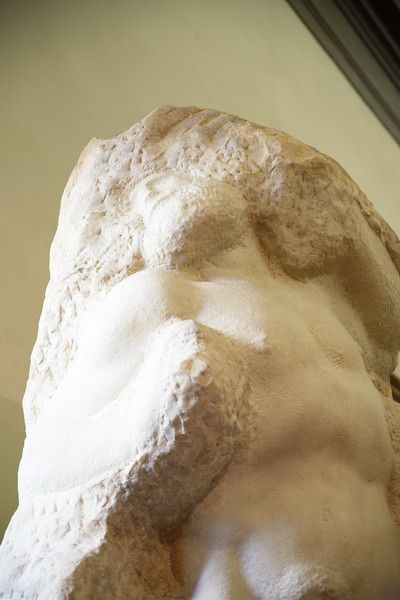 Kristen taking a picture of Atlas

There are two other sculptures in the hall of prisoners, the Peita di Palestrina and St. Matthew Detail of the knee of St. Matthew Originally it was thought to be done by Michelangelo, now it is mostly considered to have been completed by someone else, such as Niccolo Meghini or Gian Lorenzo Bernini 3

Later, when we get to Rome and are touring St. Peter's Basilica we will see Michelangelo's Pieta. It is amazing and something to look forward to.

The ability of Michelangelo to sculpt the human body like this in the 1500s is amazing to me. These statues are the perfect statues to see right before the David. They line the hallway leading to the David. It is powerful to see that they are still working their way out of the stone. I love the movement and struggle. The tribune is a square shaped location within the Accademia with a large skylight made to house the David. Truly one of the most magnificent pieces of art I have ever seen. The detail of the veins, bones and flesh are astounding. I have read Irving Stone's The Agony and the Ecstasy so many times. One of my favorite parts is when the drive to understand the human body causes him to dissect bodies. For me, I am such a rule follower and I don't know if there is anything that I wanted to know that much. Whether it is true or not the detail of the David is stunning.

David is 17 feet (5.17 meters) tall and carved out of single block of marble. David is a Biblical hero and became the symbol of Florence. A copy of the statue was first placed in the public square outside the Palazzo Vecchio. In 1873 it was replaced by a replica and the David was moved to it's current location in the Accaemia. 4 Other galleries in the museum

Some great Pre Renaissance art. I have a thing for Madona and child or mother and child art! A glimpse of our tour guide A close up of the painting

The next part of the tour will take us to Medici Riccardi Palace, the Baptistry and Gates of Paradise, The Florence Doumo, the Orsanmichele church, the Palazzo Vecchio, the Piazza della Signoria and the ponte vecchio. I am excited to take you on the rest of the tour of Florence with me.