TOP 3 PLACES TO VISIT IN STOCKHOLM,SWEDEN Stockholm City Hall is one of Sweden's premier construction works in the national romantic spirit. The town hall was designed by architect Ragnar Östberg and was opened at Midsummer's 1923.

The town hall consists of about eight million bricks and has a 106 meter high tower with the Swedish national armed forces three crowns in the top. Behind the famous facade are offices and meeting rooms for politicians and officials as well as grand party rooms and unique art.

The City Hall's largest banquet hall is the Blue Hall. Here are hundreds of festivals, ceremonies and events held each year. The idea was that the hall would turn blue, but the architect changed and chose to keep the red brick wall. But by that time the name of the Blue Hall was so established that the hall was hot despite it being blue.

The Blue Hall is Scandinavia's largest organ with about 10,000 pipes and 135 polls. In early 2007, the organ was sent to England for a comprehensive refurbishment, in November 2008, returning to the Blue Hall in improved condition.

It is in the Blue Hall as the world famous Nobel prize will be held December 10th each year. The prize ceremony takes place in Stockholm Concert Hall and after that they reach approximately 1300 guests to the City Hall for the stately feast. After dinner in the Blue Hall, Nobel Prize guests take the stairs up to the Golden Hall to dance. The walls of the Golden Hall are covered by approximately 18.6 million mosaic pieces of glass and gold and are the work of Einar Forseth, the artist.

The Mosaic forms portraits of people and events from Swedish history in Byzantine inspired style. The fund wall is dominated by the Mälardrottningen, which symbolizes Stockholm "praised by Österland and Västerland". On the other side of Borgargården from the Golden Hall, the Council Hall is located, where the Stockholm City Council meets every three weeks. The interior of the council hall is magnificent and the 19m high ceiling is inspired by the Viking era. The public hearers can seat about 200 people.

The furniture in the Council Hall is designed by Carl Malmsten and the textiles are designed by Maja Sjöström. South of the Council Hall is the centuries-old vault, which is the city hall's honorary entrance and leads directly into the party hall. The room forms the basis of the 106 meter high tower. The name comes from the 100 vaults found in the roof and symbolizes the city council members in 1923.

On one wall is the clock show Sankt Göransleken, which circulates to the outside of the City Hall at 12 o'clock and at 18 o'clock every day during the summer, to the tunes of Örjanslåten. The next room is Ovalen, which has been named after its oval shape. The room is designed after the more than three hundred years old Tureholm stairs that adorn the walls and are woven in Beauvais, France.

In the Oval, bourgeois weddings are commuted every Saturday. Along the southern long side of the town hall lies the Prince Gallery, which is mainly used for the city's reception receptions. Through the row of windows along one long wall you have a magnificent view of the interior of Lake Mälaren and of Södermalm. This panorama is reflected on the opposite wall in an al fresco created by Prince Eugen, who was an artist and brother of King Gustav V. South of the Golden Hall, the hall is three crowns. This square room has been named after the three chandeliers. Two of the walls are adorned by side draws designed by Maja Sjöström and on the third wall, the 17th century "Stockholm from Mosebacke" hangs by Elias Martin. There is also a large open-air shop by Ernst Spolén. 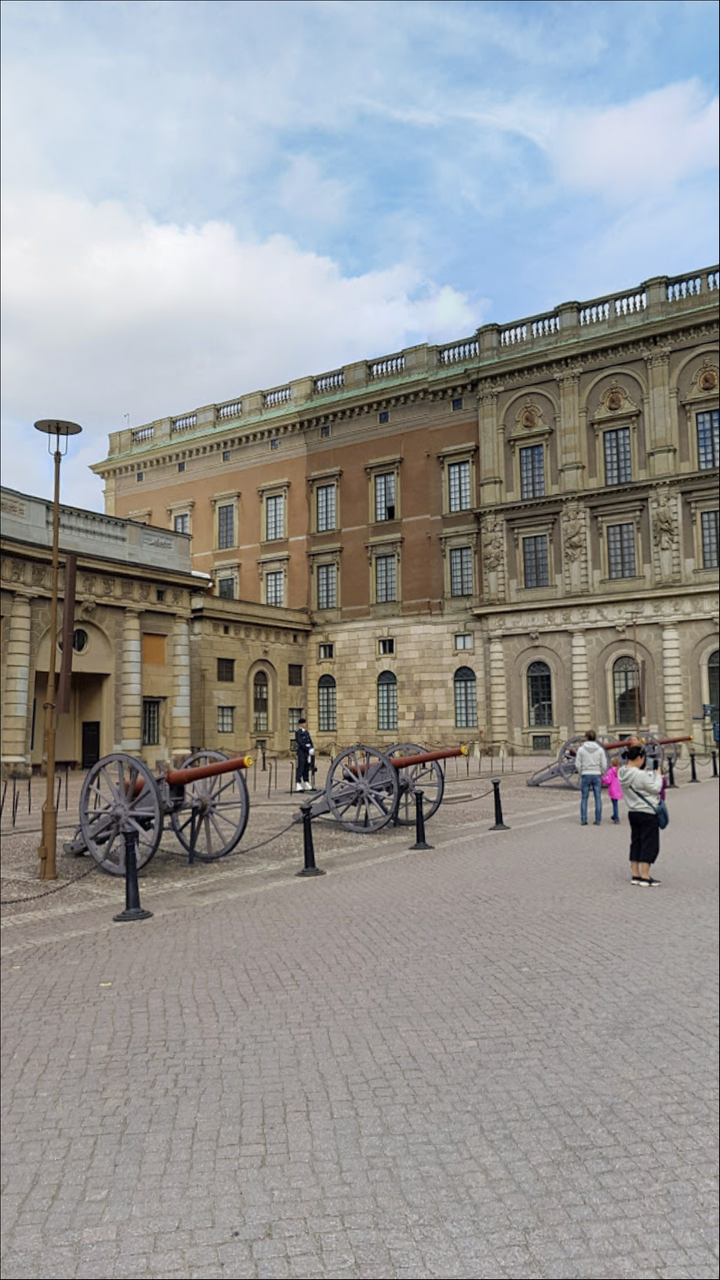 The Royal Palace in central Stockholm is the official residence of the king and essential parts of the monarchy representation take place here. The castle is also a daily workplace for the royal couple and for the offices that are part of the Royalty. Court.

With this combination of royal residence, workplace and cultural heritage monument open to visitors all year round, the Royal Palace is unique among Europe's royal residences.

The castle is built in baroque style by architect Nicodemus Tessin the younger and shaped like a Roman palace. The castle has more than 600 rooms spread over seven floors with the paradrums beyond the city and the smaller living spaces towards the inner courtyard.

The castle houses many sights. In addition to the castle's paradise halls, there are three museums with royal history - The Treasury of the National Regimes, the Three Crowns Museum depicting the castle's medieval history and the Gustav III antique museum with antique sculptures. Her guns could throw out over three hundred kilos of ammunition and when the lead-bulb balls left the mouths went on with the speed of the sound. If Vasa had sailed, she would certainly have been one of the world's heaviest armed ships.

Vasa had 64 cannons when she resigned at her maiden voyage in August 1628, but eight of the canon doors were empty so there was room for more. On the upper and lower battery tires there were a total of 48 so-called 24-pound, powerful guns that shot over ten kilograms of heavy round balls that went with the speed of sound as they left the mouth. On the upper deck were smaller cannons.

The canons on each side of the ship could fire a good breeze over 300 kilograms of ammunition at the same time - it's about four times as much as in many of the warships of the early days. Vasa was supposed to be a fast ship with the ability to catch up with the enemy, and if she had sailed properly, she could very well have been the biggest fear of the Baltic Sea.

Rather hurt than kill

Of the crew's intended crew of just over 440, 300 would be soldiers. The goal of a maritime battle in the 1620s was mostly not to lower the resistance craft, but to conquer them and make them part of their own fleet. Battle at sea at Gustav II Adolf's time could begin as a large-scale battle between two fleets, but most of the time developed into a number of different types of teams, often duels between two ships. The vessels fired their cannons against each other. Heavy bullets that hit the hull created explosions of wood splitters that could kill or seriously injure many soldiers and boatmen. Some bullets were specially designed to damage the masts and sails, such as chainsaws and scissors, and they were used to make it difficult for pilots to control and not fly. The cannons could also be loaded with wooden containers filled with muskulos and metal scrap that would hurt as many people as possible at once. One would rather hurt than to kill, because one injured one would hold several others when they helped him.

In order to avoid fire aboard, boatmen climbed into the rig and blew the sail and made sure to have animal skins on hand to quickly fire firebags.

The goal was to board the enemy ship and conquer it. When the ships lay side by side, the attacking side soldiers turned over to the enemy armed with axes and cocks. It was often the beginning of a horrific bloodbath.