I know I probably should be posting about other things on steemit and not just steemit but to heck with it!

I think we can all agree that the attention economy is an interesting phenomenon but the concept of an ATTENTION MARKET is much more exciting. But when I try to be realistic and consider how exactly advertising will pay people instead of platforms for our attention, I get a bit stumped.

But I did a lot of thinking about it and here's how I imagine advertising MIGHT work on the steem blockchain.

Advertiser pays a small amount to every viewer of the advert... This is where it gets tricky but we'll get to that!

Bidding for your attention!

When we write a post on steemit.com (or soon busy.org) there are a few things we have to select before we can post. These are the title, tags, our choice of how we distribute the rewards and the 'upvote post' checkbox. Optionally, after writing the post, all of this could appear either in a little pop-up window, or where we normally fill in these details, we could have an extra option to view an advert from the highest bidder (the one with the biggest upvote).

We could have several advertisers who want to advertise on our content if we have a large following. And all of these advertisers could try to buy our attention with 100% the weight of their upvote! But to avoid ruining the steemit posting experience and to encourage advertisers to hold SP, we should only ever have to see one advert per steemit post. 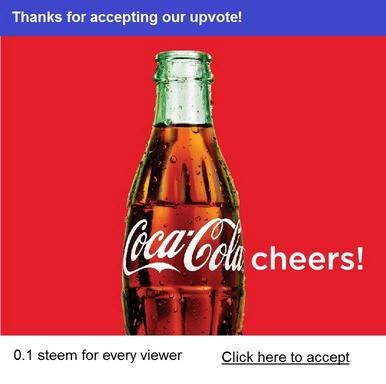 Whether or not we accept this advert on our page, we still get the advertisers upvote for viewing it. We can choose to accept or decline based on the content of the advert, our audience demographic, and the price the advertiser is willing to pay our audience!

Disclaimer: I have absolutely no idea if we have or will have the technology to actually detect which steem accounts viewed an ad on steemit. I am still stumped over how exactly that would work (unless only clicks were paid for) and couldn't say if anybody even has plans to directly pay the viewer.

Accepting the advert would not authorise the advertiser to place any ad they like on your blog but it would allow them to place the ad on any one of your posts, until they choose to take down the ad. This would mean that we could get regular upvotes from advertisers who see our audience as their favoured market as they continuously change their advertisement.

Steemit recently introduced the views metric, which has notably disappeared but where the stats for this comes from is an important factor of making this work. As said, I have no idea if this even can work. Maybe we are already being paid for our attention through curation. But there are a lot of upvoting accounts that do not read or view the content as suggested by the views metric ratio to upvotes on many posts.

The other tricky part is choosing your own price as a viewer. If the viewer also has a minimum price to see an advert then advertisers may be forced to compete on price to get our attention! In the longrun, you could have more than enough advertisers to take up space on your post, but they could be target marketing to those of us who give away our data. Those of us who choose to give away our data could put a much higher price on our attention, as advertisers are willing to pay more for target markets.

I look forward to learning what is possible with this market for attention. If anybody can clarify how the technology could accomodate pays for views or whether or not the blockchain can actually detect from which accounts a post was viewed, I would greatly appreciate your input!